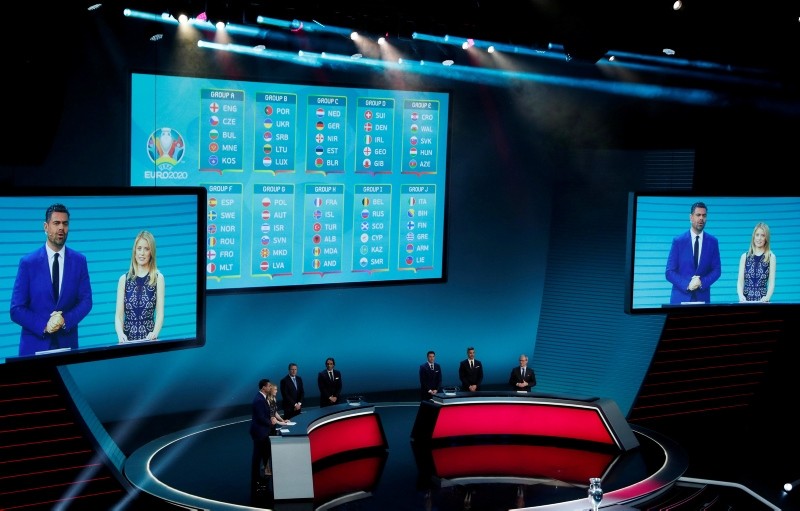 The qualifying groups are shown on the video screen during the UEFA Euro 2020 European soccer championship qualifying draw at the Convention Centre in Dublin, Ireland, Sunday, Dec. 2, 2018. (Reuters Photo)
by Daily Sabah with AP Dec 02, 2018 12:00 am

Turkey will face World Cup champions France in a challenging qualifying group for the 2020 European Champship after being paired together in Sunday's draw in Dublin.

Along with France, Turkey will also face Iceland, Albania and Moldova in Group H matches.

Usually staged in one or two nations, UEFA has distributed games across Europe to celebrate 60 years of the competition after finding it tough to find a single suitable host.

The tournament will open in Rome on June 12 before ending in London at Wembley Stadium, which will stage both semifinals and the final on July 12.

Before then, qualifying begins in March for the first continent-wide European Championship that sees no host nation guaranteed a spot. Two teams qualify from each of the ten groups.

Former champions Germany and the Netherlands will meet each other in Group C alongside with Northern Ireland, Estonia and Belarus.

England has a seemingly smooth path to the finals, when it could host two games in the group stage at Wembley. Gareth Southgate's side was drawn alongside Czech Republic, Bulgaria, Montenegro and Kosovo, which is in qualifying for the first time for a European Championship.

Defending European champion Portugal was drawn in Group B alongside Ukraine, Serbia, Lithuania and Luxembourg.

Italy, which failed to qualify for the World Cup, is in Group J with Bosnia-Herzegovina, Finland, Greece, Armenia and Liechtenstein.

Belgium, FIFA's top-ranked team which reached the World Cup semifinals, will return to Russia in Group I and also face Scotland, Cyprus, Kazakhstan and San Marino.

Spain, the 2008 and 2012 European champion, is in Group F with Sweden, Norway, Romania, Malta and the Faeroe Islands.

Croatia, which reached the World Cup final for the first time in July, is in Group E with Wales, Slovakia, Hungary and Azerbaijan.