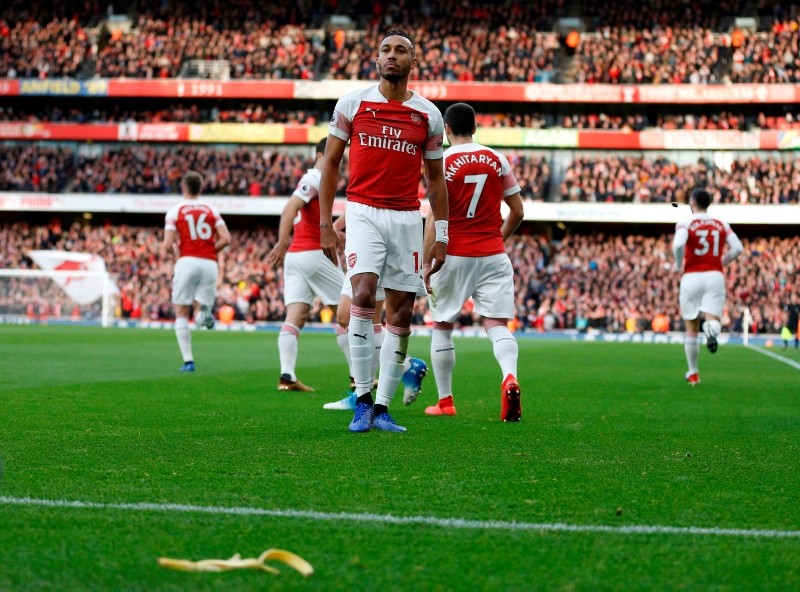 A banana thrown from the crowd is seen at the side of the pitch as Arsenal's Gabonese striker Pierre-Emerick Aubameyang (C) celebrates after scoring the opening goal (AFP Photo)
by Dec 03, 2018 12:00 am

A football fan has been arrested after a banana skin was thrown onto the pitch at the Emirates Stadium as Arsenal forward Pierre-Emerick Aubameyang celebrated scoring a penalty in front of Tottenham fans.

The Gunners won a memorable match 4-2 on Sunday and London's Metropolitan Police afterwards confirmed that seven arrests had been made.

Britain's Press Association said it understands that one of those arrests came after a banana skin was hurled from the away end as Aubameyang celebrated scoring in front of the Tottenham fans.

"Behaviour such as this is completely unacceptable and the supporter in question will be issued with a ban," a Tottenham spokesman said.

There were also six arrests for public order offences -- at least two of which are believed to be Arsenal supporters who lit smoke canisters during the match.

Former Arsenal and England forward Ian Wright, speaking as a pundit on BBC television, said: "I've played against Spurs and I've taken a lot of abuse from Spurs but never ever has it been racial.

"Now Spurs have to deal with this because some idiot has done that. It's not only embarrassed Spurs but it has embarrassed the Premier League because it has gone around the world."

Gabon forward Aubameyang opened the scoring on Sunday with his 10th-minute spot-kick and, after Tottenham had replied through Eric Dier and a Harry Kane penalty, then equalised early in the second half.

The unrest was not restricted to the stands as the two sets of players had to be separated following Dier's equaliser on a feisty afternoon in north London.

The England midfielder celebrated by putting his finger to his lips, with Arsenal substitute Stephan Lichtsteiner reacting angrily to the gesture and referee Mike Dean showing Dier a yellow card.

Both clubs were charged by the Football Association on Monday with failing to ensure their players conducted themselves in an orderly fashion over the melee that followed Dier's goal.