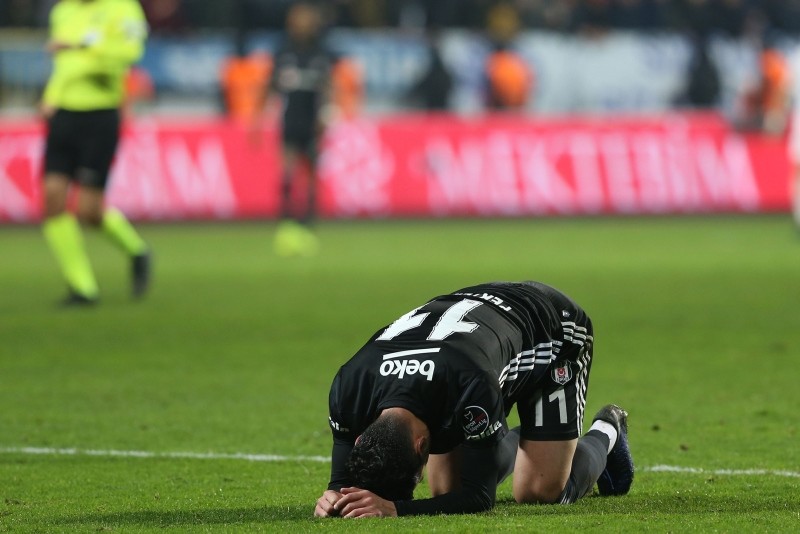 After a devastating 4-1 loss to Kasımpaşa on Saturday in the final match of the first half of the season, only a few points separate Beşiktaş, who has dropped to sixth place, from its other rivals

Beşiktaş lost 4-1 to Kasımpaşa in week 17, wrapping up the first half of the Turkish Super League in a worse place than it started. A disappointing run in the Europa League, a poor defense and underperforming scorers added to the Black Eagles' woes this season with the club already suffering from financial problems.

In a worst-case scenario, sixth-placed Beşiktaş, which currently has 26 points, can drop a spot or go up one depending on what the outcome of the last games before the league draws a curtain on the first half.

Kasımpaşa handed the Black Eagles a heavy 4-1 defeat on Saturday evening as Mbaye Diagne scored a brace. Beşiktaş started the away match attacking as they found a goal in the second minute with 22-year-old player Dorukhan Toköz, however, the Video Assistant Referee (VAR) disallowed the goal because of a handball by Jeremain Lens during the attack. Kasımpaşa, responding to Beşiktaş attacks, quickly got ahead in the score sheet as Kosovan player Loret Sadiku's clean strike to the right side of the net beat Black Eagles' Loris Karius in the 11th minute.

Kasımpaşa continued the pressure as they found another goal in the 19th minute with Mbaye Diagne, but it was also disallowed for a prior foul play during the attack. Diagne did not stop searching for goals as he scored his 19th goal of the season in the 45th minute to give his team a 2-0 lead just before halftime.

Beşiktaş, in the second half, bounced back with a header goal from Mustafa Pektemek in the 52nd minute. However, Kasımpaşa took absolute control after Beşiktaş' goal, first Mbaye Diagne scored a penalty kick for his 20th of the season, then Czech midfielder David Pavelka scored in the 83rd minute to beat Beşiktaş 4-1.

Kasımpaşa increased their points total to 29 after the match, they are now in the second spot, six points behind Medipol Başakşehir.

After consecutive titles in the past season under coach Şenol Güneş, the Black Eagles are failing to repeat past success this season. The team has only garnered 26 points in the first half and failed to secure a victory in its last three games after a good start to the new season.

In the last 10 weeks of the season, Beşiktaş's points have eroded along with its offensive gameplay that brought the team goals in the past week while its defense has suffered.