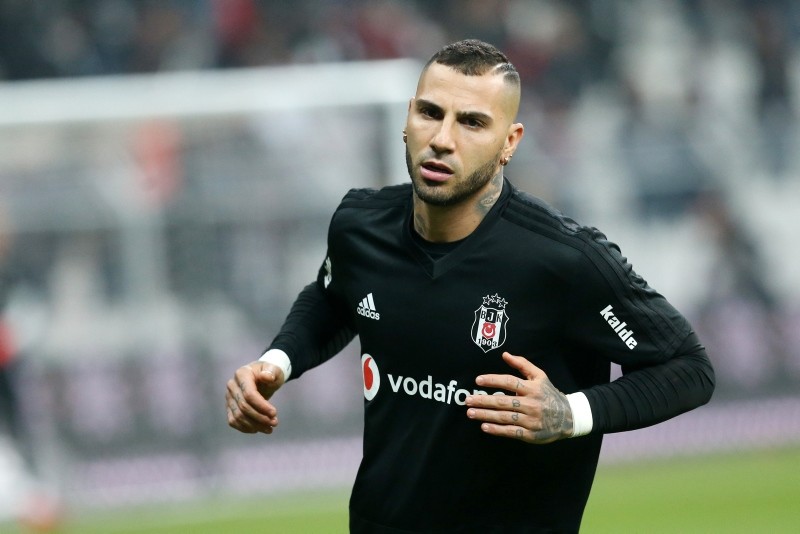 Portuguese midfielder Ricardo Quaresma, who is in a pay dispute with Beu015fiktau015f, is on the list of players to be sold. (AA Photo)
by Compiled from Wire Services Jan 03, 2019 12:00 am

After a week of rest, Super League teams are set to begin some intensive training sessions during the midseason break. Most of the teams will travel to southwestern Turkey's Antalya for week-long training before the 2018-19 season resumes. The players will also get an opportunity to polish their skills in a number of midseason friendlies.

A number of former Super League heavyweights, including Fenerbahçe, Galatasaray and Beşiktaş, will all look to rescue their season in the second half after a disastrous opening to the season.

Some of the teams are missing a number of key players, while others are clinging on to hopes that new signups will help improve their standings.

Medipol Başakşehir, who closed the first half in first place with 35 points, six points ahead of its closest rival Trabzonspor, started training in Istanbul and will travel to Antalya on Jan. 5 for a 10-day session, including two friendlies.

The league leader was one of the first Turkish Super League sides to boost their lineup, with the signing of Brazilian forward Robinho, who played for clubs like AC Milan, Real Madrid and Manchester City.

Başakşehir's Edin Visca, meanwhile, was rumored to be interested in a move away from Istanbul. The Bosnian footballer concluded the first half with six goals and seven assists. He is in Fenerbahçe's radars but Başakşehir is unlikely to let him go, especially at a time it is reportedly considering minimizing midseason transfers.

Meanwhile, title holders Galatasaray will be training between Jan. 2 to Jan. 12, with a friendly against Leipzig on Jan. 12. The Lions dropped to fifth place in the Super League but are nowadays busy with the fate of Serdar Aziz and Eren Derdiyok, two players that coach Fatih Terim plans to part ways with, according to media reports.

Galatasaray also aims to boost its offensive gameplay and are looking to sign two new forwards and a defender in the transfer window.

Beşiktaş, which ended the first half in the seventh spot with 26 points, will miss six of its players during midseason training that will start today in Antalya.

The Black Eagles went into the midseason break after a tumultuous period, losing seven points in the last three matches. The poor run has put coach Şenol Güneş's tenure at risk. The club management, however, expressed full backing for the veteran coach and reportedly plans to extend his deal by one more year.

The Black Eagles decided to not bring six players they put on the transfer list to Antalya, including Ricardo Quaresma and Tolgay Arslan. Quaresma, who is in a pay dispute with Beşiktaş, is on the list of players to be sold while Arslan spent most of the first half on the bench.

Other players to miss the training are Tolga Zengin, Vagner Love, Cyle Larin and Gökhan Töre. Beşiktaş, which suffered from the lack of an accomplished center forward in the first half, aims to fill the void with Trabzonspor's Burak Yılmaz.