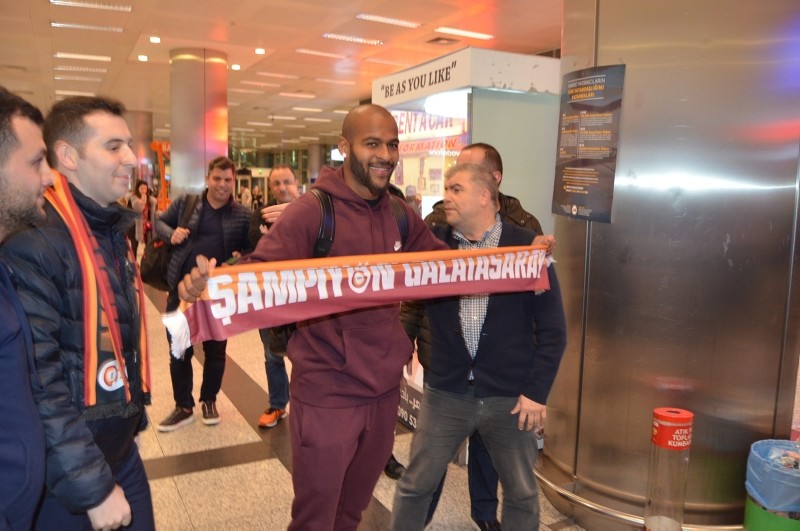 Clubs are scrambling, or rather slowly inching, toward signing new players ahead of the second half of the season. Galatasaray brought in Brazilian defender Marcao while Fenerbahçe reportedly made its move to sign Demba Ba

The January transfer window opened on Jan. 4 and will close at the end of this month, but Turkish clubs look reluctant to sign new players, as was the case last season. The slow transfer window somewhat livened up with the arrival of Marcao Teixeira, the Brazilian defender of Portugal's Chaves, to Galatasaray late Monday. The 22-year-old player arrived at Atatürk Airport with little fanfare.

Marcao, who joined Chaves' defense for one last match Sunday, scored three goals this season for the Portuguese side in 24 matches.

He is the second transfer in the midseason break for the Lions bought Turkish defender Emre Taşdemir from Super League side Bursaspor.

He signed a two-season deal with Galatasaray, who ended the first half of the 2018-19 season in the fifth spot with the 29 points it shares with three other teams.

The Istanbul giant, meanwhile, sold Dutch-born midfielder Garry Rodrigues for $10.2 million to Saudi Arabia's Al-Ittihad last week. Fenerbahçe, which is in the relegation zone, has set its sights on veteran Shanghai Shenhua striker Demba Ba, according to Turkish media reports.

The team's new coach Ersun Yanal, who took the helm near the end of the first half of the season, is eager to enlist Ba and the Yellow Canaries have reportedly made their first bid to the Chinese outfit.

Senegalese forward Ba played for Beşiktaş in the 2014-15 season and rejoined them in 2017 on loan from China's Shenhua. After a brief spell with newcomer Göztepe, he returned to Shenhua last summer. Ba, who became the subject of chants in every match he played for Beşiktaş, won the hearts of fans with his performances, especially during his first season with the Eagles. In 46 matches, Ba scored 28 goals and made seven assists. He also shined for Göztepe scoring seven goals and making one assist in 13 games. However, his streak was somewhat dimmed in Shenhua where he scored only five goals in 17 matches.

French media outlets reported that Fenerbahçe was also interested in Dieumerci Ndongala, the Congolese forward of the Belgian side Genk.

The 27-year-old player, who spent most of his career in Belgian clubs, has scored five goals and made seven assists this season in the Jupiler Pro League, the Europa League and in the Belgian Cup.