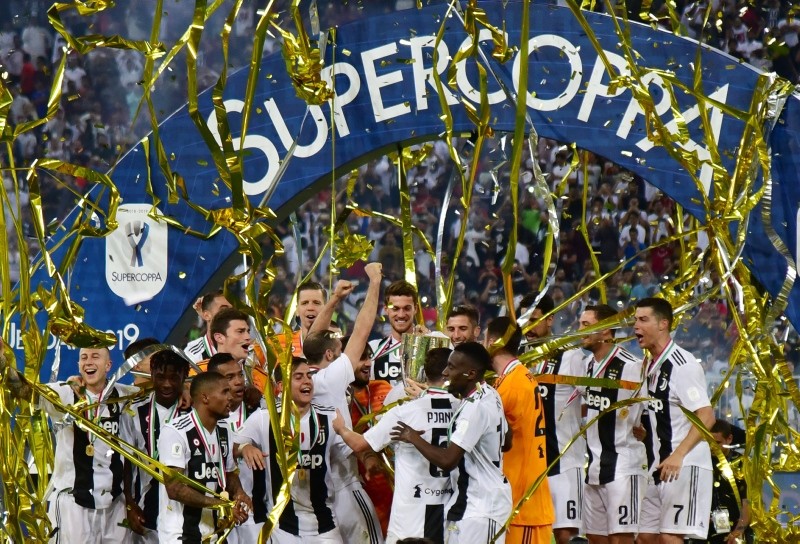 Cristiano Ronaldo scored the only goal to hand Juventus their first trophy of the season with a 1-0 win over ten-man AC Milan in the Italian Super Cup on Wednesday in Saudi Arabia.

Ronaldo -- signed by the Italian giants last year from Real Madrid as they target a first Champions League title since 1996 -- headed in a 61st-minute winner.

AC Milan played the last quarter of an hour a man down after Ivorian midfielder Franck Kessie saw red for a bad tackle on Emre Can.

"I have my first title with Juventus so I'm happy," said the Portuguese star who now has 28 trophies including five Champions League and league titles from England and Spain, and a European Championship with Portugal.

"This is only the start, we'll take it one step at a time. We've got this cup, now we must keep working hard to achieve the next trophy," warned Ronaldo.

The match had been overshadowed by controversy with calls for it to be relocated over human rights issues in Saudi Arabia with women only allowed to attend the game if they were accompanied by a man.

Italian football league president Gaetano Micciche hailed the match as a success, with reports there were up to 15,000 women among the 62,000 crowd in the stadium.

"It was a wonderful evening, a festival of sport in a full stadium," said Micciche.

"I hope that it's the starting point for social evolution in this country."

On the pitch the players suffered in the heat with temperatures hitting 25 degrees Celsius amid freezing conditions in northern Italy.

In the end Juventus came away with a record eighth Super Cup title, one more than AC Milan who have won seven.

"It was very hot and the important thing was to win," said coach Massimiliano Allegri who won the trophy for the second time, having lost to AC Milan in 2016 and Lazio last year.

"Ronaldo? We always say the same thing... that's why we signed him. He is decisive and scores big goals, but the whole team put in a good performance."

AC Milan forward Gonzalo Higuain only played the final 20 minutes against his parent club, ahead of a touted move to Chelsea, having moved away from Turin to make way for Ronaldo last summer.

Coach Gennaro Gattuso said the Argentine was suffering from a fever and missed the team photo because they were afraid he would infect other players.

"It might seem like a joke, but it's true. Higuain wasn't in the picture when the Saudi Prince came to visit because I was afraid the virus would spread among the other players, so that was my decision.

"He had a fever last night, we did everything to get him better, but he didn't play much, so I preferred a fresher player."

Milan's best shot on goal was a Patrick Cutrone effort after the break with their hopes dwindling after Kessie's sending off.

"We had to climb a mountain and we tried," said Gattuso.