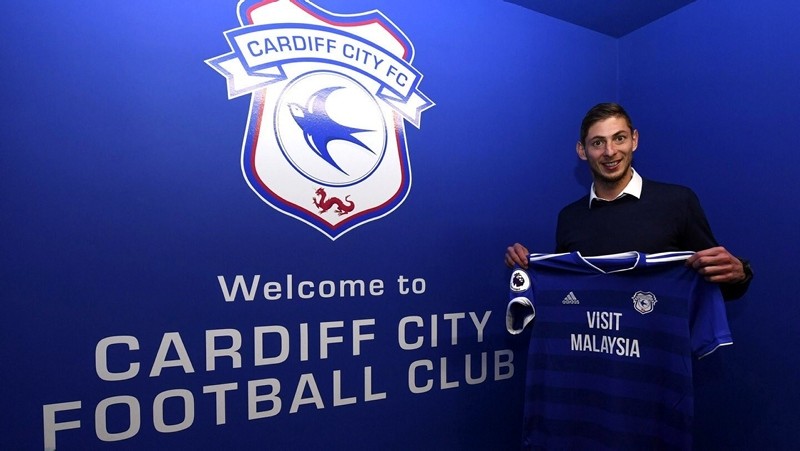 Police have suspended Tuesday the search for a light aircraft carrying Cardiff City's new signing Emiliano Sala after it disappeared over the English Channel en route to the Welsh capital for the football player to make his club debut.

Guernsey police searching for the small passenger plane that disappeared near the Channel Islands said "a number of floating objects have been seen in the water."

They have been unable to confirm whether any of the objects are from the missing plane, and that they have "found no signs of those on board."

"Search and rescue operations have been suspended as the sun has now set," police said on Tuesday evening. "The current plan is for (them) to resume at sunrise tomorrow."

Police added that if any passengers landed in the water "the chances of survival are at this stage, unfortunately, slim."

Sala, signed on Saturday from French club Nantes for a reported club record fee of 17 million euros ($19.3 million), was flying to Cardiff aboard a small plane that disappeared from radars around 20 kilometres (12 miles) north of Guernsey on Monday night.

French civil aviation authorities confirmed that 28-year-old Argentine "was on board the plane". It is thought there was one other passenger on the aircraft.

A statement from police, a British island just off the coast of France, said the pilot had requested to lower his altitude shortly before air traffic control in neighboring Jersey lost contact with the plane. After a search was called off on Monday because of high winds, two helicopters, two planes and a lifeboat joined renewed efforts on Tuesday morning to find the single-propeller plane.

Cardiff called off a training session planned for Tuesday morning, while Nantes have had their French Cup tie against third-tier side Entente Sannois Saint-Gratien postponed from Wednesday until Sunday.

When he put pen to paper at relegation-threatened Cardiff on Saturday, Sala, who also has Italian nationality, said in a statement: "I'm very happy to be here. It gives me great pleasure and I can't wait to start training, meet my new team-mates and get down to work.

"For me it feels special (to be the club's record signing). I have come here wanting to work and to help my team-mates and the club."