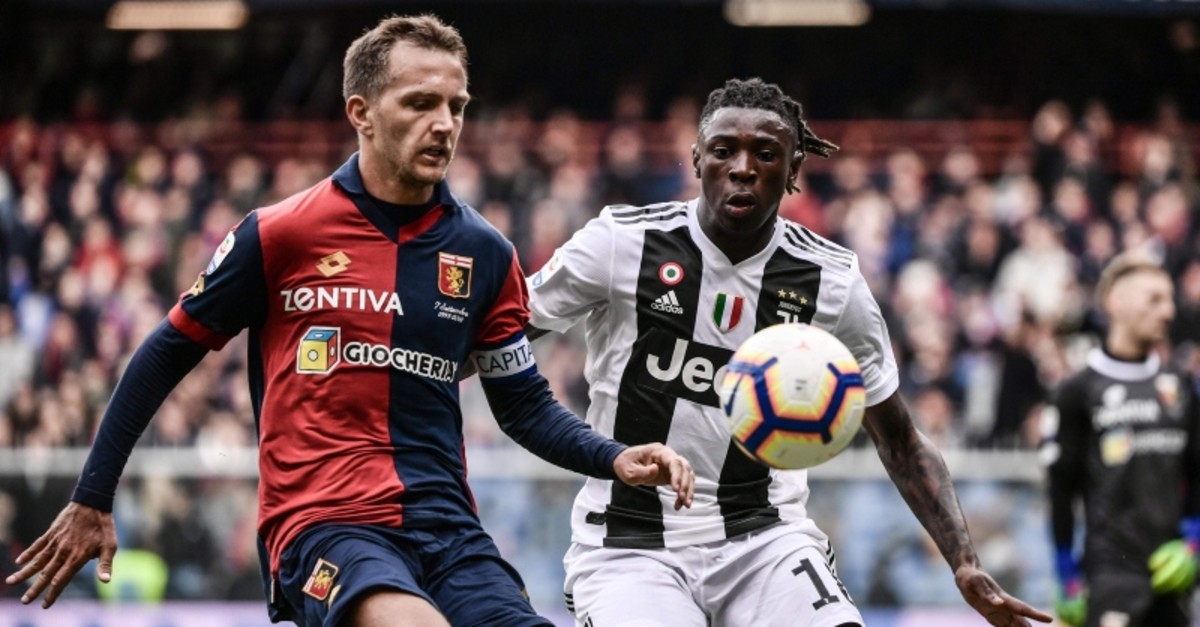 Genoa's Italian defender Domenico Criscito (L) and Juventus' Italian forward Moise Kean go for the ball during the Italian Serie A football Match Genoa vs Juventus on March 17, 2019 at the Luigi-Ferraris stadium in Genoa. (AFP Photo)
by Mar 17, 2019 12:00 am
Juventus fell to their first Serie A defeat of the season on Sunday as Genoa ran out 2-0 winners days after the Turin club's Champions League heroics against Atletico Madrid.

Stefano Sturaro, who joined Genoa on loan from Juventus in January before the deal was made permanent, put the home side in front in the second half before fellow substitute Goran Pandev secured the shock result with 10 minutes remaining.

Cristiano Ronaldo inspired a remarkable European comeback for the Italian champions on Tuesday when he scored a hat-trick to overturn a 2-0 first-leg defeat against Atletico and send his side through to the quarter-finals with a 3-2 aggregate win.

However, the Portuguese was left out of the matchday squad for the trip to Genoa and Massimiliano Allegri's side were sluggish as Genoa took points off them for the second time this season, having drawn 1-1 in Turin in October.

Juve had dropped points just three times this season going into the game, with draws against Genoa, Atalanta and Parma.

However, the hosts started the brighter as Christian Kouame forced a good save from former Genoa goalkeeper Mattia Perin before Cesare Prandelli's side were awarded a penalty for handball, only for a Video Assistant Referee (VAR) review to overturn the decision.

Juventus thought they had gone in front after the break when Paulo Dybala swept home a finish, but VAR chalked the goal off for an offside in the build-up.

Sturaro then curled a finish into the corner against his parent club just minutes after coming on, before Pandev made sure of the three points with a powerful finish.

Despite the result, Juventus remain 18 points clear of second-placed Napoli at the summit of the table, while Genoa climbed above Sassuolo into 12th place on 33 points.