Something new under the sun for Turkish national team 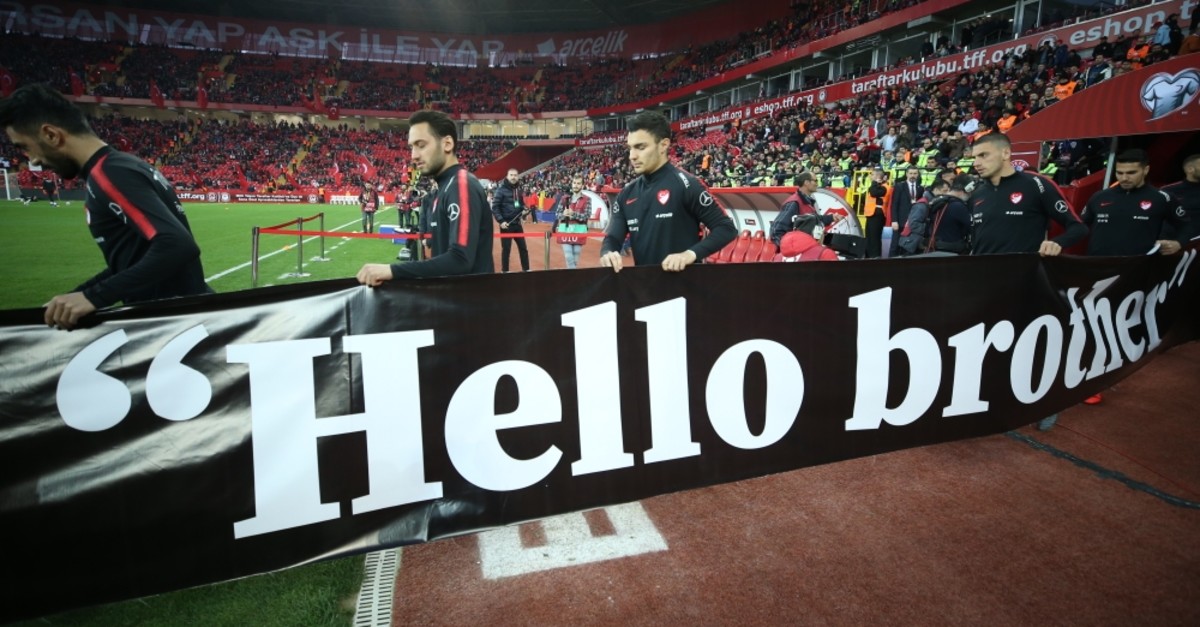 Before the match, the Turkish team carried a banner reading u201cHello, Brother,u201d the last words of Daoud Nabi who greeted the Christchurch attacker before the latter killed 50 Muslims in New Zealand.
by Yusuf Ziya Durmuş Mar 27, 2019 12:06 am

The Turkish national team doubled their victory tally in the Euro 2020 qualifiers with a 4-0 win against Moldova, promising a resurgence under new coach Şenol Güneş after a string of past failures

Patriotic slogans echoed across the packed stadium as players wearing their red and white jerseys responded to the cheers and applause of the fans, all holding the national flag. It was more like the Independence Day celebration when the Turkish national team took on Moldova in the Euro 2020 qualifiers Monday evening. After all, fans had every reason to celebrate the 4-0 win that came following a long winless spell for the national team.

The victory is the team's second in days under new coach Şenol Güneş, who led the team a 2-0 victory against Albania in the first match of the qualifiers campaign.

Güneş, who will return to his Süper Lig duty with Beşiktaş this week, is credited with the first "double" after 19 matches for the national team with his predecessor Mircea Lucescu in the helm. The Romanian coach was fired after a string of failures and Güneş had largely reshuffled the line-up after Lucescu's departure last month.

The first half of the match in western Turkey's Eskişehir ended 2-0, one scored by Hasan Ali Kaldırım in the 24th minute and the other by Cenk Tosun in the 26th minute. Everton's Tosun also brought the team's third goal in the second half while Kaan Ayhan added another in the 70th minute. Burak Yılmaz, meanwhile, missed from the spot in the 53rd minute.

President Recep Tayyip Erdoğan was among the fans watching the game at the stadium. The president, who is on a campaign trail for elections this weekend, made it to the stadium in the second half after flying from an eastern city where he held rallies. Erdoğan met with the team to congratulate them after the match. "You guys started good and you doubled the lead. You were all very good," Erdoğan, a former footballer himself, told the team.

Meanwhile, in a post-match press conference, coach Güneş said, "We showed our strength in two matches and got the results we deserved." He praised the "rich" offense of his players though he acknowledged they were "a bit slow" in the first half. Güneş' team will next take on France and Iceland, two powerful rivals in Group H. The team secured six points but Güneş says it was "unfortunate" to be playing back to back against Iceland and France. "But this is not an excuse. We have dreams and I am sure we are capable of making them come true," he added.

Turkey, which secured a historic third spot in 2002 World Cup under Güneş, dropped to League C in the UEFA Nations League under his predecessor Mircea Lucescu, who failed to secure a single win in the team's last four matches. Güneş will officially take office on June 1 after his contract with Beşiktaş ends. The team's last successful streak of wins was in 2016 and 2017, under Fatih Terim, the incumbent coach of Süper Lig runner-up Galatasaray. They won three games against Kosovo, Finland and Moldova. During Lucescu's tenure, the team suffered from seven defeats and six draws, along with four wins.

The highlights of Monday's game came from Burak Yılmaz and Cenk Tosun. Yılmaz scored a goal against Albania with an assist from Cenk Tosun and then he returned the favor, dishing out an assist for Cenk Tosun for his first goal against Moldova. Güneş is relying on a mix of young and veteran players for the qualifiers. Yılmaz, along with Emre Belözoğlu and Mert Günok of Medipol Başakşehir, who had not played under Lucescu, were brought back by Güneş after a long break.