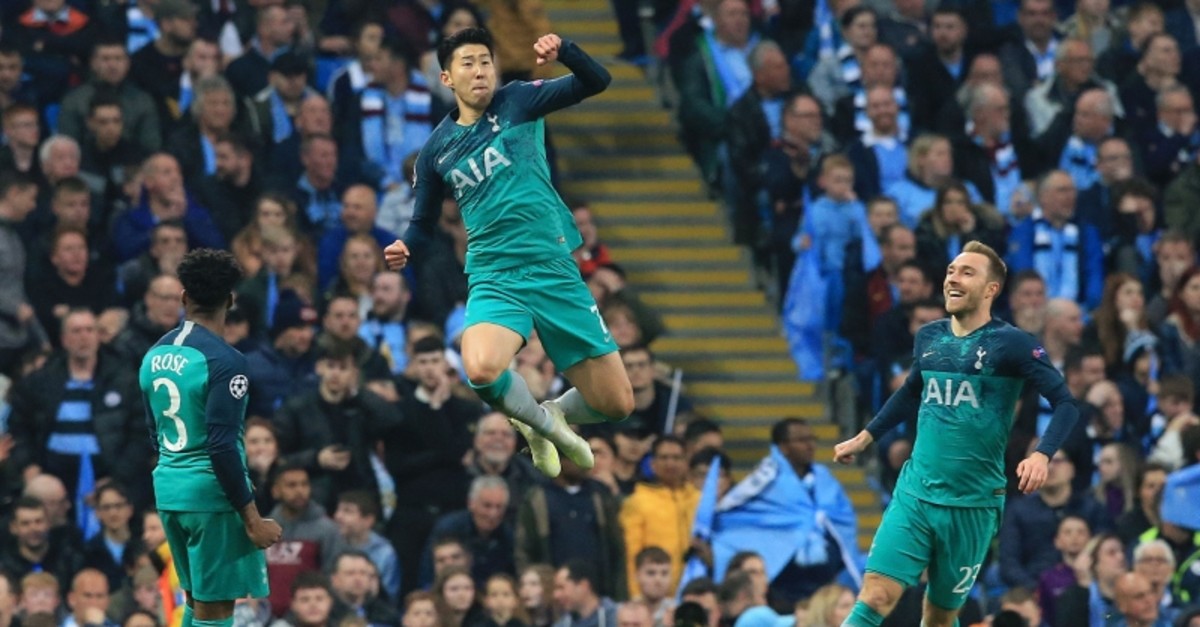 Fernando Llorente got the deciding goal with his hip as Tottenham Hotspur reached a first-ever Champions League semi-final on away goals after an extraordinary 4-3 defeat at Manchester City whose quadruple dream ended on Wednesday night after they had a stoppage-time goal disallowed.

A stunned Etihad crowd witnessed a tournament record four goals in the opening 11 minutes and watched in shock as a final City goal for 5-3 from Raheem Sterling was not given via the video referee for offside which saw Spurs through in a 4-4 aggregate.

Raheem Sterling and Bernardo Silva were on target for the hosts and Son Heung Min got a brace for Spurs in the frenetic oppening minutes.

Sterling made it 3-2 in the 21st and City were through when Sergio Aguero get a fourth in the 59th. But a corner-kick then hit Llorento on the hip from where the ball bounced into the net in the 73rd for 4-3.

"It was a crazy game," Son, who is suspended for the first semi-final, told Sky TV. "We fought well and deserved to advance. We believed we would get our chances. It is a game we will never forget."

Liverpool meanwhile completed a 6-1 aggregate win against Porto with a 4-1 in Portugal, with Mohamed Salah setting up Sergio Mane for the first and grabbing the second himself.

In what promises thrilling semi-finals on April 30/May 1 and May 7/8, Liverpool face mighty Barcelona while City take on giant-killing Ajax Amsterdam. The final is June 1 in Madrid's Wanda Metropolitano stadium.

Manager Pep Guardiola made several changes compared to the first leg, and one of the new men, Kevin de Bruyne, set up Sterling who cut inside from the left and curled past Hugo Lloris into the far right corner to level the aggregate just four minutes into the game.

But Spurs, without the injured Harry Kane and Harry Winks, responded in stunning fashion.

Son first levelled in the eighth from the edge of the area with goalkeeper Ederson not looking good by going down too early, and the South Korean then smashed the visitors' second two minutes later into the far right corner.

That however wasn't the end of a turbulent opening phase as City were back level at 2-2 less than two minutes later in the 11th when Bernardo Silva's effort got a vital deflection from Danny Rose.

It took City another 10 minutes to reclaim the lead in the 21st, de Bruyne crossing low from the through the goalmouth and Sterling tapping his second at the back post for 3-2.

Lloris made a super-save against de Bruyne's drive in the 54th but was beaten in the 59th when Aguero smashed into the far left corner off de Bruyne's feed for 4-3.

Llorente then had his big moment in the 73rd but the drama wasn't over until referee Cuneyt Cakir, after consulting the video referee, ruled that Aguero was offside in the buildup to Sterling's strike three minutes into stoppage time.

Thus ended one more attempt from City to win the elite event and also their quest for four titles, after having won the League Cup, being in the FA Cup final and fighting with Liverpool for the Premier League title - where they have another date with Spurs on the weekend.

There was not even remotely as much drama in Porto where Liverpool overcame a slow start in the 28th when Mane slid into Mohamed Salah's pass to score from point blank range and a video review confirming he was not offside as originally flagged.

Salah made it 2-0 in the 65th, Eder Militao got Porto's consolation goal before substitute Roberto Firmino headed Liverpool's third and Virgil van Dijk wrapped up matters late in the game.