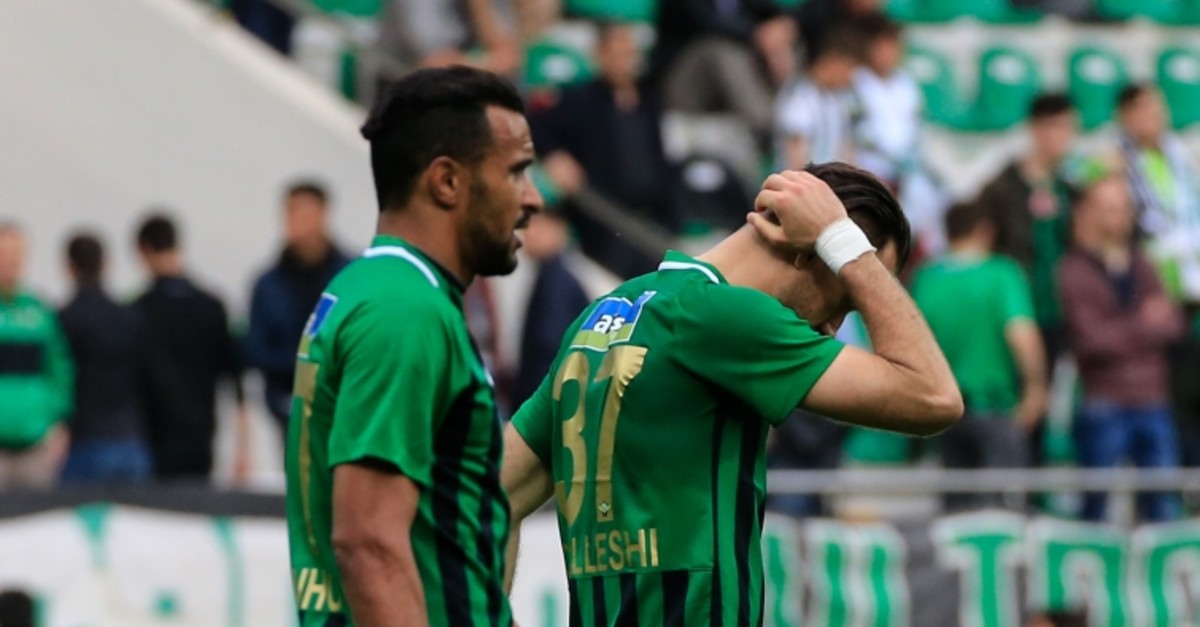 Akhisarspor players Sokol Chikalleshi and Sergio Borges (L) walk in frustration after a 2-0 loss to Evkur Yeni Malatyaspor, May 5, 2019.
by Compiled from Wire Services May 08, 2019 12:12 am

With just three weeks left in the 2018-2019 season, Süper Lig outfits in and around the danger zone are embattled in a last gasp race for points to avoid relegation. Calculations show that almost half of the teams face the danger of relegation, making the last three games even more crucial.

Bottom dwellers Akhisarspor will be the first to be relegated if it loses to Istanbul giant Fenerbahçe next week. Meanwhile, fallen powerhouse Fenerbahçe itself is also threatened with relegation and is currently just five points above the drop zone this season. Just above Akhisarspor and in 17th spot is Bursaspor with 30 points, two points behind Erzurumspor. Right above Erzurumspor in the 15th spot, Göztepe feels the heat of relegation with just 33 points. Akhisarspor, which carved an image of a promising newcomer in Süper Lig in the 2012-2013 season, gradually dropped near the danger zone and lost its last game against Evkur Yeni Malatyaspor 2-0.

After an away game to Fenerbahçe, which boasts a record of invulnerability at home, Akhisarspor will square off against İstikbal Mobilya Kayserispor at home before traveling to the central Turkish city of Konya to face eight-spot Atiker Konyaspor. Even a victory against Fenerbahçe will not be enough for Akhisarspor as better results by its rivals might still see it eliminated from the Süper Lig. The danger of relegation is not limited to teams at the bottom. Kasımpaşa in 10th spot is also among the eight teams facing the danger as most share the same points or very close. Only Çaykur Rizespor which collected 40 points and clinched to ninth spot is spared from the risk of relegation.

Fenerbahçe, going through one of its worst seasons in club history, managed to collect only 37 points in 31 weeks. It is currently tied with Demir Grup Sivasspor, İstikbal Mobilya Kayserispor and MKE Ankaragücü in terms of points. A victory against Kasımpaşa elevated them to 12th spot and Akhisarspor and Erzurumspor might seem easier rivals compared to Kasımpaşa. Göztepe, which hails from the football-mad western city of İzmir, will look to clinch three points in an away game against Bursaspor in Week 33.