Roma beat Juve to stay in race for European slots 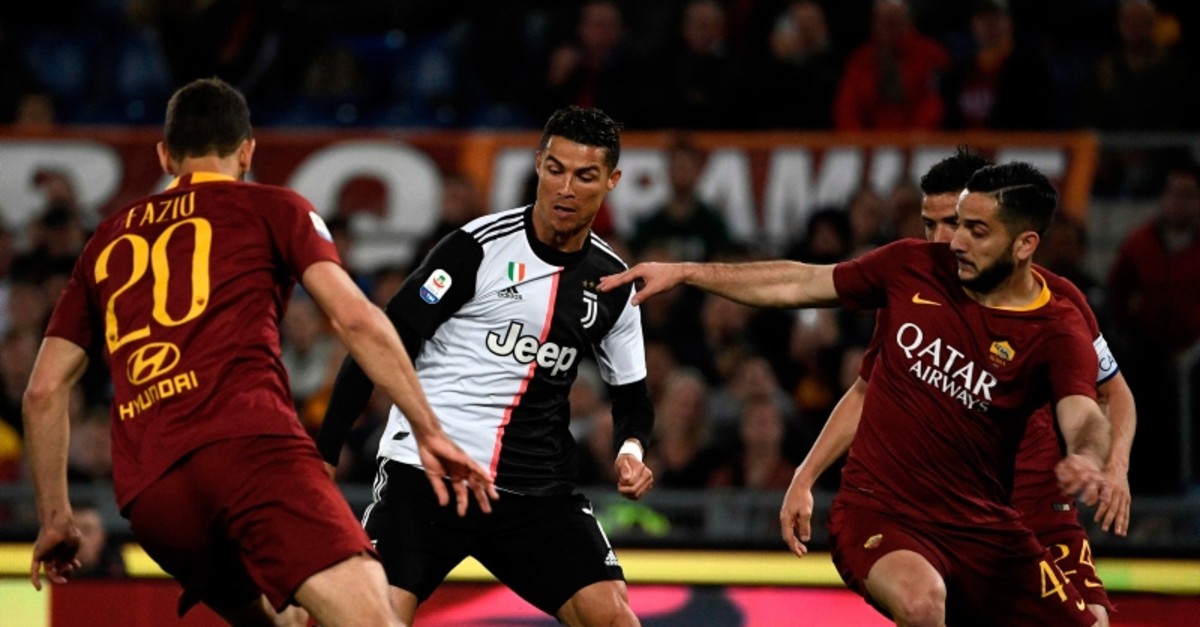 Juventus forward Cristiano Ronaldo (C) vies with Roma defenders Federico Fazio of Argentina (L) and AS Roma Greek defender Konstantinos Manolas during the Italian Serie A football match at the Olympic stadium in Rome, on May 12, 2019. (AFP Photo)
by May 13, 2019 1:48 am

Roma won 2-0 at home against Serie A champions Juventus Sunday to stay in the Europa League zone while eyeing the Champions League places with two games left.

The Rome Giallorossi sit sixth as AC Milan lead them head-to-head with a one-point gap from Inter Milan, who fill the fourth Champions League place before hosting relegated Chievo on Monday.

Inter hope to leapfrog third-place Atalanta when they play at relegated Chievo on Monday to close matchday 36. Bologna and Parma also battle to steer clear of the ladder's lower reaches on Monday.

At the Stadio Olimpico on Sunday Juve missed a first chance when Juan Cuadrado fired at goalkeeper Antonio Mirante, who also denied Paulo Dybala before Roma's first attempt from Lorenzo Pellegrini bounced off the bar.

The left post helped Mirante as he deflected another Dybala drive, but the Bianconeri lost steam after the break and saw home captain Alessandro Florenzi chip the ball past Wojciech Szczesny with 11 minutes to go, with Edin Dzeko finishing a counter-attack in stoppage time.

"I am satisfied," Roma coach Claudio Ranieri said after the match.

"It took a great Mirante to keep us into the game. We must continue to believe that everything is possible, but must get to the end with a clear conscience.

The Turin champions, who have already secured an unprecedented eighth successive title, wore a new shirt where the traditional vertical stripes are replaced by black and white halves split by a narrow pink line.

Earlier in Turin, seventh-placed Torino fought back with an Andrea Belotti brace to beat 10-man Sassuolo 3-2.

Captain Belotti missed a penalty before Sassuolo went ahead through a low shot by Mehdi Bourabia, who celebrated his goal by pulling his shirt over his head and was sent off for a second booking.

Belotti levelled for 1-1 after the break before Pol Lirola flicked in with his heel to make it 2-1 for the visitors.

The drop-zone battle saw Empoli win 2-1 at Sampdoria but they are still facing relegation in third-last, while Udinese won 3-1 at relegated Frosinone to stay two points clear of trouble alongside Bologna.

Stefano Okaka struck twice in the first half and Samir netted the other to help the Udine side go one point above Genoa, who lost 2-1 at Atalanta on Saturday.

Napoli had the second Champions League place already secured before winning 2-1 away to mid-table Spal.

After the break Brazilian Allan put the Neapolitans ahead with a clinical drive and Andrea Petagna levelled from the spot before Mario Rui's smashing winner.

Milan won 1-0 at Fiorentina on Saturday and Lazio won 2-1 at Cagliari.