A triumphant Süper Lig return for Gençlerbirliği and Denizlispor 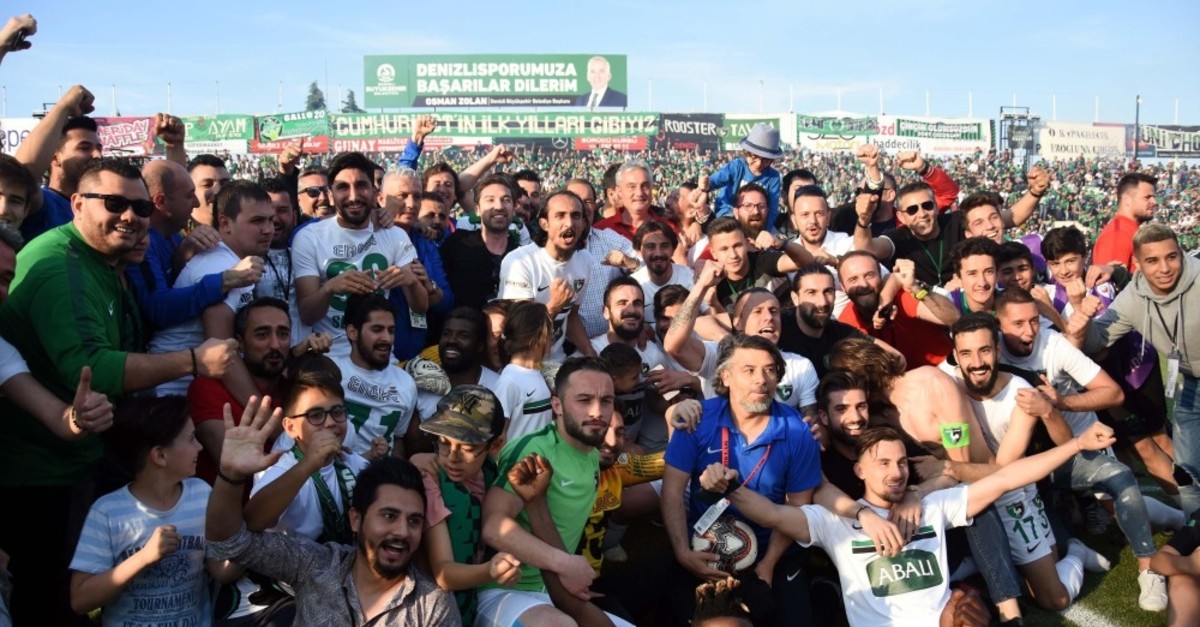 After a brief tenure in the second-tier league, Gençlerbirliği and Denizlispor celebrate their ascent to the Süper Lig

Turkey's Süper Lig will welcome two new but familiar teams next season as Abalı Denizlispor and Gençlerbirliği were promoted to the top-flight league from second-tier Spor Toto 1. Lig.

Denizlispor based in the eponymous western city, defeated Karabükspor 6-0 at home on Sunday while Gençlerbirliği of the capital Ankara beat Gazişehir Gaziantep 2-0 in an away match, securing the top two spots in their league, with 69 and 70 points respectively with only one week to go in the 1. Lig.

Gençlerbirliği players received a cheerful welcome upon return to the capital as hundreds of fervent fans rushed to hug the team as they exited the airport. The team's promotion marks almost a year of its relegation to the lower league. "We are very happy to be back in the Süper Lig a year later. You see people smiling and we made them happy today. It was thanks to great labor on the part of all players," the team's captain Selçuk Şahin told reporters as a jubilant crowd made a convoy to the team's facilities from the airport, accompanying the team's bus.

Gençlerbirliği players celebrate their win against Gazişehir Gaziantep that secured their place in the Süper Lig, May 12, 2019.

"It has been a tough season but we are back where we were on May 12 last year," Murat Cavcav, chairman of Gençlerbirliği said amid celebrations. "I made a vow and will take the [1.Lig] trophy to my father's grave. There is no greater happiness for the club," he said. His father İlhan Cavcav, who took the chair of the club in 1978, served as president until his death in 2017 and made a name for himself in Turkish football for taking the club from a third-tier league to the Süper Lig and his impressive scouting abilities that helped the club to boost its fortunes by selling unknown but successful players for high fees. "We want to show Ankara that Gençlerbirliği is a good team and can play better in the Süper Lig," Cavcav added. Gençlerbirliği will be the second Ankara-based team in the Süper Lig after MKE Ankaragücü which edged near the relegation zone this season. The league is currently dominated by Galatasaray, Medipol Başakşehir and Beşiktaş, three teams based in Istanbul.

Scenes of celebrations were also ubiquitous in Denizli late Sunday as Abalı Denizlispor returned to the Süper Lig nine years after its relegation. A massive celebration at the team's stadium was followed by a parade of torch-bearing fans in the city's main square. Chanting slogans lauding the promotion, fans later formed convoys that toured the city. Players did not join the celebrations as the club announced that a separate celebration will be held only after the team finishes the regular season.

Elsewhere, Akhisarspor lamented an end to their Süper Lig campaign as a 2-1 loss to Fenerbahçe cemented their place at the bottom of the league. This is the first relegation for the team in 25 years. Akhisarspor enjoyed a rapid climb to the top in the first half of 2018-2019 season but took a steep fall in the second half. The last time they saw a relegation was in the 1993-1994 season when they were relegated to the amateur league from League Three.

The team returned to the professional league the season after that and was promoted to the Second League in the 2007-2008 season before rising to 1. Lig in the 2009-2010 season and finally to the Süper Lig two seasons later. It exhibited a fluctuating performance in the seven years it fought for the top title in the Süper Lig though it was among the few teams to represent Turkey in European campaigns last year. Akhisar's relegation doubled the pain for its internationals Avdija Vrsajevic, Sokol Cikalleshi, Adrien Regattin and Elvis Manu. Vrsajevic, Cikalleshi and Regattin had previously experienced relegation from the Süper Lig while all three were in the lineup of Osmanlıspor while Manu was playing for Gençlerbirliği when it was relegated last season.