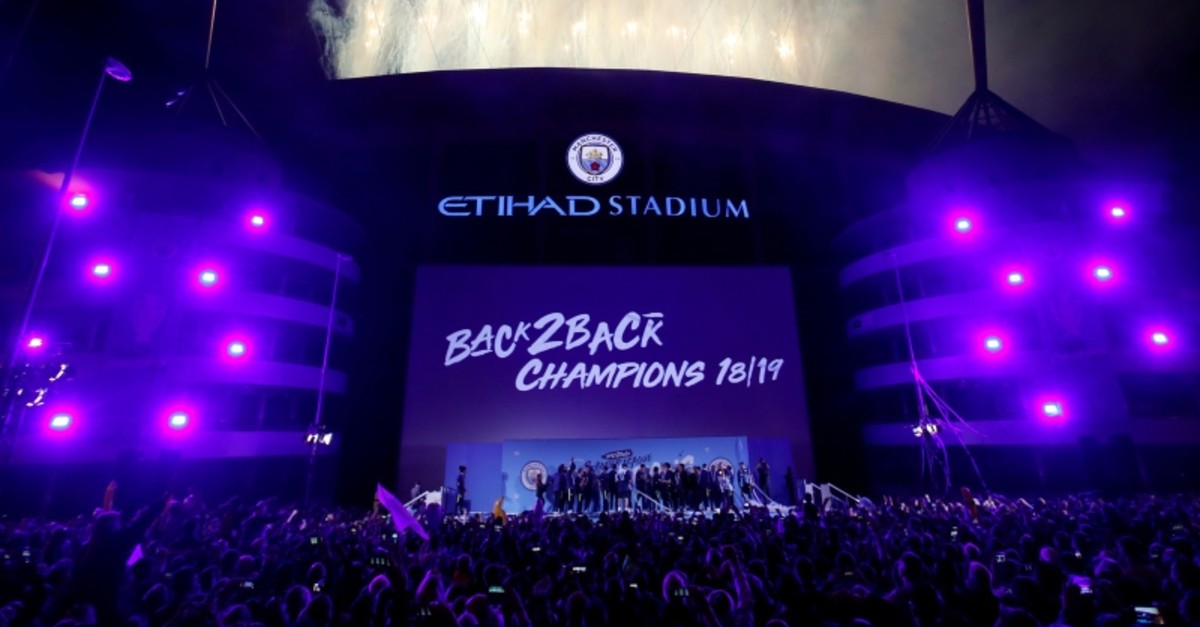 Manchester City fans and players celebrate the team's Premier League championship at the Etihad Stadium in Manchester, U.K., May 12, 2019. (Action Images via Reuters/Carl Recine)
by Compiled from Wire Services May 16, 2019 3:26 pm

Manchester City's possible one-year ban from the Champions League is in the hands of a panel of independent judges.

UEFA said Thursday its club finance investigators have sent the file on the Premier League champions to the judges, but the governing body did not publish the recommended punishment or a timetable for the verdict.

UEFA introduced the Financial Fair Play (FFP) rules to prevent clubs that qualify for its competitions from spending beyond their means and avert what then-president Michael Platini called "financial doping" within the game.

"The Club Financial Control Body (CFCB) chief investigator, after having consulted with the other members of the independent investigatory chamber of the CFCB, has decided to refer Manchester City FC to the CFCB adjudicatory chamber following the conclusion of his investigation," UEFA said in a statement on Friday.

"The CFCB investigatory chamber had opened an investigation into Manchester City FC on 7 March 2019 for potential breaches of Financial Fair Play (FFP) regulations that were made public in various media outlets."

City is suspected of breaking rules that monitor commercial income and spending on player transfers and wages. The most serious sanction, the ban from the Champions League, could apply next season.

The chief investigator in the case was Yves Leterme, a former prime minister of Belgium. The chief judge, Jose Narciso da Cunha Rodrigues of Portugal, also sits at the European Court of Justice in Luxembourg.

In 2014, the Premier League champions were fined £49 million ($63 million) and subjected to squad, wage and spending caps in a settlement agreed with football's European governing body following a previous breach of the rules.

The reports alleged that City, bankrolled by Sheikh Mansour, a member of Abu Dhabi's royal family, had set up sponsorship deals to circumvent regulations limiting how much money owners can put into a club.

City hit back Thursday at what it called "a wholly unsatisfactory, curtailed, and hostile process" overseen by UEFA.

"The accusation of financial irregularities remains entirely false and the ... referral ignores a comprehensive body of irrefutable evidence provided by Manchester City," the club said.

UEFA's club finance panel opened a formal case against City in March "for potential breaches of financial fair play regulations that were made public in various media outlets."

Internal documents about City's business and emails between club executives have been published in the Football Leaks series led by Der Spiegel. The revelations implied City officials deceived UEFA for several years, including by disguising that revenue from potentially overvalued commercial deals came from the club's owners in Abu Dhabi.

UEFA rules limiting cash injections from wealthy owners requires potentially overvalued sponsor deals linked to those owners to be made at a fair market rate.

The Football Leaks documents are suspected of being hacked or stolen, and a Portuguese man was extradited from Hungary to his home country in March to be questioned about attempted extortion and illegal access to data.

City has not disputed that the published information is authentic, while also refusing to address the detail in public statements.

The Associated Press reported this week that club officials have not fully cooperated with UEFA investigators.

"Manchester City is entirely confident of a positive outcome when the matter is considered by an independent judicial body," the club said in its most recent statement.

City can appeal against any punishment at the Court of Arbitration for Sport.

Any appeal process would face a tight schedule to be resolved by Aug. 29, the date of the Champions League draw. UEFA judges could also decide to apply sanctions in the 2020-21 season.

If Man City is removed from next season's Champions League, Arsenal could be the replacement club as the fifth-place Premier League team. However, Arsenal can qualify on its own by winning the Europa League final against Chelsea on May 29. That would lift sixth-place Manchester United into contention.

City was bought by Sheikh Mansour in 2008 and the club have since been transformed into serial winners after decades of under-achievement.

A win against Watford in Saturday's FA Cup final would secure the first domestic treble in English football history after the club, managed by Pep Guardiola, won the League Cup earlier this season and retained their Premier League title.

The Premier League said in March it was investigating financial matters and academy player recruitment at City.

But in March, the Court of Arbitration for Sport backed the French club against UEFA.

CAS upheld PSG's appeal against a decision by UEFA to reopen a probe into the club's compliance with FFP regulations.