Allegri, Juventus part ways after 5 years of dominance in Italy's Serie A 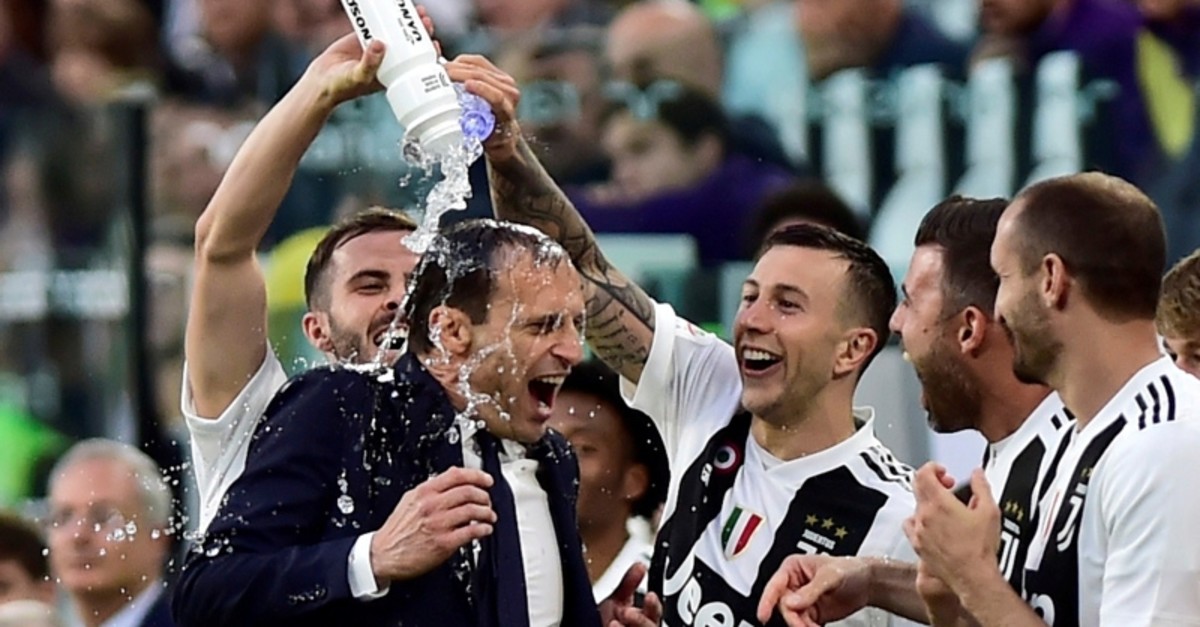 Juventus coach Massimiliano Allegri celebrates winning the league title after the match with Federico Bernardeschi and teammates after the Serie A against Fiorentina, at Allianz Stadium, Turin, Italy, April 20, 2019. (Reuters Photo)
by Compiled from Wire Services May 17, 2019 5:44 pm

Massimiliano Allegri will not coach Juventus next season, leading to speculation the Italian club champion is preparing to rehire former manager Antonio Conte.

Allegri "will not be on the Juventus bench" for 2019-20, the club said in a brief statement on Friday, adding Allegri and Juventus president Andrea Agnelli will hold a news conference on Saturday.

51-year-old Allegri's contract was due to expire at the end of next season and he indicated he would remain in place when Juventus clinched a record-extending eighth straight Serie A title last month.

Allegri has been in charge of Juventus for the last five seasons during which he won 11 trophies.

The Turin giants have already wrapped up their eighth consecutive title, and Allegri's fifth in as many years. He lifted the Coppa Italia on four occasions since replacing Antonio Conte in 2014.

He led the team to two Champions League finals - losing to Barcelona in 2015 before being hammered by Real Madrid two years later - but Juventus appears frustrated by not being able to win the European trophy since 1996 — especially after signing World Player of the Year Cristiano Ronaldo from Real Madrid before this season.

Juventus was humiliated by modest-spending Ajax in the last eight in April despite a star-studded side including Ronaldo, Argentina's Paulo Dybala and France World Cup winner Blaise Matuidi.

Conte led Juventus to the first three titles of the club's current run then left to coach Italy through the 2016 European Championship. He coached Chelsea to the English Premier League title in 2017 but was fired by the London club in 2018 and has been out of work ever since.

Conte said recently he wants to coach again next season but without specifying where.

The club's former midfielder Conte along with France boss and ex-defender and boss Didier Deschamps, Champions League finalist Mauricio Pochettino of Tottenham and Lazio's Simone Inzaghi have been linked with taking over from Allegri in the Italian press in recent weeks.

Allegri's name shot up the bookmaker's list of favourites to be the next permanent coach at Inter Milan and Chelsea despite both sides already having men in place. He was suggested as a possible replacement for German coach Thomas Tuchel at Paris Saint-Germain.

Wales midfielder Aaron Ramsey has already signed for the Italian club on a free transfer from Arsenal for next season.

Allegri had arrived at Juventus six months after being sacked by AC Milan, whom he had led to the Serie A title at the first attempt in 2011 after earning coaching plaudits at Cagliari.

He was initially greeted with hostility at Juventus; supporters hurled eggs at his car as he arrived for his first training session. But he quickly won the fans over as the club continued their dominance of Serie A.

Allegri's final two matches with Juventus will be against Atalanta on Sunday in Turin and at Sampdoria the following weekend.

The final home game will be an occasion to celebrate another Serie A title and will be one they will be determined to win.

Allegri's team have been held in their last two outings since sealing the Scudetto on April 20.

And they are up against an Atalanta side who are hurting after their Coppa Italia final defeat, and still pushing for a first-ever Champions League qualification.

Gian Piero Gasperini's men slumped to a 2-0 defeat to Lazio in Rome this week which ended their 12-match unbeaten run.

The club from Bergamo had eliminated holders Juventus in the quarter-finals, and were bidding for their first major honor since their Coppa triumph in 1963.

Portuguese star Ronaldo has two games left to try to finish top scorer in his first season in Serie A as he is five behind Sampdoria's Fabio Quagliarella.