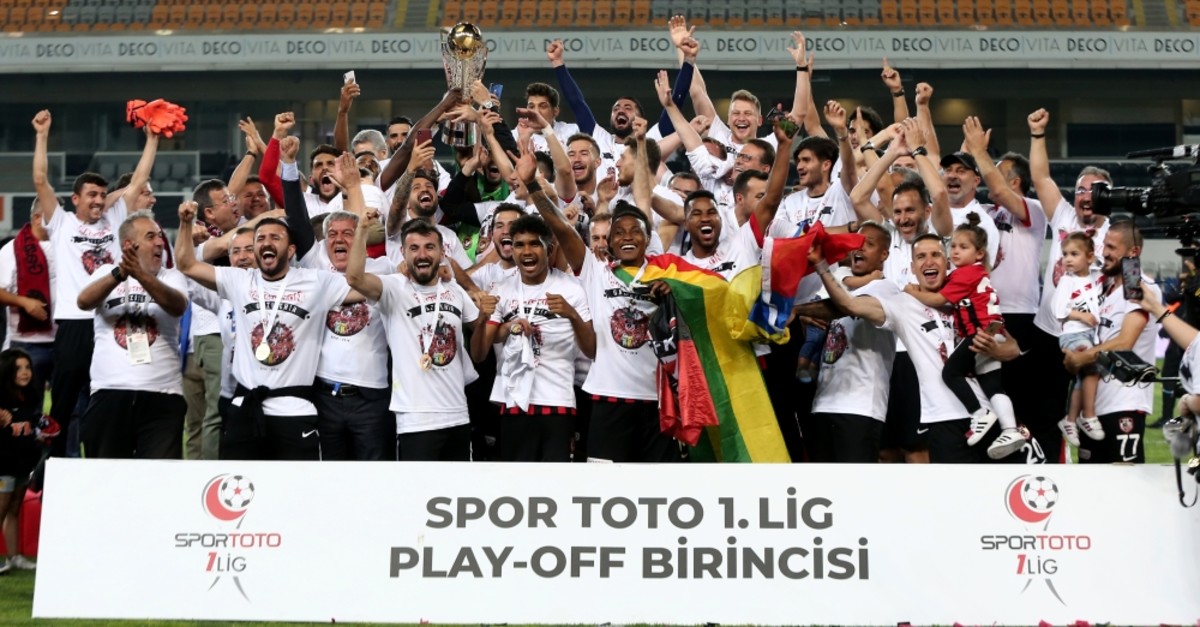 Penalty shots in the 1. Lig playoffs secured promotion to the Süper Lig for Gazişehir Gaziantep as it became the last team to reach the first division

"Look who is here" the song shared on Gazişehir Gaziantep's social media account says. The club itself was a bit surprised to reach the Süper Lig that came courtesy of a penalty shootout in the 1. Lig playoff final against Hatayspor. Anyway, the team is here, ready to compete with giants of Turkish football in the top-tier league.

Based in Gaziantep, a commercial hub on Turkey's south that borders with Syria, the team was promoted to Süper Lig for the first time since its foundation in 1988. In Thursday evening's playoff final at Istanbul's Fatih Terim Başakşehir Stadium, Gaziantep defeated Hatayspor 5-3 on penalties.

The team managed to take the lead at the end of the first half. But, Hatayspor equalized in the 82nd minute. No side could have the upper hand in the extra time, so the promotion was down to penalties.

Gaziantep has been in the playoffs for four times and even played the final in the 2010/2011 season, but only to lose each time. It now joins Gençlerbirliği and Abalı Denizlispor as the newcomers to next season's Süper Lig. It will be the second team to represent the city of Gaziantep after Gaziantepspor.

Gaziantepspor, older than Gazişehir, was better known of the two and a formidable rival for top teams like Galatasaray and Beşiktaş for a long time in Süper Lig before it fell on hard times and got relegated to 2. Lig in the 2016-2017 season. It was shut down entirely in January.

Like Gaziantepspor, Gazişehir Gaziantep has black and red in its colors but it apparently has a more promising future if it can keep its lineup and coach Mehmet Altıparmak. Altıparmak is already credited with Süper Lig promotion of Büyükşehir Belediye Erzurumspor last season. Previously, he was behind the promotions of Alanyaspor and Kartalspor to 1. Lig.

The team, originally conceived as Sankospor, named after a prominent business dynasty based in Gaziantep, owes much to that dynasty, Konukoğlus.

Adil Sani Konukoğlu, deputy CEO of SANKO Holding serves as the club's president, taking over from another member of the family.

Gaziantep was endorsed by the municipality for a while and bore the title of Gaziantep Büyükşehir Belediyespor before it changed its name and severed ties with the municipality in 2017 after a streak of failures that stalled its bid for Süper Lig. Under Adil Sani Konukoğlu, the team was reshuffled and managed to reach playoffs twice in the two consecutive seasons.

Speaking after the win against Hatayspor, Mehmet Altıparmak said they were off to a poor start to the second half of the season and there has been "an adaptation process for new players." "We had to gain momentum by the end of the season and we did it, we truly gained an amazing momentum," Altıparmak says. "Every player, those on the pitch and on the bench did something for the team and it was this team spirit, this family spirit that brought us victory," he said. Altıparmak largely changed the lineup this season by sacking eight players and hiring seven new ones. A change of strategy and having players he worked with in the past helped them, Altıparmak says.

Ahmet Kesim, who scored the winning goal from the spot against Hatayspor, says the team put on "a perfect display of struggle" against Hatayspor, one of the best teams of 1. Lig. "Both teams were here because they well-deserved it. I am glad that I was blessed with scoring the last goal," Kesim told reporters after the match. "It is weird to get to Süper Lig under Altıparmak," Kesim said, pointing out to coach's last tenure as coach of Erzurumspor, which had snatched the Süper Lig spot from Gazişehir Gaziantep last season.