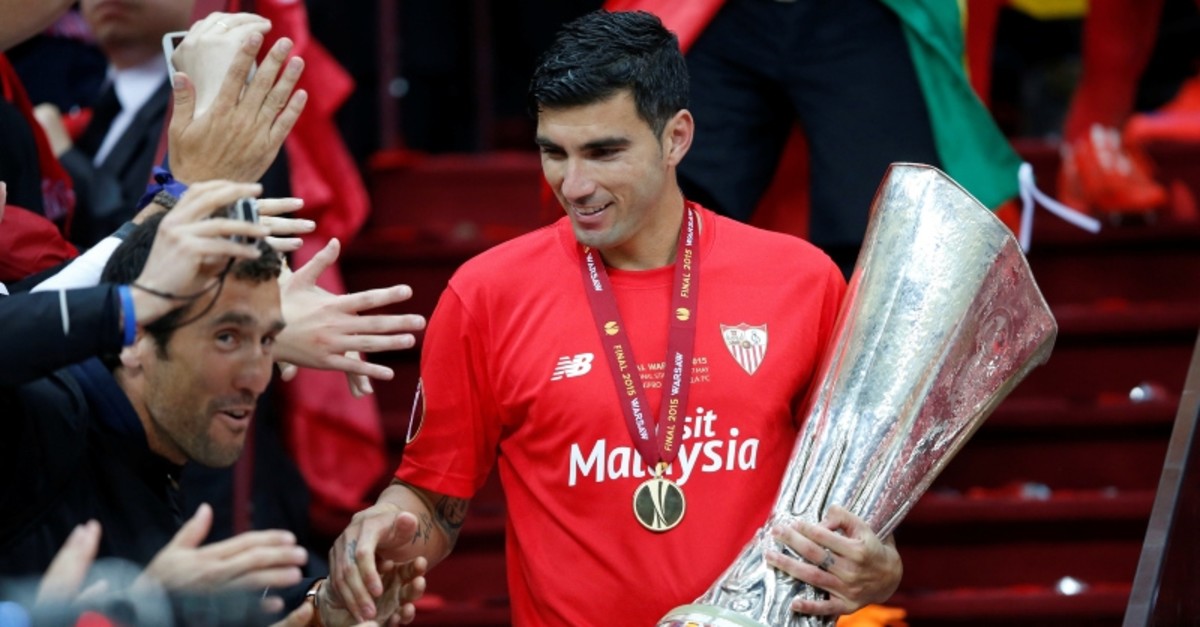 This file photo shows Sevilla's Jose Antonio Reyes celebrating with the trophy and fans after winning the UEFA Europa League Final against Dnipro Dnipropetrovsk at the National Stadium in Warsaw, Poland, May 27, 2015. (Reuters Photo)
by Compiled from Wire Services
Jun 01, 2019 6:23 pm

José Antonio Reyes, the former Spain midfielder who won five Europa League titles and was part of Arsenal's unbeaten "Invincibles" squad, has been killed in a traffic accident at the age of 35.

La Liga's Sevilla and second-division club Extremadura, where Reyes played this past season, both confirmed the death on Saturday.

He helped Sevilla win the Spanish second division in his first stint at the club. He won the Europa League five times, twice with Atletico Madrid and three times in his second spell at Sevilla.

Reyes also played for Real Madrid and Atletico Madrid among other clubs in a professional career that spanned nearly 20 years, after making his debut for Sevilla as a 16-year-old.

Reyes made 21 appearances for Spain between 2003-06, scoring four goals.

Former Arsenal manager Arsene Wenger signed Reyes on the back of Spain's Under-19's European championships win where he played alongside Fernando Torres and Andres Iniesta, and a dazzling series of matches with Sevilla the following season.

"I am devastated to hear the terrible news about Jose," Wenger said in a statement. "To his family and friends, all support from everyone in the Arsenal family. He will remain forever in our hearts."

Arsenal said it would fly the club flag at half mast at its training ground on Saturday.

Real Madrid captain Sergio Ramos, who like Reyes came up through the youth ranks at Sevilla and played alongside him for Spain and Madrid, also expressed his sadness.

"Broken. Shattered. I have no words," Ramos wrote in Spanish on Twitter. "All the love to the family. We'll always remember you, friend! RIP brother."

A minute's silence will be held for Reyes before Saturday's Champions League final in Madrid between Liverpool and Tottenham.

"We are extremely saddened to hear the tragic passing of José Antonio Reyes," Galatasaray said in a post.

Fenerbahçe also extended condolences, saying: "Our thoughts are with the family and friends of José Antonio Reyes as well as Extremadura UD at this incredibly difficult time."

Another Turkish football club Alanyaspor, which lost their Czech striker Josef Sural in a road accident in late April, also expressed grief over death of the Spanish footballer.

The Spanish Football Federation (RFEF) also confirmed there would be a minute's silence held before all official Spanish league games this weekend. But the RFEF said the seven Segunda Division games would be postponed, including Cadiz against Extremadura, the club Reyes had joined in January.

The emergency services in Andalusia and the authorities in the town where his family live, Utrera, said Reyes died in an accident on the main road from Sevilla to Utrera. They said another member of his family also died and a third person was injured. Utrera declared two days of mourning.

After leaving Sevilla in 2016, Reyes played for Espanyol, Cordoba and Xinjiang Tianshan in China, before arriving at Extremadura this year as a free agent.

"With broken hearts we announce the news of our player Jose Antonio Reyes' death in a car crash and we ask for you to pray for his soul," Extremadura said.

Monchi, who overlapped with Reyes as a player at Sevilla and is now the club's director of football, also tweeted his sadness and referred to wingback Antonio Puerta, who died of a cardiac arrest playing for Sevilla in 2007.

"Impossible news to believe, impossible to digest, how sad my God," wrote Monchi. "What a left flank you are going to make, Antonio and you, up there."

According to the German football database website Transfermarkt, Reyes scored 96 goals and 118 assists in a total of 641 games during his career.

Reyes and his wife Noelia Lopez would have been married two years this month.

Their daughters Noelia and Triana are five and two. He also has a son Jose Antonio from a previous marriage.