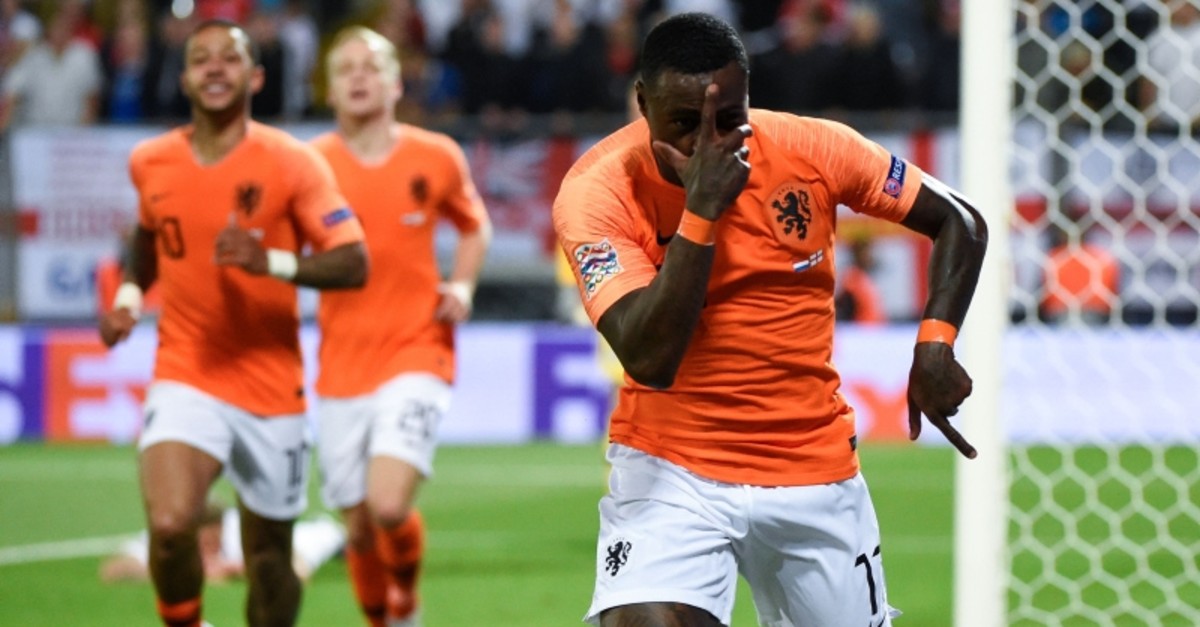 Netherlands' forward Quincy Promes celebrates his team's second goal during the UEFA Nations League semi-final football match between The Netherlands and England at the Afonso Henriques Stadium in Guimaraes on June 6, 2019. (AFP Photo)
by Compiled from Wire Services
Jun 07, 2019 12:28 pm

Another semifinal loss, another missed chance for England to end its title drought.

The Netherlands took advantage of two sloppy defensive mistakes by England in extra time to earn a 3-1 win in the semifinals of the Nations League on Thursday, extending England's run of more than five decades without a trophy.

An own goal by Kyle Walker gave the Dutch the lead after John Stones gave the ball away in the first half of extra time, and Ross Barkley then misplayed a back pass to gift the Netherlands a third goal in the 114th minute.

"Throughout the game we made too many mistakes in our third of the pitch," England coach Gareth Southgate said. "Partly that was a consequence of their pressure but partly that was errors by us. The last two goals were really difficult errors to account for."

The Dutch will play the final of UEFA's newest competition against host Portugal in Porto on Sunday, when it will try to lift its first trophy since the 1988 European Championship.

The Netherlands had failed to qualify for both the 2016 European Championship and the 2018 World Cup.

England, which was seeking its first title since the 1966 World Cup, will play Switzerland in the third-place game in Guimaraes, also on Sunday.

England hasn't celebrated a title since that World Cup at home, and it has lost the last four competitive semifinals it played in, including in the World Cup last year, at the 1996 European Championship and in the 1990 World Cup.

Southgate's men were attempting to build on the success of reaching a first World Cup semi-final for 28 years, but England were largely outplayed to show much work is still to be done if they are to end their trophy drought on home soil next summer at Euro 2020.

"It was tough to take in the end because you get to another semifinal and it should be a positive, and of course you leave even more deflated," Southgate said. "But I have to look at the bigger picture and what these players have given me."

Manchester City's Raheem Sterling took the armband in honour of his 50th cap but was anonymous.

"Towards the end of the second half I thought we were the better team," he said. "But if you make silly mistakes at this level you get punished for it."

England arrived for the Nations League as one of the favorites after a fourth-place finish at the World Cup and a series of good results since then, including wins over Spain and World Cup runner-up Croatia.

The Netherlands, failing to even qualify for the last two major tournaments, made it to the Final Four by eliminating the last two World Cup winners — France and Germany.

However, the young talent that has seen a dramatic turnaround in their fortunes on the international stage was in evidence with Barcelona-bound Frenkie de Jong outstanding in midfield.

"One of our big plus points is that we keep going," said man of the match de Jong. "We all run for each other and never give up. It's not the first time we've come from behind."

"(This win) is a sign we're growing stronger and stronger," said coach Ronald Koeman, who was still playing when the Dutch won the Euros in 1988. "This win will help us improve even more. We don't stop after tonight."

"It certainly was a war of attrition," he said. "We think we can win the prize."

The Three Lions took the lead in the first half through a penalty by Marcus Rashford after he was brought down by center back Matthijs de Ligt, but the Dutch defender made amends by heading in the equalizer in the 73rd.

De Ligt also looks set to leave Ajax with a host of top European clubs after his signature, but he had a moment to forget just after the half hour mark. The 19-year-old failed to control a simple pass and then chopped down Rashford in his attempt to recover.

Rashford took responsibility from the spot to send Jasper Cillessen the wrong way for a barely deserved lead.

Denzel Dumfries had to make a cleaner last-ditch tackle on Rashford moments later to avoid conceding a second penalty.

Rashford suffered an ankle injury in that challenge that forced him off at half-time as Tottenham's Harry Kane was restored for the second period.

England thought it had scored a winner in the 83rd but a video review determined that Jesse Lingard was just offside before he scored from inside the area.

The Netherlands went ahead in the seventh minute of extra time after Stones gave the ball away to Memphis Depay inside his own area. The Dutch forward's shot was stopped by a great save by goalkeeper Jordan Pickford, but on the rebound Quincy Promes got to the ball first and his strike deflected off Walker and into the net.

Promes added the third goal after another defensive blunder by England, this time by Barkley, whose short pass went straight to an opponent inside the area.

However, the introduction off the bench of Promes and Donny van de Beek offered the Netherlands more dynamism and England were eventually punished for sitting deep when De Ligt made amends by powering home from a corner.

Van de Beek then missed a glorious chance to completely turn the game around.

Southgate didn't start any of the players who last week were in the Champions League final in Madrid, including Liverpool's Jordan Henderson and Kane.

Kane entered the match at halftime to replace Rashford, who hobbled after getting injured near the end of the first half.

UEFA created the Nations League this season to give national teams more meaningful games and reduce the number of friendlies. Despite some criticism at first, especially by the clubs, the competition produced some exciting games and gave more nations the chance of playing in competitive environments.

Meanwhile, Portugal defender Pepe will miss the Nations League final because of a shoulder injury.

The Portuguese soccer federation says Pepe will not play Sunday's final against the Netherlands after tests showed he fractured his right shoulder in the semifinal against Switzerland on Wednesday.

Pepe had to be substituted about 15 minutes into the second half of Portugal's 3-1 win at the Estadio do Dragao in Porto.

For the final, Portugal coach Fernando Santos is expected to replace the 36-year-old veteran central defender with either Ruben Dias or Jose Fonte.