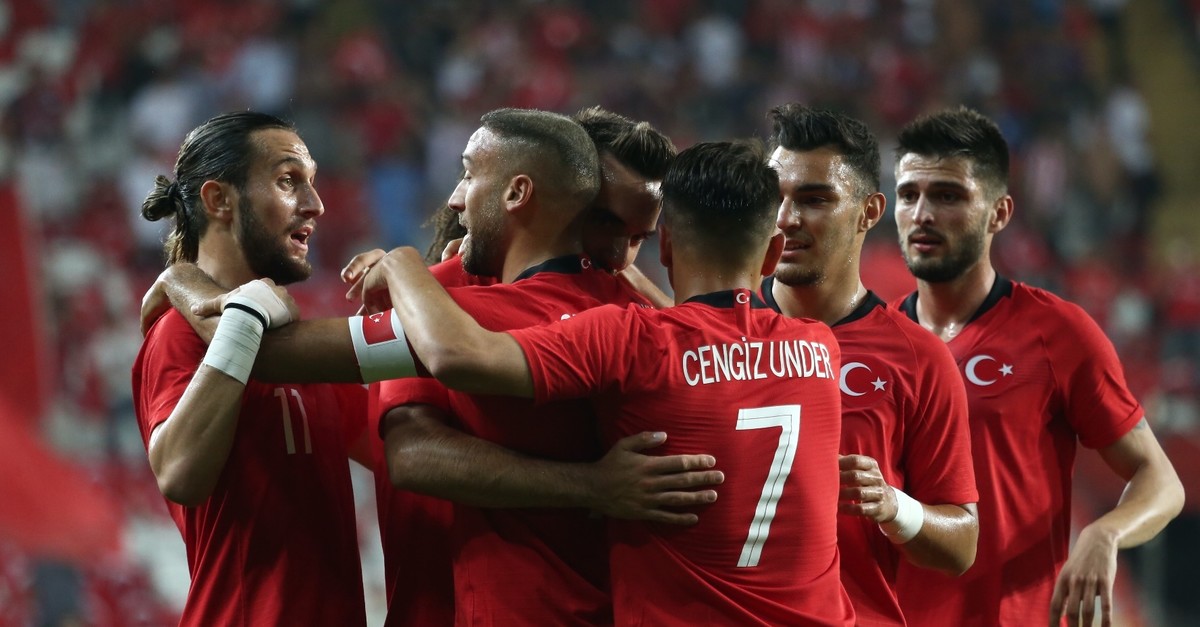 Turkey's new coach Şenol Güneş faces his first genuine challenge as the national team goes head-to-head against France in a Euro 2020 qualifier on Saturday. In Week 3 of the qualifiers, teams in five groups will compete for the top spot in their groups. Turkey will take on its third challenge after relatively easy victories over Albania and Moldova in the first two matches. Güneş, formerly of Süper Lig powerhouse Beşiktaş, navigated a renewed lineup through both victories after taking over from Romania's Mircea Lucescu. The veteran coach had described the match against France as the "beginning of the real battle" in a recent press conference while expressing his frustration over the team's performance in friendlies.

Star-studded France and the reshuffled Turkish national team, where Güneş mixed young talents with veterans, previously cut from the starting eleven, share six points in their group. So, it will be a match to watch when they meet in the central Turkish city of Konya. Teams in the first two spots in their groups automatically qualify for the finals. The Turkish team has long been far from its former self since finishing third in the 2002 World Cup, an unprecedented accomplishment for Turkey. It was Güneş at the helm then and he replaced Lucescu as the Romanian coach failed to meet expectations to return the team to its former status in international football.

Victories against Albania and Moldova reignited hopes for a better Turkish team this year. Güneş, however, is cautiously optimistic and offers a gloomy outlook for the team as his remarks after a 2-0 win against Uzbekistan in a friendly earlier this month indicates. "It was a good fight so far, and we were comfortable. Hell awaits us now. The real battle is on," Güneş said at a press conference following the victory against Uzbekistan. "The tempo I've seen here today was not good for a match against France. Players are aware of it, I am aware of it. We will have a different style [against France], but we need to be really good both in attack and defense," Güneş said. "All the players are good but they have to prove themselves again and again. It is not enough to have a dream team," Güneş said. The coach is confident of the team's morale but says he doesn't know yet how far they can go physically. "We have good things going for us now, but it is not enough to beat France, at least for now," Güneş said a few weeks ago.

Yusuf Yazıcı and Çağlar Söyüncü paint a more optimistic outlook. "Of course it will be a difficult match, but I say why not? Why shouldn't we win against France?" Trabzonspor's 22-year-old midfielder Yazıcı said.

"They have a strong team, but we are going through some very good training. We won two friendlies, and they were good for boosting our self-confidence. I think it will be a good game against France too," Yazıcı said at a joint press conference with Söyüncü on Wednesday in Antalya where the team is attending a training camp.

Leicester City's Söyüncü acknowledges that France is a challenge but says Turkey would rely on team spirit. "It is different than playing for the Premier League or any other league. You don't have time to train together, to spend time together and it matters to keep your unity. I don't know what the atmosphere is like in the French camp, but we will take every measure [to stick to team play]," Söyüncü said.

"France is the current world champion, but when you keep your concentration to score, you can do better than them," he said.

Belözoğlu to mark the 100th game

If Güneş gives the green light, tomorrow's match will be something special for Medipol Başakşehir's midfielder Emre Belözoğlu. The 38-year-old will mark his 100th cap for the national team against France, a very likely addition as he was recalled to the national team by Güneş after a break of more than a year.

Belözoğlu was a promising 19-year-old talent for Galatasaray when he joined the national team in a friendly against Norway in February 2000. He has since the national colors 99 times, while his career took him to Fenerbahçe and Atletico Madrid and finally to Süper Lig runner-up Medipol Başakşehir.

Against France, he has the chance of becoming only fifth Turkish player to earn 100 caps. Belözoğlu, who is set to leave Başakşehir soon, scored nine goals in 99 games. In the current national fold, he is followed by Burak Yılmaz with 55 matches to his name.

France is still the clear favorite for bookmakers with a lineup of clear likes of Kylian Mbappe, Olivier Giroud and Antoine Griezmann. Mbappe suffered a slight injury in a friendly, but Didier Deschamps may still include him in the starting eleven.