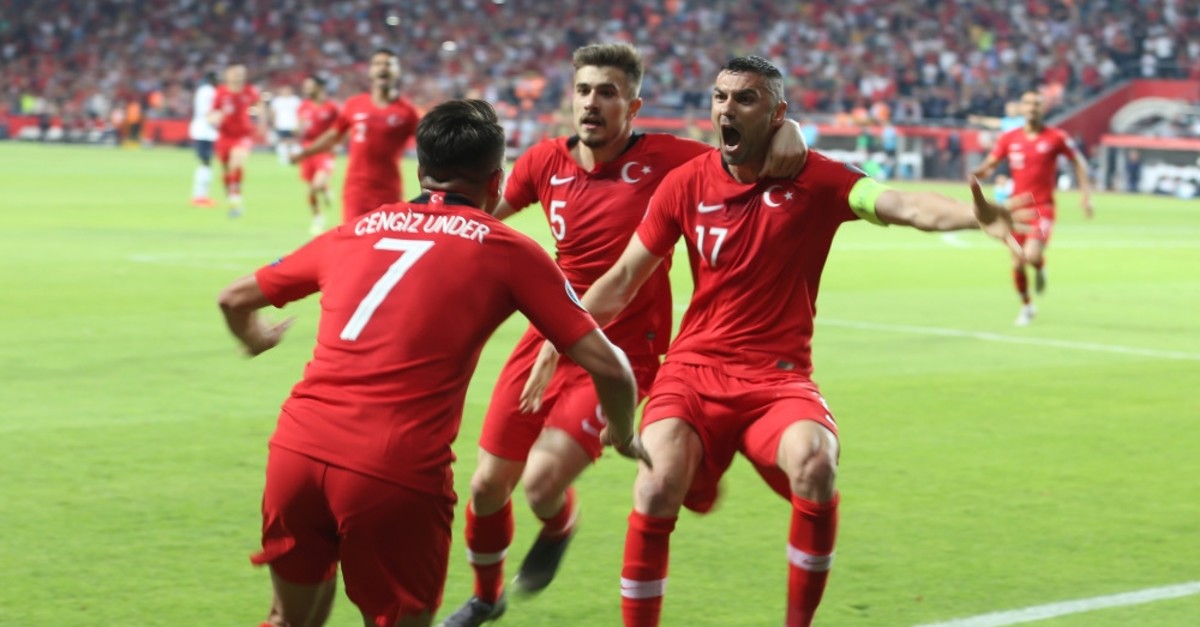 He was already focused on next game against Iceland and was as calm as usual in a post-match press conference. That man, Şenol Güneş, is currently most celebrated figure in Turkey. The national team coach has orchestrated a spectacular streak of five wins since he took the helm a few months ago.

A 2-0 victory against reigning world champion France on Saturday stunned a nation hungry for international success and surprised many not expecting a loss for the star-studded French team.

The latest victory in the Euro 2020 Group H qualifiers put Turkey at the top in its group, ahead of tomorrow's away game in Iceland. France will square off against Andorra, seeking to close the three-point gap with group leader Turkey.

Since he left the Süper Lig side Beşiktaş for the national team, Güneş has led the team to victory against Albania, Moldova, Greece, Uzbekistan and lastly, France. The team conceded only one goal since the start of Güneş' tenure in February and scored 12. Kaan Ayhan scored Turkey's first goal in the 30th minute and his header was followed by Cengiz Ünder in the 40th minute.

"That was a slap in the face for us and there's not a lot I can say," France's coach Didier Deschamps told TF1. "We didn't put in the match we needed to against a team that played their game. That's top-level football and it's the same whether you are world champions or not."

"We played confident, enthusiastic and smart," Şenol Güneş said after the match in the central city of Konya. "France had effective weapons but apparently, we were more effective. We already had supremacy and conceded less opportunity to score [for France]," Güneş said. "France is a great team, a team with stellar players. But our true rival is Iceland. I believe France will rise from the group anyway. We have to cut celebrations short and concentrate on the Iceland match," Güneş added.

Aside from Kaan Ayhan and Cengiz Ünder, the highlights of Saturday's game came from two players from Güneş' former team Beşiktaş. Forward Burak Yılmaz and defender Dorukhan Toköz gave France a hard time. Yılmaz, who returned to the national team after a one-and-a-half-year break, put on an impressive performance against France. Samuel Umtiti and Raphael Varane were barely able to tackle Yılmaz in his multiple attempts to break into the French defense.

Back on the Turkish side, Dorukhan Toköz quashed Paul Pogba's attacks in an amazing display of defense against the Manchester United star. Elsewhere, Kaan Ayhan and Merih Demiral proved to a formidable duo against the likes of Olivier Giroud, Antoine Griezmann, Kylian Mbappe and Kingsley Coman, thwarting their every attempt to get closer to the Turkish defense. Demiral, who is rumored to be in Juventus' sights, assisted Ayhan's goal.

Mert Günok was another star of Turkish team, shutting down multiple French attempts to score. The skilled goalkeeper now has a streak of three Euro 2020 qualifiers without conceding a goal. The 30-y

ear-old player of Medipol Başakşehir conceded only 22 goals in 34 matches in the Süper Lig and remains a key player for the national team with his effective passes.