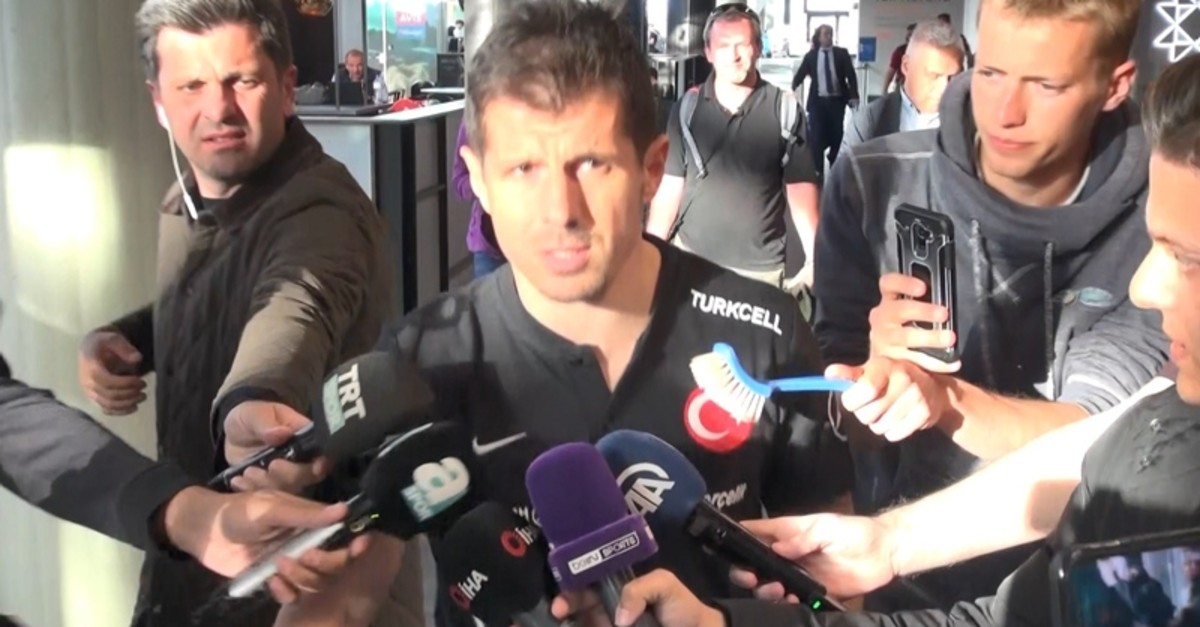 Several Turkish officials lashed out at Iceland on Monday after the Turkish national football team was subjected to what they called "insulting" treatment, making the players go through scrutinous security searches and holding them up at the Keflavik Airport for hours.

The Turkish team traveled to Iceland after a shock 2-0 victory over world champions France in the UEFA Euro 2020 qualification on Saturday. They arrived late Sunday for their Group H match against Iceland to be played on Tuesday.

According to Turkish forward Burak Yılmaz, Icelander authorities made the team wait more than three hours at passport control and subjected them to strict security checks, repeatedly searching the players' belongings thoroughly.

Meanwhile, an unidentified man held up what appeared to be a toilet brush to Turkey's midfielder Emre Belözoğlu, imitating reporters talking to players.

Turkish social media users joined in the criticism and demanded Iceland identify the man, responding with indignation, and graphics showing the Icelandic flag with a brush taking the place of the vertical bar of its red cross. The hashtag #TurksAreComingForIceland trended on Twitter in Turkey. Famous Turkish artists also rallied on social media to support the national team.

Belözoğlu said they were subjected to an unnecessarily thorough search, adding that he hoped authorities would explain the reasoning behind the ordeal.

The national team, after a long wait, went to the hotel in capital Reykjavik by bus. Team Manager Şenol Güneş is expected to hold a news conference ahead of the training to be held at Laugardalsvollur stadium later on Monday.

President Recep Tayyip Erdoğan made a phone call to the head of the Turkish Football Federation (TFF) Nihat Özdemir, requesting him to convey a message of solidarity to the national team and its coach, Şenol Güneş. According to a TFF statement, Erdoğan also told Özdemir that Turkish authorities took all the necessary actions in the case.

"No one should doubt that we will do what is necessary," Çavuşoğlu said.

The minister said he will call his Icelandic counterpart Gudlaugur Thor Thordarson over the unacceptable treatment of Turkish national team.

The Turkish Foreign Ministry also issued a diplomatic note to Iceland condemning the incident through Turkey's embassy in Oslo. Turkey's ambassador to Norway, Fazlı Çorman, has left for Iceland to express his country's discomfort over the developments.

There was no immediate comment from Iceland's government or foreign ministry.

Iceland football federation said they will issue a statement over the treatment the Turkish national team received, calling the whole affair "strange." Later, Omar Smarason, head of media and marketing at the Football Association of Iceland, said all passengers from "non-certified" airports received similar checks. Iceland's players went through the same procedure when they arrived home from Turkey's Konya airport five years ago, he added.

Sports and Youth Minister Mehmet Muharrem Kasapoğlu said in a statement released by the ministry that he decided to travel to Iceland to support the team. "Our players are not alone. As the Republic of Turkey, we will stand by them in the strongest way (in Iceland)," he stated.

Presidency Communications Director Fahrettin Altun said the incident was not in line with diplomatic courtesy and condemned the officials responsible for the ordeal.

"The treatment of the Turkish National Football Team at Iceland's Keflavik Airport was not in line with diplomatic courtesy or sportsmanlike conduct. I condemn the authorities and officials who were responsible for what happened. We will continue to monitor the situation," Altun said.

"We condemn Icelandic authorities in the strongest way possible. All necessary response will clearly be given to this disrespectfulness, which did not suit to the spirit of sports," Çelik said.

Terming the behavior as a kind of "violence", Çelik held Icelandic authorities responsible for the treatment.

"Icelandic authorities should apologize for this "primitive" practice and should take steps, which will repair this mistake," he added.