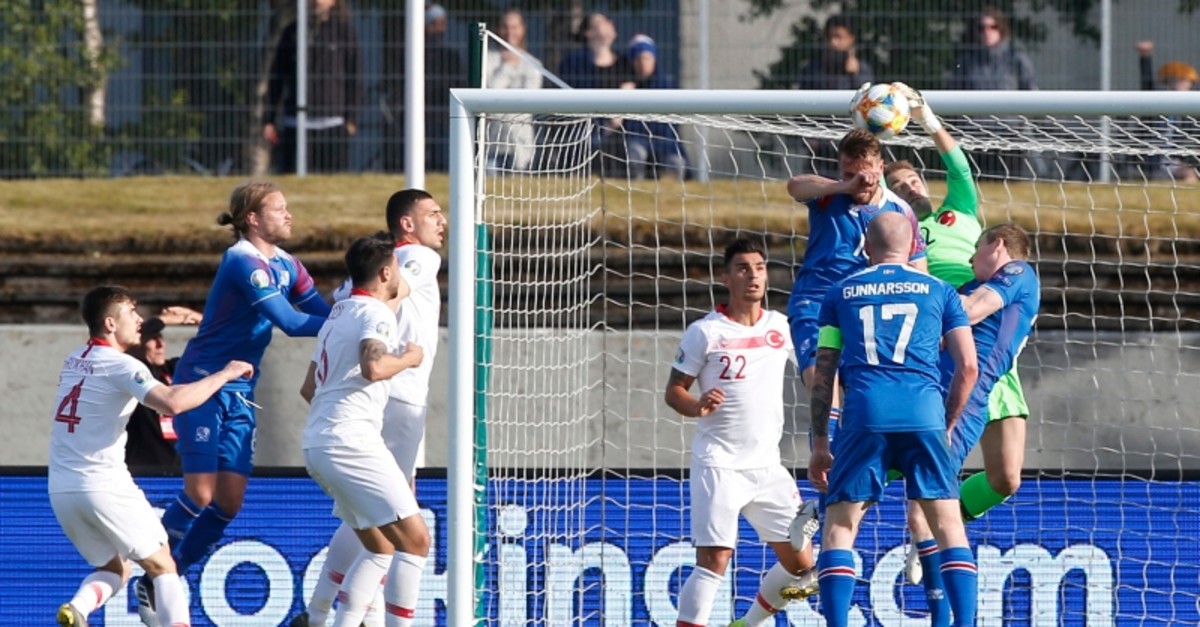 A 2-1 loss against Iceland in the Euro 2020 qualifiers ended Turkey’s winning streak in the tournament, although the team – which maintains a point tie in its group – is optimistic with regard to the four remaining matches

The Turkish national football team, though unfazed by the scandalous treatment at the airport, put on a lackluster performance against host Iceland in the Euro 2020 qualifiers, losing 2-1 Tuesday.

In the latest Group H game, Iceland defeated Turkey at home in Rejkjavik's Laugardalsvöllur Stadium. The home team scored the opening goal in the 21st minute when Johann Gudmundsson's curved free-kick towards Turkey's back met with Ragnar Sigurdsson, who had the finishing header to lead Iceland 1-0 against Turkey. Sigurdsson increased Iceland's lead to 2-0 in the 32nd minute with another header, this time a tap-in.

Turkey replied with a header of its own in the 40th minute, this time Dorukhan Toköz scored to bring Turkey back into the contest.

It was Turkey's first loss in the group after three wins in a row. Turkey has nine points in four matches in Group H.

On Saturday, Turkey defeated the defending world champions France for the first time in its history 2-0 to lead Group H.

In its other group matches so far, Turkey defeated Albania 2-0 and beat Moldova 4-0. The team currently shares nine points with France, which leads the group after a 4-0 win away to minnows Andorra to return to the top of Group H on goal difference. Kylian Mbappe, Wissam Ben Yedder, Florian Thauvin and Kurt Zouma scored France's goals.

Turkey will take on Andorra and Moldova, two relatively weaker rivals, before a second match against France on Oct. 14. A match against Iceland in November will be a determining figure in Turkey's qualifiers race.

The Turkish national football team arrived in Keflavík International Airport on Sunday night. Icelandic officials kept the footballers in the airport for about two hours at passport control and rigorously searched their personal belongings. Turkey issued a diplomatic note for Iceland to condemn the mistreatment of Turkish footballers at the airport.

Speaking at a post-match press meeting, Turkey's coach Şenol Güneş said they were "saddened" but would continue pursuing their Euro 2020 goal. Güneş downplayed the impact of mistreatment at the airport on the team's morale. "We came here tired but hopeful. The team was a bit anxious in the first 30 minutes, and I believe they played fine for the rest of the match," he said. Güneş said France was still the "favorite" in the group, and it would be better if they won against Iceland instead of France.

Güneş said the team "lost tempo" towards the end of the match. "We lost some opportunities to score. The team failed to tackle stray balls. Iceland had the advantage of a taller team and a better defense. They were effective in the midfield and good at passing time," he said.

Güneş also lamented his team's failure to tackle "balls bouncing from rival players." He admitted that the team also failed in tackling long passes by Iceland.

Following the match, the Football Association of Iceland thanked Turkish team "for a good game played in good competitive spirit."

"It is our sincere hope that we continue the mutual respect for each other on and off the field. Have a safe journey home and a great summer," the association said on Twitter.

Turkish officials and politicians, including President Recep Tayyip Erdoğan, expressed their disapproval at the disrespectful treatment of the national team players. The Turkish Foreign Ministry also issued a diplomatic note to Iceland condemning the incident through Turkey's embassy in Oslo.

Icelandic authorities said Monday that Turkish authorities informed Icelandic counterparts just hours before the arrival and the Turkish national football team and staff had passed through security and border patrol one hour and 21 minutes after their plane landed at the airport, despite the claims of Turkish footballers.

"Unfortunately, an official request for a fast track security check from the Turkish Embassy in Oslo was not received in time to be processed, as it was sent on only hours prior to the team's arrival in Keflavik. In any case, such privileges are usually only accorded to senior government officials," Icelandic authorities said.