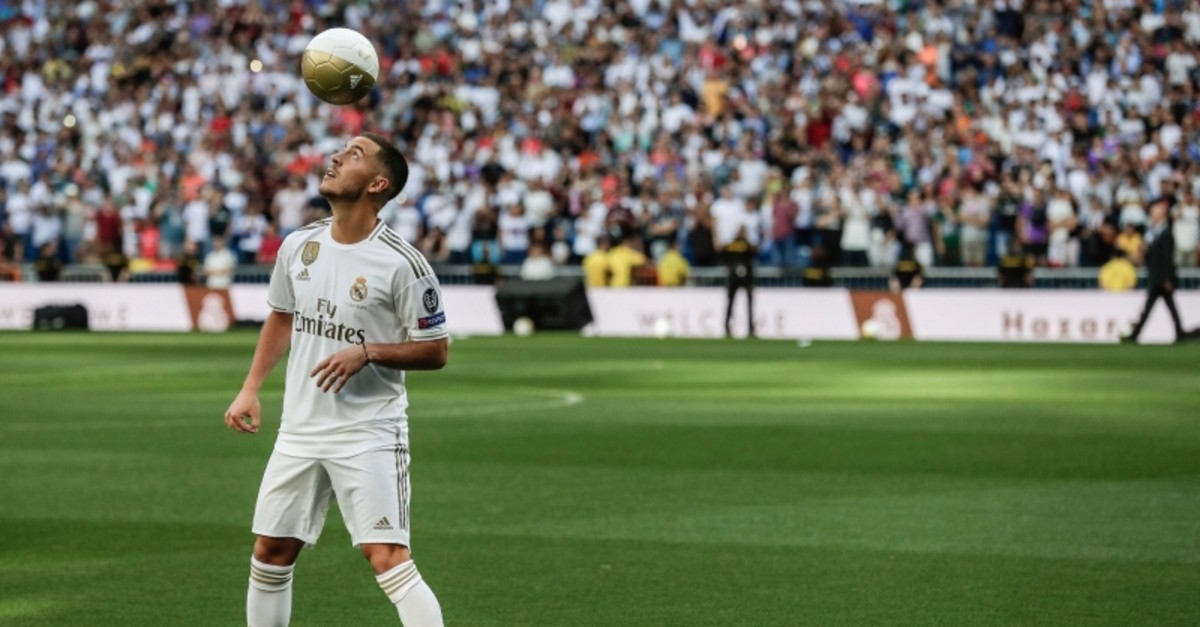 Eden Hazard donned Real Madrid's all-white kit for the first time Thursday as the Belgium forward was presented to tens of thousands of fans at the Santiago Bernabeu stadium following his club record transfer from Chelsea.

"I have dreamt of this moment since I was very young, since I was playing in my family's garden," Hazard said after passing a medical exam and signing a five-year contract with club president Florentino Pérez. "I became a Real Madrid supporter then. Later I went to France and England, but to arrive here now and wear this shirt is an honor. I can't wait for the season to begin."

Hazard said that he also had wanted to play for Zinedine Zidane.

"Everyone knows that Zidane was my idol when I was very young and the fact that he is Madrid's manager was an important factor," he said.

After changing his gray suit and tie for Madrid's shirt and shorts, Hazard kicked several balls to spectators packing the stands.

Madrid announced last week that it had acquired the 28-year-old playmaker from Chelsea for a reported fee of around 100 million euros ($113 million) plus add-ons, making him the club's most expensive signing ever.

The full amount would trump the 101 million euros Madrid paid Tottenham for Gareth Bale and the 91 million euros they spent to sign Cristiano Ronaldo from Manchester United.

Ronaldo attracted almost 80,000 for his presentation in 2009 and while the attendance for Hazard was not as large, this was still an impressive turnout.

Even three hours before, long queues snaked around the stadium while some supporters were seen running towards entrances they heard had suddenly been opened.

Inside, they roared as Hazard's best goals were shown on a big screen and then again when he struck a penalty into an open net.

Hazard juggled with one ball in front of the cameras and then booted dozens of them into the stands, waving and applauding as he walked around the edge of the pitch.

Hazard will be tasked with becoming the leader of the 13-time European Cup winner since the exit of Cristiano Ronaldo last summer. Without Ronaldo, Zidane's side failed to compete for any major title.

Madrid hopes that Hazard can provide the missing link between midfielder Luka Modric and striker Karim Benzema to produce the goals that dried up following the exit of Ronaldo.

Pérez, who had not made a major signing in several years, has spent big in recent weeks to revamp his squad.

Besides Hazard, the club has spent at least another 100 million euros on forward Luka Jovic and left back Ferland Mendy. It also plans to incorporate defender Eder Militao and forward Rodrygo, signed during the last two seasons.

But Hazard is the key piece to Zidane's plans to return Madrid to the top.

"I think I am at the best moment of my career," Hazard said. "I have had the dream of playing for Real Madrid for many years, but my career has gone through stages. I thought that now was the moment to mark a turning point and come to the biggest club in the world."