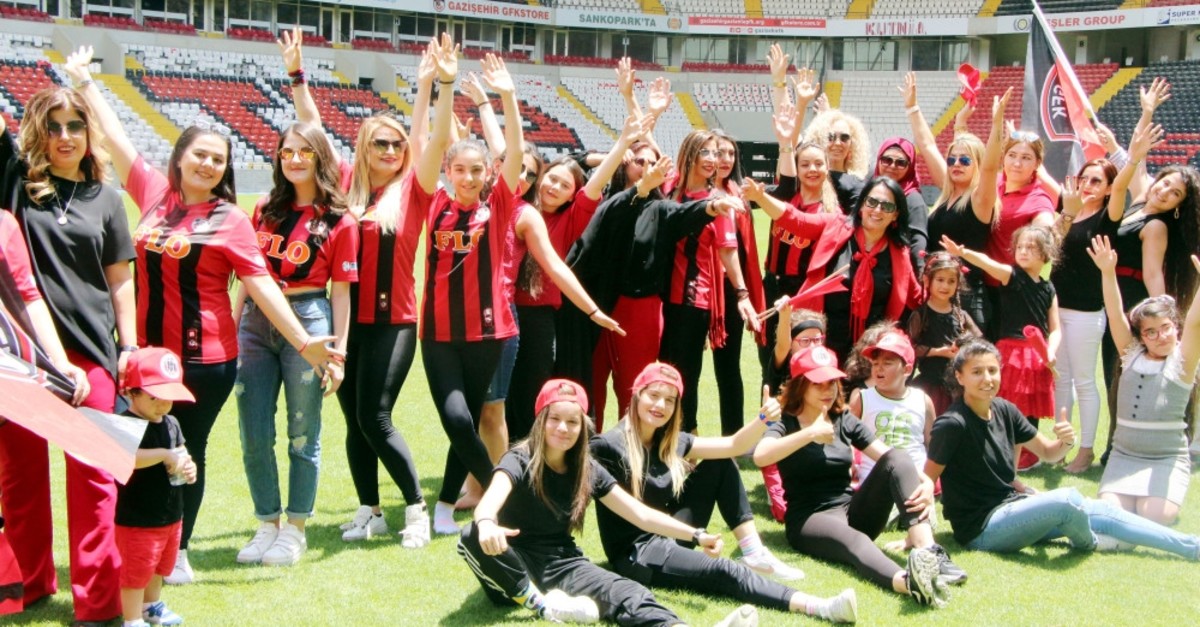 Established last year to end male domination in stadiums, the Gaziu015fehir Women Fans' Association has mobilized supporters to have more of a say in matches.
by Dogan News Agency Jun 17, 2019 12:24 am

The promotion of Gaziantep Gazişehir Football Club to the Süper Lig has become a matter of pride for its fans, including its 200-member women's supporters' group.

Members of the Gazişehir Women Fans' Association are already preparing ahead of the next season as they assembled at the stadium to rehearse how they would support their teams. The members are looking to color the bleachers as well as put an end to violence and insulting cheering in the stands.

Established last year to end male domination at the stadiums, Gazişehir Women Fans' Association has already rolled up their sleeves to have more of a say within the stadium, with the rise of Gazişehir to the Süper Lig.

Mezine Sırakaya, the president of the association with around 200 members, said in the new season Gaziantep women would stand by their team in the stand seats, setting an example for the whole country.

Women supporters held a meeting at Kalyon Stadium on preparations ahead of the new season and discussed their cheering and supporting strategies. They exchanged views on how to bring more women fans to the stadium and decided to come to the games wearing red and black nail polish, the colors of Gazişehir.

Having rehearsed and played football among themselves in the stadium, they look to boost interest in women's football in Gaziantep.

Mezine Sırakaya, President of the Women's Fans' Association, which supports Gaziantep teams in different sports, including football, basketball, volleyball, and hockey, said the most pressing matter was to put an end to male domination in sports.

She stressed football was not a male monopoly and that the tribunes should not come to the fore with violence, swearing and negative cheering. "Football and stadiums are associated with men. However, we have taken our place in the tribunes by establishing this association for the abolition of male domination in sports, thus breaking down the idea that only men could take part in football in the fields and in the stands," Sırakaya continued.

"As women supporters, we want to end the swearing, the violence, and ugly behavior in the stands. We do not want hooligans in the sports fields such as stadiums, halls and tribunes. Sport is a gentlemanly phenomenon that unites everyone. With this in mind, we will support our teams in the stadiums, keeping the men away from violence and bad cheering."

Underlining that they aimed to curb the hooliganism and to bring more women supporters to the tribunes, she said they would set an example to both Turkey and the world as the women of Gaziantep with their projects and support to the team. "Our goal is not to score but to dominate the sports culture in the tribunes," Sırakaya further noted. The association members also stated that they would both wear the team's colors as makeup and cheer for the players in the tribunes.