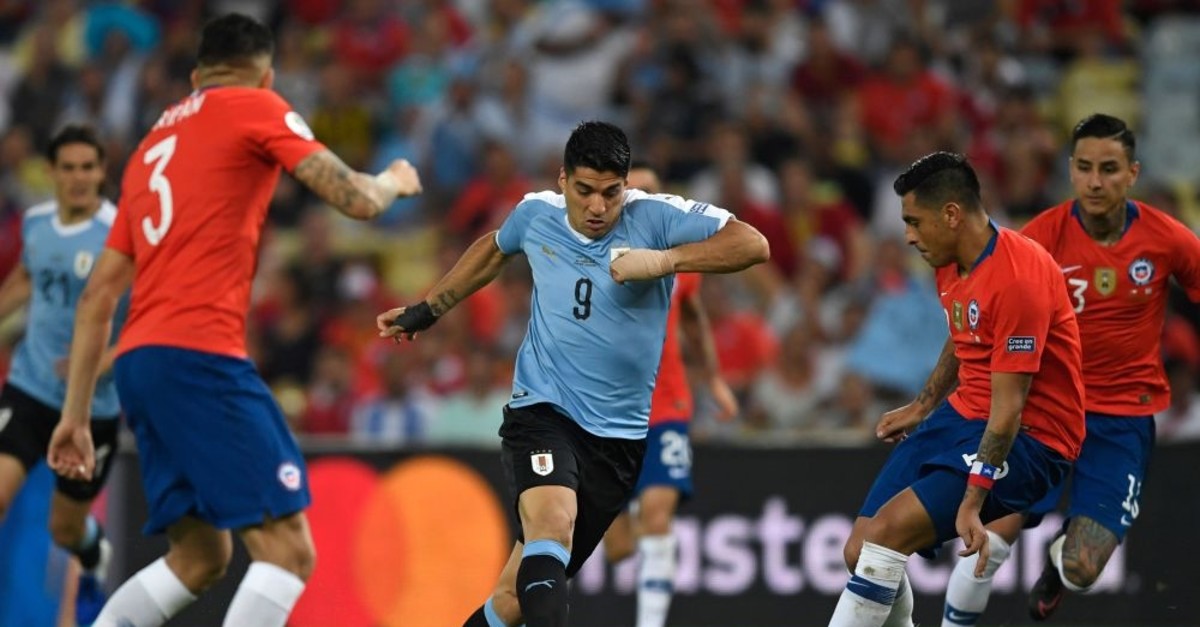 With a 1-0 victory against Chile, Uruguay reaches quarterfinals while guests Japan were eliminated from the tournament with a draw against Ecuador in the latest stage of Copa America

Edinson Cavani got some Copa America revenge against Chile on Monday, scoring Uruguay's only goal in the win against the defending champions. Cavani scored in the 82nd minute to help Uruguay move ahead of Chile into top spot in Group C and set up a quarterfinal against underdogs Peru instead of favorites Colombia in the South American tournament.

Uruguay will face Peru in the Arena Fonte Nova of Salvador on Saturday, while Chile will play at Sao Paulo's Arena Corinthians against Colombia on Friday. The Colombians have won all three of its matches and is yet to concede a goal in the tournament. Peru was thrashed 5-0 by Brazil on the weekend and advanced as one of the two best to finish their groups in third place.

Ecuador and Japan drew 1-1 in the other match of Group C, a result which eliminated both from the tournament.

Cavani's goal came after a gentle header to the right of Chile goalkeeper Gabriel Arias, after a cross by Jonathan Rodriguez, who entered during the second half. Shortly before Cavani scored, Chile had its best opportunity in the match. At 69 minutes, defender Paulo Diaz headed and Uruguay's Jose Maria Gimenez made a clearance near the goal line. More than 58,000 fans at the Maracana Stadium in Rio de Janeiro, mostly cheering for Chile, were already accepting a goalless result when Uruguay scored the winning goal.

"It could have been another result, this was a close match that was hard fought as if every ball was the last," said Uruguay coach Oscar Tabarez. "But that is Cavani. He never stops. Today he moved between different functions throughout the match, but his main characteristic he will never lose. He is a specialist, a goal scorer."

The match in Rio was far less tense than the last three of one of South American soccer's most lively rivalries, ending with Cavani's second goal in this year's Copa America.

On this same day four years ago the striker had a very different outcome against the same Chile. With the match at 0-0 in the quarterfinals of the 2015 Copa America in Chile, Chile defender Gonzalo Jara provoked Cavani by pushing a finger into his rear. The Uruguayan reacted by punching Jara and was sent off. Chile prevailed with a late goal and went on to win the tournament.

Jara, who had not played in any of the two previous matches of Copa America, was a starter for Chile at the Maracana stadium on Monday. His only effort that was noticeable this time was kicking a pitch invader when the match was 0-0.

"For me every goal is the same," the Uruguayan striker said. "I am not taking any goal or match as revenge. What matters is that I scored."

Chile coach Reinaldo Rueda said Jara started the match because he had other players at risk of suspension if they received yellow cards. "These are things of the past," Rueda said about the Jara-Cavani incident four years ago. The two teams also had rough encounters in 2018 World Cup qualifiers. Uruguay won 3-0 at home and Chile got revenge with a 3-1 win in Santiago. But at the Maracana Stadium neither team dominated for very long. Chile had more ball possession through the match, but Uruguay improved after midfielder Nicolas Lodeiro was substituted by Nahitan Nandez after the break.

Tabarez celebrated the win because he will be able to rest his team one more day to play Peru. He has already lost starting defender Diego Laxalt and midfielder Matias Vecino to injuries.