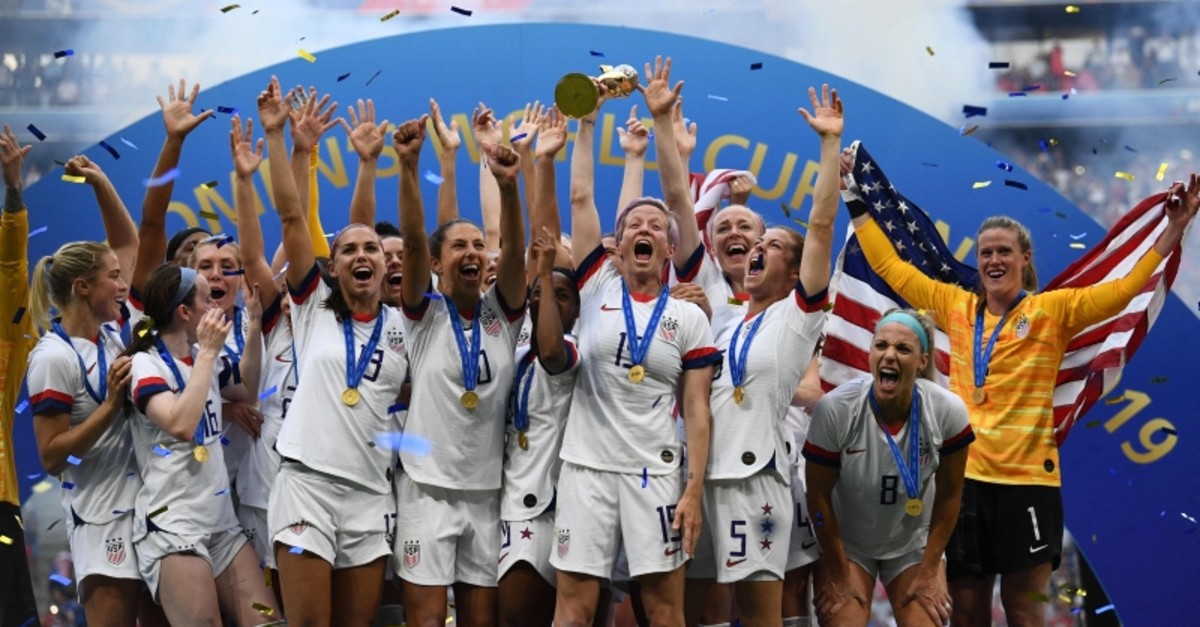 The United States defeated the Netherlands 2-0 to clinch its fourth FIFA Women's World Cup title in the final match in Lyon, France, on Sunday.

Having been kept at bay by the brilliant Dutch goalkeeper Sari van Veenendaal throughout the first half, captain Megan Rapinoe scored on a VAR-awarded penalty in the 61st minute to end the tournament as joint top scorer on six goals.

There was an air of inevitability about the pink-haired 34-year-old, the star of this World Cup on and off the field, putting the USA ahead.

It also seemed inevitable that the breakthrough goal here should come from a VAR-awarded penalty, with French referee Stephanie Frappart initially giving a corner before pointing to the spot following a review. 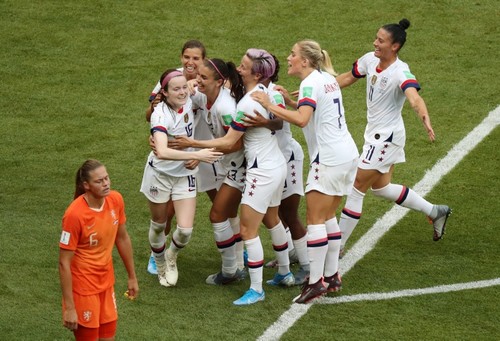 Midfielder Rose Lavelle, another stand-out performer over the last month, followed with a precision goal in the 69th minute, killing off Dutch hopes of a comeback.

Rapinoe topped off a victorious night by claiming the Golden Ball and Golden Boot.

Rapinoe bagged the Golden Boot for top scorer with her final goal Sunday to make it six goals and three assists from her five appearances in France, the same total as teammate Alex Morgan but in fewer minutes.

The 34-year-old, who may have played her last World Cup, won the Golden Ball for a series of match-winning displays which dragged the Americans to the trophy.

The victory Sunday underlined the USA's status as the dominant force in international women's football as they claim the World Cup for the fourth time in eight editions, adding to their World Cup titles from 1991, 1999 and 2015.

They were already the first team to appear in three consecutive finals, and coach Jill Ellis becomes the first coach to win back-to-back World Cups in the men's or women's game since Italy's Vittorio Pozzo in the 1930s.

The USA had been the only non-European team to make it to the quarter-finals here, but they had already ended the hopes of the hosts and England before denying the Dutch a dream double success, two years after they won Euro 2017 on home soil.

Whether the Americans can continue this domination on to the next World Cup remains to be seen, not least because Rapinoe is already in the twilight years of her career.

She was brought back into the starting line-up here by Ellis having sat out the victory over England in the last four due to a hamstring problem.

Christen Press made way but came on for the closing stages, as Rapinoe went off to a loud ovation from the massed ranks of USA fans.

At a tournament which has showcased the improving standards of goalkeeping in the women's game, the excellent Van Veenendaal prevented the USA from winning by a greater margin.

The 29-year-old, who has spent the last four years at Arsenal, had already excelled in her team's win over Sweden in the semi-finals.

Here, she allowed her team to withstand an onslaught from the holders towards half-time, saving well from Julie Ertz and bettering that by producing two superb stops in quick succession in the 38th minute.

Both American chances came from crosses from the left by Rapinoe. First Van Veenendaal stopped a Samantha Mewis header, and then she turned the ball onto the post when Alex Morgan diverted Rapinoe's low center towards goal.

Morgan was thwarted again moments later as she tried her luck from 20 yards, and the European champions held out until the interval.

The USA had scored no later than the 12th minute in all of their prior matches at this World Cup, but the Dutch, crucially, offered little going forward at the other end.

Still, it was 61 minutes before the holders went ahead.

The referee gave a corner when Stefanie van der Gragt challenged Morgan in the area, but changed her mind upon seeing the images. Rapinoe stroked in the first penalty scored in a women's World Cup final to claim a share of the golden boot with Morgan and England's Ellen White.

The Netherlands tried to regain their composure, but there was nothing they could do to stop Lavelle's piercing run towards the box midway through the second half.

She dropped her shoulder to set up the shooting opportunity, and fired in low from 18 yards. Van Veenendaal then saved from Morgan and Dunn to keep the score down, but the title was the USA's again.