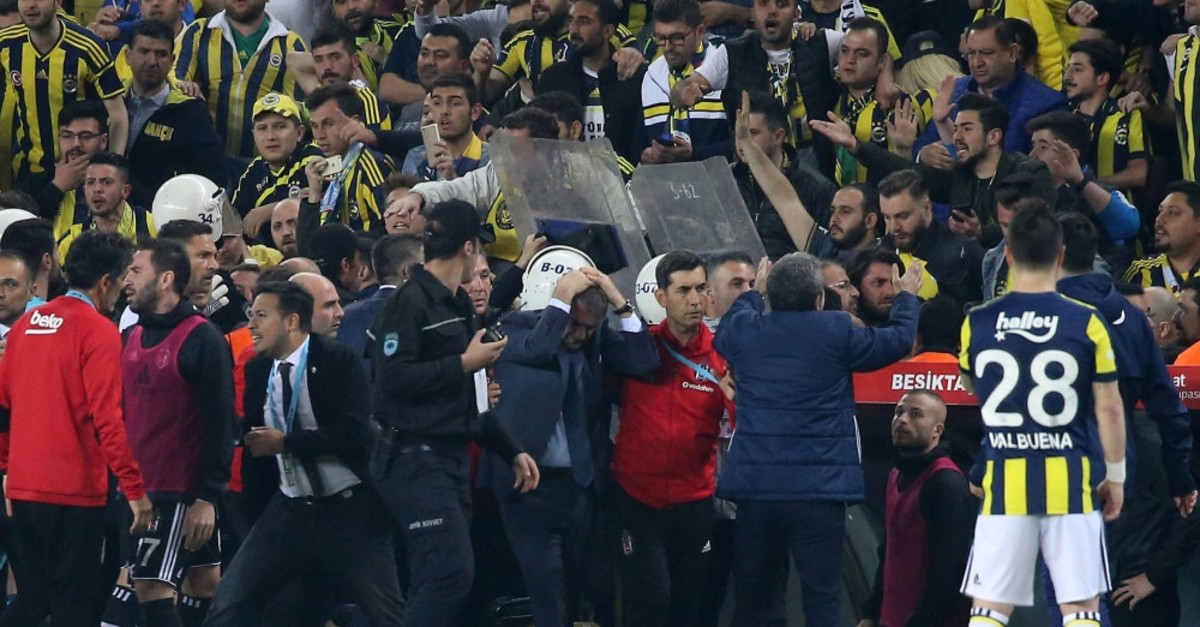 Turkey passed a new law Friday that calls for hefty punishments to clamp down on fan violence in and outside stadiums.

Under the new law, the designation of sports venues was changed to include places where fans gather before and after the matches and routes they use to arrive or leave sports events. Thus, security forces will be authorized to impose additional security measures against fan violence. It also revised and broadened the definition of fan violence.

More security personnel will be deployed inside the stadiums under the new law. It also has provisions for a ban on anyone other than players and club officials entering the locker rooms during, before and after the matches. The measure seeks to end brawls between rival teams and their supporters that often erupt in locker rooms during the breaks and after matches. Every club will be obliged to install an official in charge of stadium security under the new law. Clubs will be responsible for the security of the matches they host in their stadiums or courts.

Sports federations and clubs will be allowed to buy private security services but in top-tier professional leagues, law enforcement will also be deployed, and policemen deployed in matches will be paid additional fees for the duty. Clubs will also be obliged to hold security meetings before matches.

Fans or players will not be allowed to bring alcoholic drinks into stadiums, training grounds, grandstands and mass transit vehicles the fans or players take. Fines will be imposed for those bringing alcoholic drinks as well as narcotics to these places. The Firearms Law that carries prison terms will be in place for carrying guns, sharp objects or anything that can be used as a weapon to stadiums, training grounds and vehicles used for transporting fans.

Prison terms up to five years will be in place for those carrying objects that may cause injury into the event venues or on buses, trains, etc. that carry fans. Use of objects defined as weapons also carries the same sentence.

Those inflicting injuries on others or damaging property in sports venues will be handed down extra prison terms or fines in addition to prison terms and fines under the Turkish Penal Code for such crimes in other venues.

Another important article of the law is about chants. Chants containing threats or insults will be subject to fines. Chants containing discriminating slogans, such as racist slogans, slogans against one's ethnicity, religion, language or gender carry prison terms of up to three years. Punishable chants also cover those written or said in online videos as well as those expressed on TV, radio and other public platforms.

Heftier prison terms will be handed down to those who committed crimes defined in the law while wearing masks or other material concealing their identity.

Individuals encouraging fan violence through statements on media platforms will also be barred from sports events for one year.

In football-mad Turkey, fan violence has sometimes resulted in the deaths of fans of rival teams but has largely been spared punishment, except in cases involving injuries and murder.