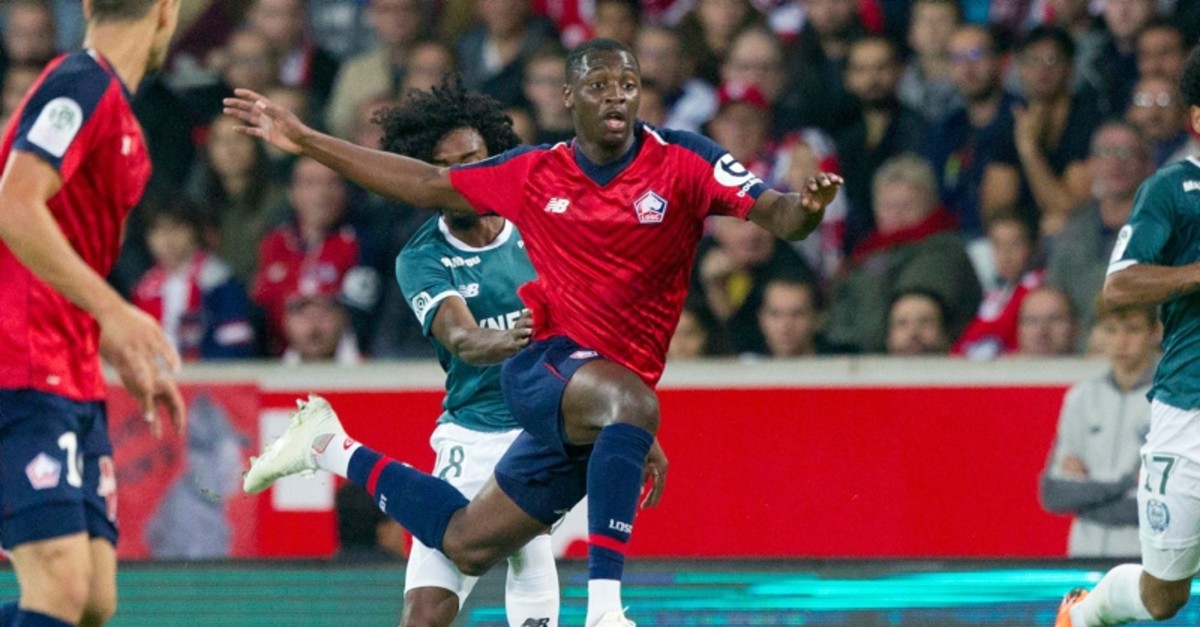 In this Saturday, Sept. 22, 2018 file photo, Lille's Nicolas Pepe, center, in action during the French League One soccer match against Nantes at the Lille Metropole stadium, in Villeneuve d'Ascq, northern France. (AP Photo)
by Aug 01, 2019 8:32 pm

Arsenal announced the signing of winger Nicolas Pepe from French side Lille on Thursday for a club-record fee reported to be 72 million pounds ($87 million).

The deal for the 24-year-old Ivory Coast international eclipses the 56 pounds million spent on Pierre-Emerick Aubameyang in January 2018 as the Gunners add another attacking option to their ranks.

The forward, who will wear the number 19 shirt, will add firepower to an Arsenal attack that saw Pierre-Emerick Aubameyang and Alexandre Lacazette score 50 goals between them in all competitions last season.

The length of Pepe's deal at the Emirates Stadium was not announced but is believed to be five years.

Arsenal manager Unai Emery said: "Nicolas is a highly rated and talented winger who was wanted by many of the top teams in Europe.

"Signing a top-class winger has been one of our key objectives in this transfer window and I'm delighted he's joining.

"He will add pace, power and creativity, with the aim of bringing more goals to our team."

Pepe scored 22 Ligue 1 goals last season and was linked with a host of clubs over the summer including Manchester United and Napoli.

He was behind only PSG's Kylian Mbappe in the Ligue 1 scoring charts as Lille finished second to qualify for the Champions League.

"Being here is very emotional because it has not been easy for me," he said in an interview on Arsenal's website, describing himself as quick and a good finisher.

"I have come a long way and struggled a lot and so signing for this great club is a big reward."

Pepe said he was looking forward to playing alongside Lacazette, Aubameyang and Mesut Özil.

"Of course, these are the players who sprang to mind because I used to watch them when I was at Lille," he said.

"Also, Lacazette used to play for Lyon and so I have had the opportunity to play against him and it will be an honor to play alongside him."

The signing of Pepe follows the arrivals of forward Gabriel Martinelli, the season-long loan of Real Madrid midfielder Dani Ceballos and the transfer of defender William Saliba -- who will spend the 2019/20 campaign back on loan at St Etienne.

Arsenal finished a disappointing fifth in the Premier League in Emery's first season in charge, missing out on Champions League qualification for the third year in a row.

Their first match of the Premier League campaign is away at Newcastle on Aug. 11.