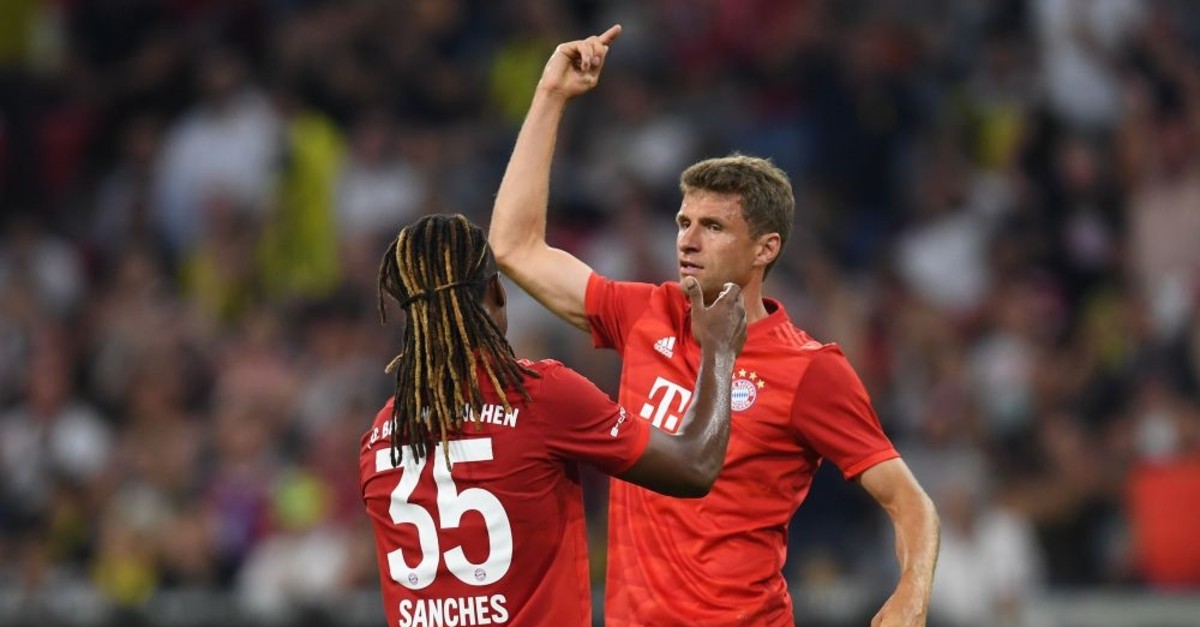 It took only 22 minutes for Bayern Munich to start a goal bonanza against visiting Fenerbahçe. Fener coach Ersun Yanal said after a 6-1 drubbing in the Audi Cup that the loss would expose his new lineup's capacity

In the first leg of Audi Cup, the Bundesliga side mauled the Yellow Canaries, thanks to a Thomas Müller hat trick and goals by Renato Sanches, Leon Goretzka and Kingsley Coman.

Fener coach Ersun Yanal said it was an opportunity to see how capable his players are, as he still struggles to strike a balance in his squad after taking the helm following a tumultuous season.

With a few weeks until the start of the Süper Lig, the tournament in Germany gives an opportunity to the ailing Canaries, who narrowly avoided relegation last season, to address their shortcomings in defense and offense.

The match at Munich's Allianz Arena was short in shots on goal at first for the German side. Robert Lewandowski then inspired the team with a skillful pass to Sanches, who converted it to an easy goal.

In the 28th minute, Leon Goretzka managed to connect with a low cross from Kingsley Coman to score the second. Then came the first in Thomas Müller's hat trick in the 31st minute.

Müller charged against Nabil Dirar of Fenerbahçe, who almost drove out Bayern's offensive before Müller targeted Dirar's pocket inside the box. The fourth goal by Leon Goretzka was ruled out by referee after a foul and it was Kingsley Coman to score the fourth one for the German outfit in 40th minute. Just before the first half, Müller scored his second goal. Müller finished his hat trick in 58th minute.

The Turkish team was set to confront Real Madrid for third place in the tournament while Bayern Munich was scheduled to take on Tottenham Hotspurs for the finals when Daily Sabah went to print yesterday.

Nabil Dirar, who replaced injured Hasan Ali Kaldırım in 24th minute, faced constant booing by Fenerbahçe fans after Bayern's third goal. As the loud booing escalated, an apparently frustrated Dirar wanted out in 73rd minute, tossing the ball away. Other players and coach Yanal convinced Moroccan international to stay. Dirar apologized to fans following the match for his act. "I was disappointed with the score but I also understand the fans' reaction. They were angry like me," he said in a social media post. "I never averted playing for the team, neither in training nor in matches. I am here in this club because I love you," he told fans in a social media post after the match.

In a post-match press conference, Ersun Yanal said it has been a long time since they played in Allianz Arena, against "a rival that strong." He acknowledged that Fenerbahçe was struggling against several problems and challenged with "being a team."

"This match had important consequences for us. It was important to see what our players can do," he said, adding that the team was "in a mess" after multiple goals. "We have to get rid of this manner. Many players failed in defending their position. We noticed the need to fix this," Yanal told reporters. He said Fenerbahçe was working to learn lessons from its mistakes and to fix them.

He admitted that the team did not have a "rich" lineup and they were working to address their shortcomings. "We have strong players but we still miss players for [key positions]," Yanal said, adding that they were working on bringing in new transfers.