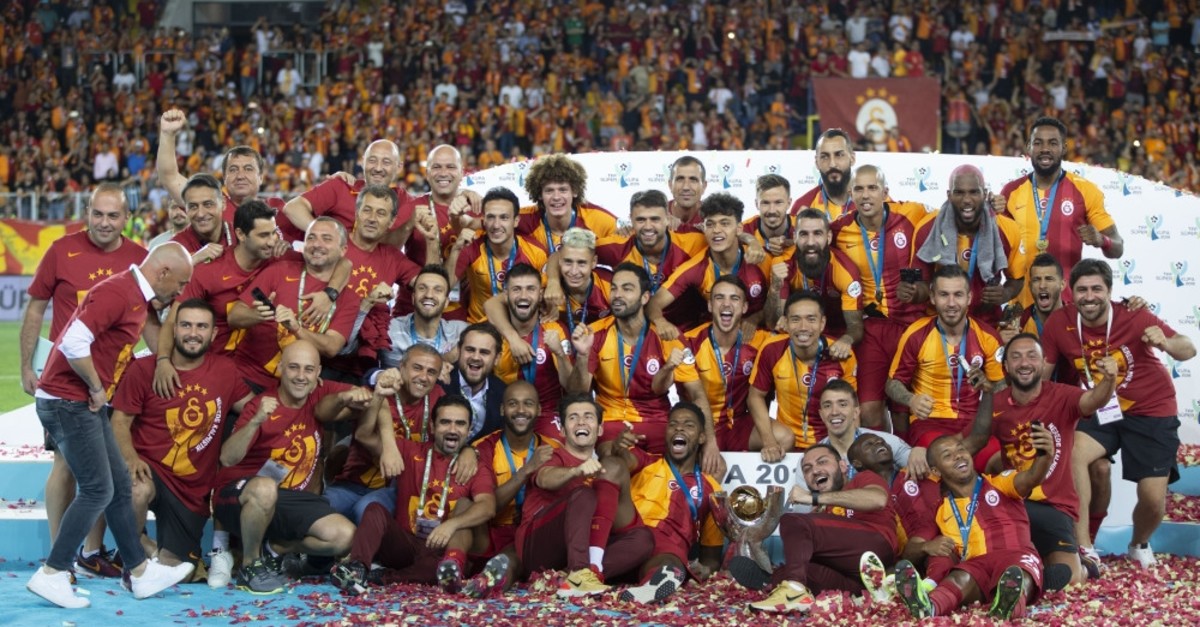 Galatasaray celebrated their victory against Akhisarspor.Belhanda scored the Lions' only goal in the 39th minute.
by Daily Sabah Aug 09, 2019 12:16 am

Galatasaray's winning streak continued Wednesday night with a 1-0 victory against Akhisarspor that brought the Lions their third trophy this year, the Super Cup

Galatasaray completed Wednesday a clean sweep of all available trophies this year, beating Akhisarspor 1-0 to win the Super Cup in the capital Ankara.

The Süper Lig champion was challenged by Akhisarspor in the Ziraat Turkey Cup back in May, where the Lions had beaten the Aegean outfit 3-1. This time around they cruised past Akhisarspor thanks to a 39th-minute goal by Younes Belhanda. This was Galatasaray's sixth Super Cup and a much welcome preseason win for the team that heads into regular season mid-August.

The Lions missed their legendary coach Fatih Terim as the hot-tempered trainer was banned from the pitch for unruly behavior in an earlier match but they had a chance to try out new transfers including Jean Michael Seri, Jimmy Durmaz, Adem Büyük, Ryan Babel and Emre Mor.

However, it was the old fixture Younis Belhanda to score their only goal, the 29-year-old French midfielder turned Galatasaray's fifth opportunity into a goal with a fine shot from the left.

More chances followed, including a second for Belhanda, who was fed in with a skillful pass by Ryan Babel in the 82nd minute but Akhisarspor's all-out defense proved difficult for the Lions to overcome.

Galatasaray, one of the oldest clubs in Turkey, is no stranger to the trebles it last won the same trophies back in 2015. It now the proud owner of the most number of Super Cup titles, six.

Belhanda was chosen a player of the match and received his award from Youth and Sports Minister Mehmet Muharrem Kasapoğlu.

Galatasaray won the cup five times and Fenerbahçe is three-time winners while Beşiktaş, Trabzonspor, Konyaspor and Akhisar have each won it once.

The Lions lost their first Super Cup to Beşiktaş in 2006 and it took them another two years to secure their first title after they defeated Kayserispor in 2008.

This was Terim's 20th trophy with the Lions. He returned to Galatasaray last year after a spell with the national team. Terim showed up at a post-match press conference where he sat quietly before joining celebrating players invading the press room. He also lifted the trophy with players on the pitch.

Speaking after the match, Galatasaray Vice Chairman Abdurrahim Albayrak said the Lions were "quite accustomed to trophies." "We ended the season with a trophy and will begin the next season with another. There will be more. This [victory] boosted our morale before the start of the season," he said. He also hinted to more signings in the coming days for "a good start to the season."

Team captain Selçuk İnan, who has been with Galatasaray in 14 title wins, said he was "proud and happy." "Winning three trophies in one season is probably something you can see only once in one or two decades," he said.