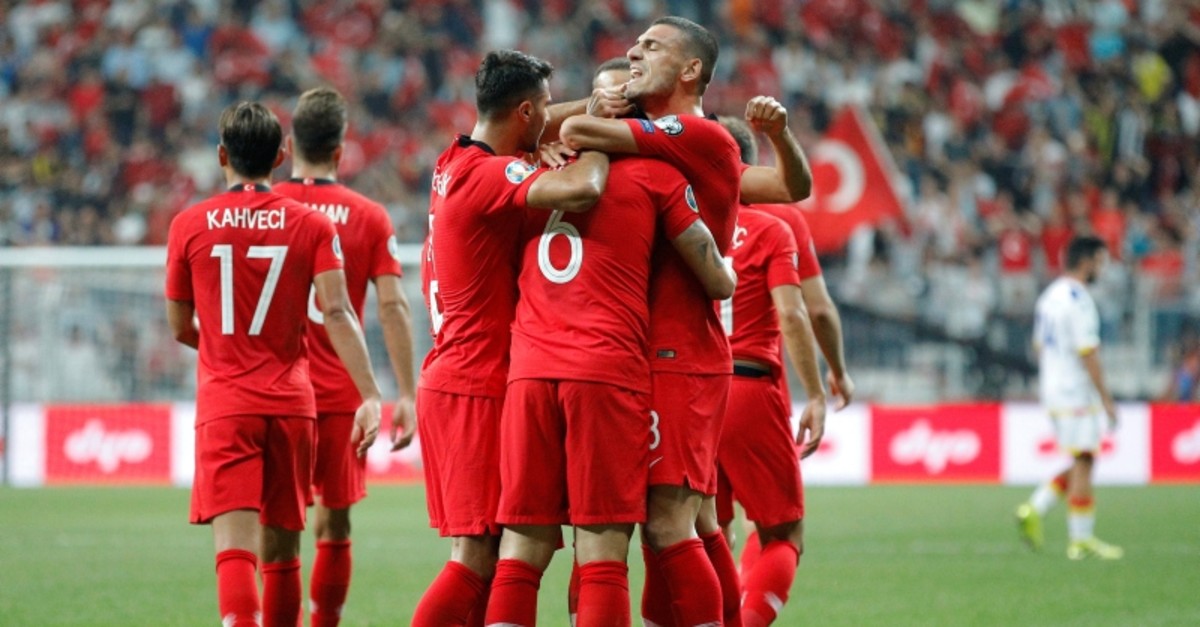 Turkey wrapped up its first Euro 2020 qualifier campaign with a last minute goal against Andorra on Saturday, clinching second place in its group

The Turkish national team relaunched its Euro 2020 campaign by taking on Andorra on Saturday in Istanbul. An 89th minute goal gave Turkey its first victory in the qualifiers.

The team continued its balanced streak in Group H; this was its fourth win in five matches and put Turkey behind leader France with 12 points and ahead of Iceland, the only team it lost to so far in qualifiers. Turkey will now confront Moldova in an away game tomorrow in Chisinau while Andorra hit rock bottom without any points after it lost its fifth game in the qualifiers. This was indeed a hat-trick of sorts for Andorra as Turkey defeated it 2-0 and 5-0 in all three games it played against the European side since 2013.

The match in Vodafone Park stadium near the Bosporus shore was played in front of a sold-out crowd including President Recep Tayyip Erdoğan. The president, a former footballer himself, visited the team in the locker room after the match and congratulated the players.

It was the fifth goal for the national team for Fenerbahçe midfielder Ozan Tufan in 44 matches while fans broke into cheers for Emre Belözoğlu as well. Belözoğlu, the veteran Fenerbahçe playmaker, marked the 100th time he capped for Turkey in Saturday's game. Tufan was among multiple substitutes during the game as coach Şenol Güneş fell into despair for a tiebreaker. He replaced Umut Meraş in the 61st minute. Sivasspor midfielder Emre Kılınç also capped for the national team for the first time when he replaced Hakan Çalhanoğlu in the 81st minute.

"I congratulate the team, we held out for a long time," Andorra coach Koldo Alvarez said in a post-match press conference, praising his players "who did everything against pressing Turkey."

"This was how we expected the match to play out. We struggled pretty well and held out especially against Hakan Çalhanoğlu and Cenk Tosun. We focused on shutting down the midfield for them in the first half and we accomplished that," Alvarez added.

Turkey's coach Şenol Güneş lamented that the goal came very late in the game but said it was better than the "historic shame" of a 0-0 draw. "We have better players now but it is worrying that we scored very late. Other than that, I believe all players did their best in the match."

"I was expecting a historic victory but we almost had a 0-0 draw," Güneş said.

In other matches on Saturday, France and England moved to the top of their Euro 2020 qualifying groups as they strolled into easy wins.

Kosovo are second in Group A behind England after a 2-1 win over the Czech Republic, extending their unbeaten run to 15 games. Ukraine beat Lithuania 3-0 to march clear at the top of Group B, while Portugal won 4-2 in Serbia to finish second.

France's match in Saint-Denis started inauspiciously as the Andorran national anthem was played instead of the Albanian, with the visitors not willing to kick-off until the situation was remedied. However before the correct anthem was played the stadium announcer mistakenly issued the apology "to Armenia." France was far more slick on the pitch and Bayern Munich's Coman was on target twice in an impressive display.

The winger was included in the starting lineup because of Paris St. Germain forward Kylian Mbappe's injury and took his chance with both hands. Didier Deschamps's side took the lead after eight minutes when Coman finished calmly after a fine through pass from Real Madrid defender Raphael Varane.

Barcelona's Antoine Griezmann should have made it three but hit the crossbar with a penalty kick.

Coman netted his second after the break after a slick team move to give France's lead some deserved padding, with substitute Jonathan Ikone netting a fine fourth.

Hugo Lloris conceded a late penalty for France and could not avoid Sokol Cikalleshi's consolation.

Iceland thrashed Moldova 3-0 in Reykjavik to sit third, level on 12 points from five games with leaders France and Turkey.

Kolbeinn Sigthorsson broke the deadlock shortly after the half-hour mark as Iceland dominated the game.

Birkir Bjarnason grabbed the second from close range in the 55th minute, with Victor Mudrac's own goal completing the rout.

Gareth Southgate's England moved to the top of Group A ahead of Kosovo with Kane bagging a treble against a weak Bulgarian side.

Kane had an early goal disallowed for offside but was soon on the scoresheet when Bulgaria goalkeeper Plamen Iliev gifted Raheem Sterling the ball and he teed up the England skipper.

It was the only strike of a dull first half at Wembley but Kane doubled his tally from the penalty spot early in the second period when Nikolay Bodurov brought down Marcus Rashford. Kane set up Sterling for the third after 55 minutes as England ripped apart their opponents. The Tottenham striker added his third from the penalty spot as England saw out the game in style.

"In a game like this you have got to make sure the concentration is right. I always felt we had enough firepower to win the game," said Southgate. "I'm generally pleased. Some of our attacking play was really exciting."

Ukraine stayed unbeaten too and recorded their fourth win in five qualifying matches to extend their commanding lead at the top of Group B to eight points with a comfortable triumph in Lithuania.

First-half strikes from Oleksandr Zinchenko and Marlos put them in control and Ruslan Malinovskyi added the third after the break with a powerful drive as the visitors maintained a fourth clean sheet.

Portugal edged a thriller in Serbia to usurp their opponents and move into second place.

William Carvalho and Goncalo Guedes put the visitors two goals up, with Cristiano Ronaldo adding a third after Nikola Milenkovic pulled one back.