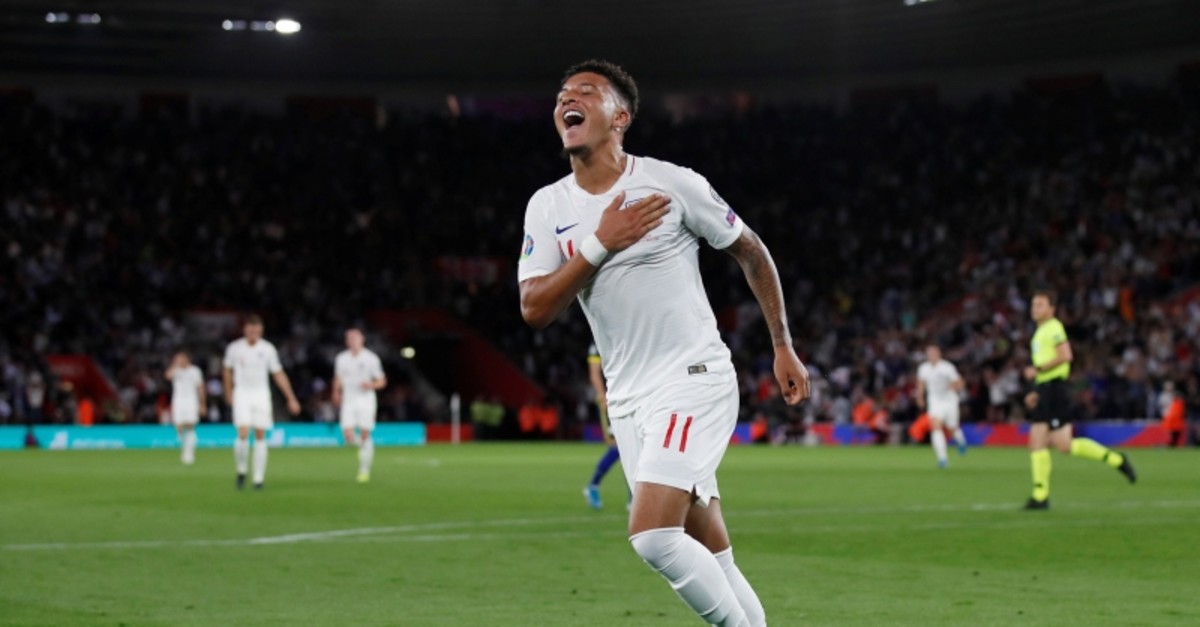 England's Jadon Sancho celebrates scoring his side's fourth goal of the game during the Euro 2020 group A qualifying football match between England and Kosovo at St Mary's Stadium in Southampton, England, Tuesday, Sept. 10, 2019. (Reuters Photo)
by Sep 14, 2019 12:04 am

Deal or no deal? The consequences of Brexit could impact the might of England's Premier League while the Football Association hopes for a boost to the national team

There appears to be no end in sight to the Brexit theater. The United Kingdom should exit the European Union on October 31 but the latest developments mean further delay is possible.

British Prime Minister Boris Johnson claims to be optimistic a withdrawal agreement between London and Brussels can still be reached while insisting a no deal exit, despite parliament legislating against it, remains an option.

Meanwhile, football clubs in England and Scotland are looking on, wondering what happens next.

The Premier League, in consultation with England's lower leagues and the Scottish league organization, said "Brexit should not be used to weaken playing squads in British football, nor to harm clubs' ability to sign international players."

But a no deal Brexit could have negative consequences for British teams in the transfer market.

What could change with Brexit?

If London and Brussels don't establish a withdrawal agreement, the same restrictions currently applied to non-EU players could be imposed on those from inside the bloc. That would make it especially difficult for smaller and/or lower league clubs to sign foreign players. It would also make it harder to attract the best foreign youths to the country.

What consequences would Brexit have for British players abroad?

After Brexit British players would not find it easy to move to an EU country before the age 18. Jadon Sancho, who moved to Borussia Dortmund aged 17 for example, would not have been able to do so post-Brexit. In the worst case, players like Sancho could lose their right to work in the EU following a no deal Brexit.

Could the FA not accommodate the clubs?

It could but has so far indicated little interest in doing as the FA believes Brexit offers a chance to boost the English national team. FA president Greg Clarke has expressed the hope that potential restrictions

would mean only world class foreigners come to play in England and excluding journeyman pros would increase the opportunity for young English talents to play.

What do managers make of Brexit?

They are largely skeptical. Liverpool boss Juergen Klopp believes Brexit to be a mistake. "History has always shown that when we stay together we can sort out problems," he told the Guardian newspaper. "When we split then we start fighting." In contrast Neil Warnock of Cardiff City, relegated from the Premier League last season, said: "I can't wait to get out. To hell with the rest of the world."

How does the FA decide to approve incoming players?

To agree to a transfer of a non-EU player and recommend a work permit, the player - generally - must be an established international. The FA considers the world ranking of a players country to decide what ratio of appearances is required so an Ivory Coast (outside the top 50 in the world) international must play nearly constantly for his country while a player for World Cup winners France may have to meet lower criteria.