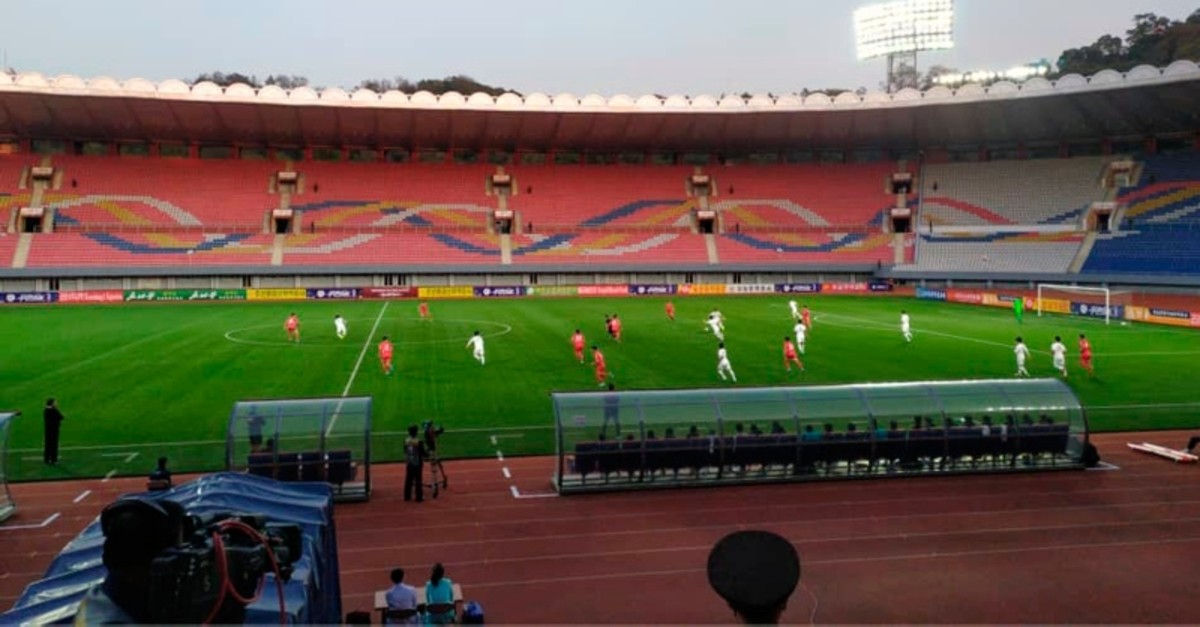 North Korea held South Korea to a 0-0 draw Tuesday in a World Cup qualifying soccer match, though it is unclear how many people saw the game in Pyongyang.

South Korean soccer officials were unable to watch a telecast of the historic game and believe it was played in an empty Kim Il Sung Stadium.

North Korea kept out South Korean media and spectators and refused to air a live broadcast from the stadium, casting the game into media darkness in the South.

FIFA President Gianni Infantino was in Pyongyang and planned to attend the match, but FIFA could not immediately confirm to The Associated Press if he was there.

The North had been expected to have a unique home advantage in the 50,000-capacity stadium devoid of South Korean fans. But the South Korean soccer association, known as the KFA, was surprised to find out there apparently was no home crowd support, either.

"Photos sent by our employees show not a single person in the stands," KFA official Park Jae-sung said. "We are not sure why the North is doing this."

The KFA sent two staff members to the stadium to watch the game, but ruled out live text updates on its website because of uncertainties in internet connection.

It recommended that fans watch the KFA's social media accounts, where it posted game information its employees emailed from Pyongyang.

North Korea has agreed to provide a recording of the match to South Korean officials before they leave the North, which would allow South Korean networks to play the game on tape delay, according to Seoul's Unification Ministry, which deals with affairs with the North.

The game is the first competitive meeting between the national men's teams in the North Korean capital, although the North hosted the South in a friendly in 1990.

North Korea in recent months has severed virtually all cooperation with the South amid a standstill in nuclear negotiations with the United States, and repeatedly ignored the South's calls for discussions on media coverage issues and allowing South Korean cheer squads for Tuesday's game.

"There was no response from the North, and we find this regrettable and sad," Unification Ministry spokesman Lee Sang-min said Monday.

The ministry couldn't immediately confirm whether the Koreas have ever before played a soccer match in an empty stadium. Yang Moo-jin, a professor at Seoul's University of North Korean Studies, said he was confident this was the first time.

"So, we have another historic moment," Yang said.

While North Korea was clearly expressing its political displeasure with the South by shutting out rival reporters and fans, its decision to compete in an empty stadium at home was likely an effort to level the playing field and avoid any questions about fairness, Yang said.

Choi Kang, vice president of Seoul's Asan Institute for Policy Studies, said North Korea might have been concerned about the possibility of its national team losing to the South in front of a home crowd of 50,000, which would have been a humiliating development for leader Kim Jong Un.

The awkward buildup to the game "demonstrates the immense discontent North Korea has for (South Korea)" for its failure to break away from ally United States and restart inter-Korean economic projects held back by U.S.-led sanctions, Choi said.

South Korea's two Group H matches against North Korea will be critical in qualifying for the World Cup. The second match between the Koreas is scheduled for June 4 in South Korea.

Before the game, Kim Hyun-tae, who was South Korea's goalkeeping coach at the World Cups in 2002 and 2010, said he was worried more about the Pyongyang stadium's artificial grass, where balls bounce and travel differently than natural grass surfaces.

"It requires different touches in trapping, passing, shooting, crossing and avoiding tackles and players may find it difficult to adjust on the fly," Kim said.

Previously, the Koreas faced each other four times during qualifying for the 2010 World Cup. The games were initially scheduled as home and away, but North Korea rejected the idea of hoisting the South Korean flag and playing the South Korean anthem on its soil.

Following an intervention by FIFA, the Koreas eventually agreed to relocate North Korea's home games to Shanghai. The matches resulted in three draws and one South Korea win before both countries qualified for the tournament in South Africa.

South Korea had dominated the past 16 matches with seven wins, one loss and eight draws.

The fate of the game in Pyongyang was uncertain until last month when the governing body of Asian soccer informed the KFA that the North decided it would host the qualifier as scheduled.

Sports often became an alternate political battlefield between the Koreas when relations were bad, with North Korean athletes and coaches rejecting handshakes with their South Korean counterparts.

During the Cold War, North Korea boycotted the 1986 Asian Games and the 1988 Olympics in Seoul. Relations significantly worsened on the eve of the Seoul Olympics with the bombing of a South Korean passenger jet that killed all 115 on board in 1987. South Korea concluded the bombing was a North Korean attack aimed at scaring off Olympic visitors.

Things were dramatically different when the Olympics came to South Korea for the second time last year. North Korean leader Kim sent hundreds of officials, athletes and artists to the Pyeongchang Winter Games while initiating diplomacy with the South following years of tensions over its nuclear and missile tests.

The Koreas marched together during the opening ceremony and fielded their first combined Olympic team in women's hockey, which drew passionate crowds despite the team going 0-5.

However, sports exchanges between the Koreas dried up in recent months amid revived tensions. North Korea has ignored South Korea's calls to organize combined teams in field hockey, basketball, judo and other sports for the qualifying rounds for the Tokyo Olympics. It also refused to send North Korean athletes to the world swimming championships in the South Korean city of Gwangju earlier this year.