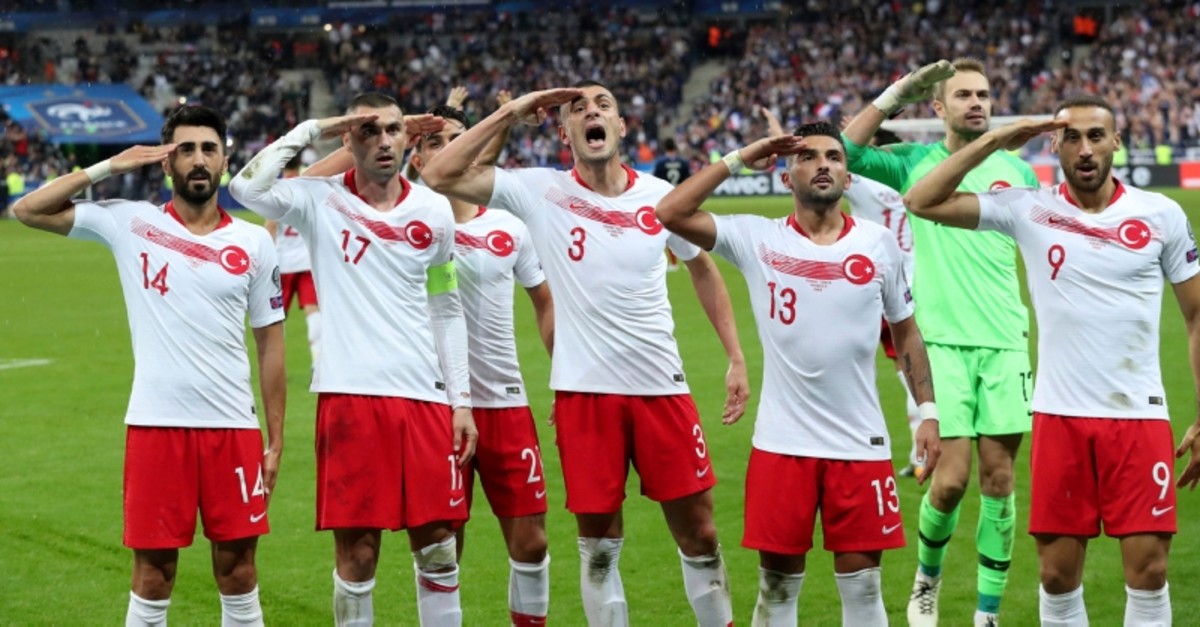 In this Monday, Oct. 14, 2019 file photo, Turkey's players salute as they celebrate a goal against France during the Euro 2020 group H qualifying match between France and Turkey at Stade de France at Saint Denis, north of Paris, France. (AP Photo)
by Daily Sabah with Agencies Oct 16, 2019 5:53 pm

The investigation launched by UEFA against Turkey for a military salute performed by players of the national football team revealed the politically motivated double standards of European football's governing body.

Turkish national team players gave military salutes while celebrating a goal they scored during the UEFA Euro 2020 qualifiers against Albania in Istanbul, as well as during their match against France in Saint-Denis. The team dedicates their goals to Turkish soldiers currently fighting in northern Syria in the ongoing Operation Peace Spring.

UEFA initiated "disciplinary investigations" for the matches, appointing an inspector with regard to "potential provocative political behavior," UEFA said in a statement.

Claiming the salutes at the end of a Monday match against France were "contrary to the spirit of sports," French Sports Minister Roxana Maracineanu tweeted, expressing her request that UEFA take action against Turkey.

Pointing out that French star Antoine Griezmann gave a similar salute before, Turkey's Youth and Sports Minister Mehmet Muharrem Kasapoğlu said, "Whoever said nothing about Griezmann's military salute is trying to distort our footballers' grateful salute."

"l call on UEFA to act sensibly on this investigation request," Kasapoğlu said in a press conference.

As reported by Anadolu Agency (AA), military salutes by prominent football figures are actually very common in football fields. While these celebrations were televised or covered as nice or innocent gestures by the media before, on the contrary, Turkish players’ celebrations were censored, condemned and investigated.

Griezmann once again did a military salute in front of Macron at the Elysee Palace when Macron hosted players to congratulate their victory in the World Cup. The footage of the moment was heavily covered by international media as a “nice gesture.”

One of the best players in the world, Cristiano Ronaldo celebrated his goal with a soldier's salute, along with his team mate Marcelo, when he was playing for Real Madrid.

Another example of a military salute is Croatian player Mario Mandzukic’s goal celebration when he was playing for Bayern Munich.

Other examples include many world stars such as Thierry Henry, Samuel Eto'o and Emmanuel Adebayor. All of these players celebrated their goals performing military salutes when they were playing in prestigious games that millions watched. However, none of these actions were censured, investigated or punished.

Meanwhile, Turkish soldiers in northern Syria hailed the Turkish nation and national players who performed military salutes at sports events in honor of Turkey's anti-terror operation in Syria that was launched last week.

"We received the salutes of our national players and teams who became champions. Don't worry, we are on duty for our country and nation," Turkish soldiers said in a video posted by the Turkish National Defense Ministry on Twitter yesterday with the hashtag "Salute Turkish soldiers.”

Speaking about the UEFA’s investigation, President Recep Tayyip Erdoğan yesterday said that the national team has its own national perception and shared it with Turkish supporters there. Erdoğan added that he does not expect the investigation to lead to serious consequences.

A similar trend to UEFA’s actions is being witnessed in different countries as the military salute of Turkish players has become a hot topic. At least five German regional football teams face disciplinary action after their players imitated the military salute performed by the Turkish national team during matches last weekend.

Germany has a Turkish population of around 2.5 million people and three teams in the Recklinghausen district, near Gelsenkirchen, will face a disciplinary committee after pictures posted on social media showed their players made the controversial salute to celebrate goals.

"In one case it was the whole team, in another case, it was five or six players," Hans-Otto Matthey, the district chairman of the Westphalia Football and Athletics Association (FLVW), told Agence France-Presse (AFP) subsidiary SID.

Matthey said making the clubs responsible should discourage other teams in the region, which has a sizeable Turkish community, against repeating the gesture in this weekend's matches.

"I predict that nobody else will have the nerve to repeat something like this," he added.

There were also two further cases of teams in Bavaria making the salute gesture, with both clubs also set to face disciplinary measures.

On Tuesday, both the Bavarian (BFV) and North German Football Associations (NFV) warned players in their areas to expect "heavy penalties" for imitating the military salute.

"Insults and provocations have no place on or off the pitch and will not be tolerated", an NFV football official told SID.

The German Football Association (DFB) took a similar stance over the weekend.

Germany internationals Emre Can and İlkay Gündoğan, who have Turkish roots, apologized on Sunday after they both clicked “Like” on a picture of the Turkish footballers saluting during Friday's 1-0 win over Albania, which they later removed.

"We are against all forms of violence and discrimination," said national team director Oliver Bierhoff.

Also, Mehdi Bebri, a football player in Iran, was temporarily banned from football activities by the national football association after he posted pictures of the Turkish flag and a Turkish soldier to show his support to the ongoing Operation Peace Spring.