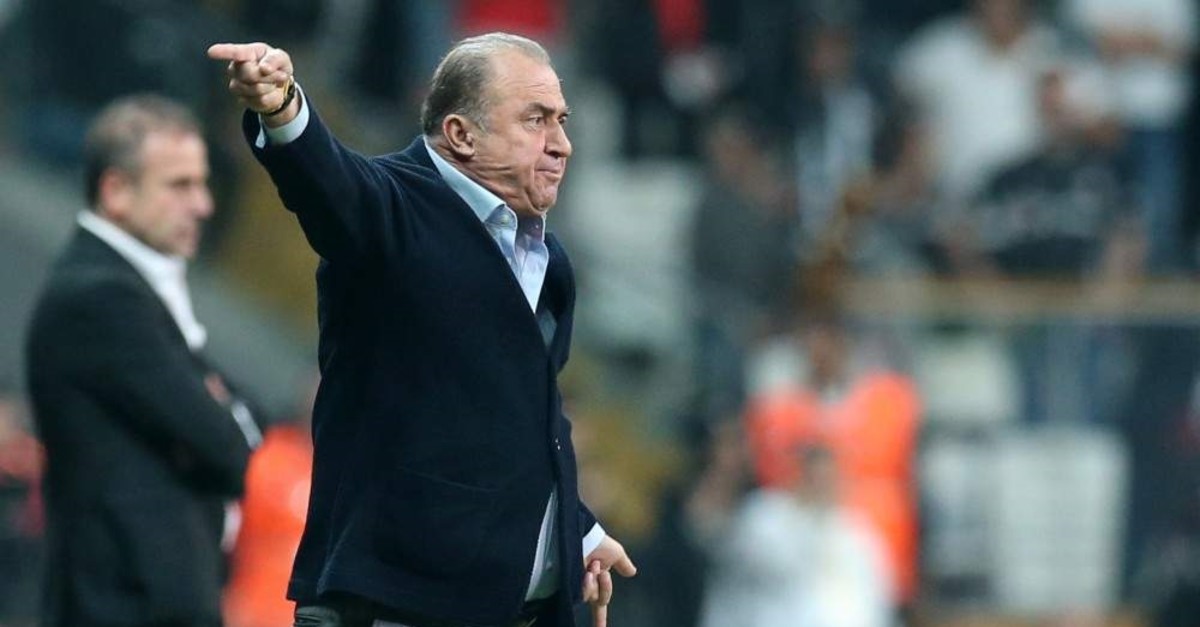 Fatih Terim gesturing to players in the Galatasaray-Beu015fiktau015f derby, Istanbul, Oct. 27, 2019 (AA Photo)
by Arda Alan Işık Oct 28, 2019 2:49 pm
One of the worst Beşiktaş’s of all times managed to beat fairly talented Galatasaray 1-0 in an absolutely chaotic game. There was simply nothing pre-planned or strategized about the game, everything was momentary and accidental. The only difference between the two teams was that when Beşiktaş found an opportunity, they made it count, while Galatasaray could not. The result could be easily vice versa, but luck was on Beşiktaş’s side this time. Nevertheless, Fatih Terim should ask himself how he could not beat one of the worst Beşiktaş’s of all times, despite having a much better squad. If he had created at least a decent strategy, Beşiktaş would have stood no chance against Galatasaray.
As the weak side, Beşiktaş manager Abdullah Avcı did what he had to do and let Galatasaray play with the ball. This forced Galatasaray to settle in Beşiktaş’s half and leave enough space for counter-attacks in their half. But Beşiktaş’s main striker Burak Yılmaz was injured and his replacement Umut Nayir was too slow to utilize this. Still, Beşiktaş managed to cripple the game and turn it into a brawl in the midfield. This situation was more favorable to Avcı’s team as they were lacking in the talent department and it was obvious that Galatasaray would find opportunities if given enough time and space.
However, as Beşiktaş left the ball to Galatasaray, it was Fatih Terim’s time to shine and seal the game. As I always emphasize in my columns, the real value of a manager is best evaluated by his strategies when he has the ball, time and space. Terim had all three of them against Beşiktaş, plus a good number of talented players, that Beşiktaş did not have. But Galatasaray could not create opportunities and conceded an extremely basic goal from a less talented team. This is clear proof that Terim has not prepared any specific plan about how to beat Beşiktaş when his team possessed the ball.
On the other hand, Abdullah Avcı should be grateful to Fatih Terim, as the latter allowed him to keep his job for the time being. In my last piece, I questioned the mental breakdown of Beşiktaş against Braga and came up with possible explanations: Either there is no money or the players have lost confidence in their manager. According to rumors a good amount of players’ salaries were paid before the derby, which boosted the team’s morale. Thus, it is both good and bad news for Beşiktaş that the problem is money, not the manager. Of course, the financial crisis is the biggest problem for Beşiktaş right now, but it is more manageable than discontent in the locker room.
But Avcı must acknowledge that his squad is not capable of playing a good possession game right now. He has to prioritize defense until he brings his players to a new level, in which they can play a more daring game. If he tries to push his players’ limits too early, he can break their confidence and lose them eventually. With this derby victory, he has the chance of making a new start and he should not make the same mistakes that he did two months earlier. A game that is suitable for the talent of the squad comes first, then he can start building a more complex game.
Last Update: Dec 20, 2019 1:17 am
RELATED TOPICS