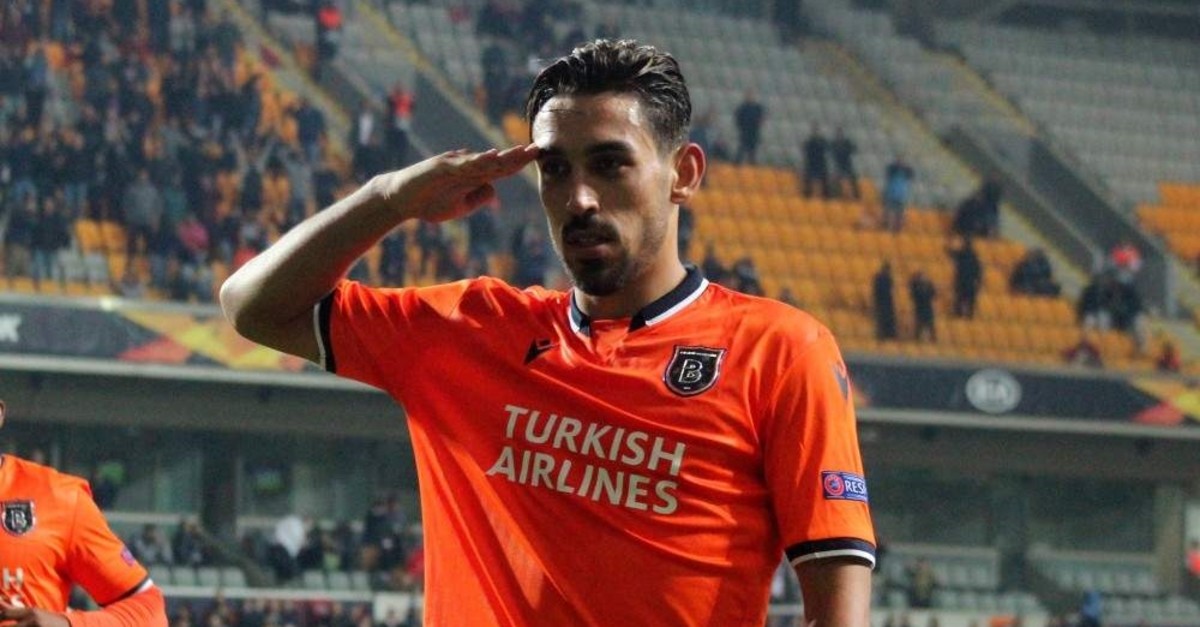 Medipol Başakşehir’s İrfan Can Kahveci has become the latest target of controversial UEFA proceedings over a military salute.
The Süper Lig side announced late Monday that the European football body has launched an investigation into Kahveci’s military salute after scoring a goal against Wolfsberger in a Europa League game in Istanbul on Oct. 24.
The military salute has become a common gesture for Turkish footballers and athletes after Turkey launched Operation Peace Spring in northern Syria earlier this month.


Players have often dedicated victories to the soldiers who fought in the counterterrorism operation. For UEFA, it is a political gesture and it launched another disciplinary probe on players making a military salute in a Euro 2020 qualifier between Turkey and Albania on Oct. 11 and between Turkey and France on Oct. 14.
Critics, however, blame the UEFA of pursuing politically motivated double standards over a simple patriotic gesture.
The criticism of the salute has laid bare hostilities toward Turkey when it comes to country’s fight against terrorism and Turkey has been critical of European countries’ stance against the operation under the pretext of defending an “ally” in its fight against Daesh in Syria.
Some German football clubs have taken action against players of Turkish origin who used the salute or “liked” posts about the salute on social media.
Enver Cenk Şahin was excluded from the squad of German second division club St. Pauli after showing support for the counterterrorism operation online while Furkan Aydın of Altona 93 had his contract terminated when he shared a post in support of Şahin.
Medipol Başakşehir Chairman Göksel Gümüşdağ told CNN Türk that they were “honored to make the military salute to convey the nation’s feelings for the righteous struggle of Turkey.”
“Griezmann did the military salute for [French President] Macron. Why wasn't there any probe against him?” he said.
France's star footballer Antoine Griezmann celebrated his goal with a soldier salute during the World Cup final in 2018. He greeted the French president with a military salute at a reception after winning the World Cup. However, Griezmann's actions were not perceived as a political message or provocative behavior. The footage of the moment was heavily covered by international media as a "nice gesture."
Gümüşdağ criticized these “double standards.” "I don’t know what would happen if we made a salute to our president. It is our right to salute our soldiers, our commanders and it is nobody’s business," he said. Gümüşdağ added that he did not expect a fine for Başakşehir and insisted it was not a political move. “We all get emotional when we see our flag when our national anthem is played. Our soldiers fight for a righteous cause and we will continue supporting our soldiers and Turkey’s commander-in-chief, Recep Tayyip Erdoğan,” he said.
Last Update: Dec 20, 2019 1:18 am
RELATED TOPICS