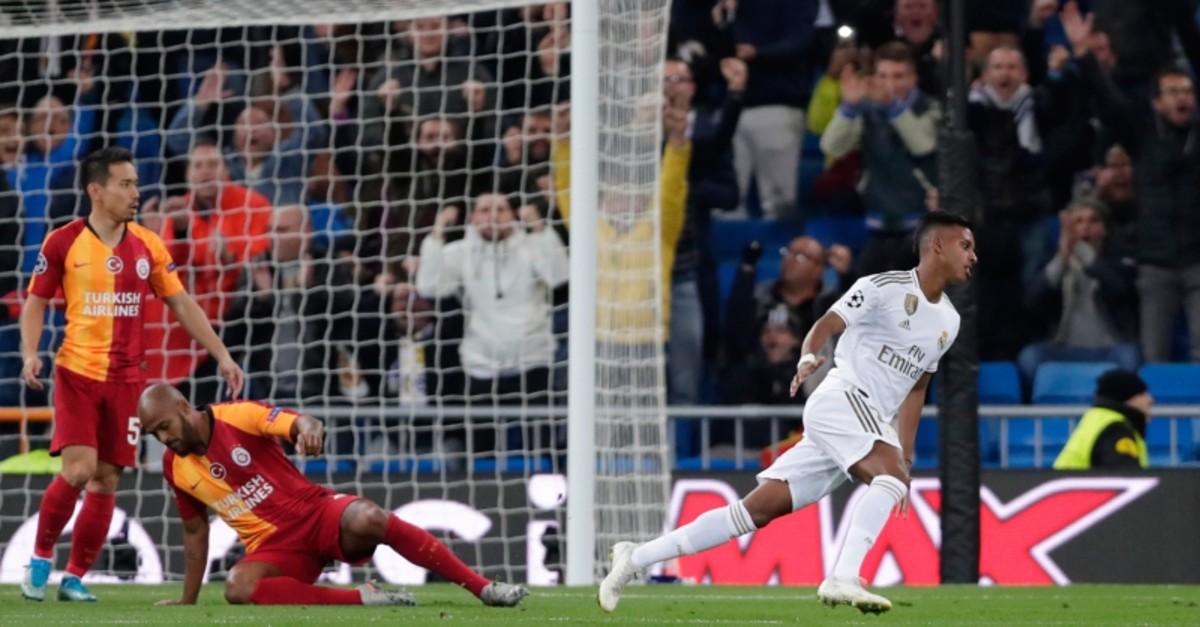 Real Madrid's Rodrygo, right, reacts after scoring the opening goal during a Champions League group A soccer match between Real Madrid and Galatasaray at the Santiago Bernabeu stadium in Madrid, Spain, Wednesday, Nov. 6, 2019. (AP Photo)
by Daily Sabah with AP Nov 07, 2019 10:25 am


It took less than 15 minutes for Real Madrid to erase fears of another setback at home as it put its Champions League campaign back on track. With three goals in the first 14 minutes, Madrid cruised to a 6-0 win over Galatasaray on Wednesday, moving closer to the knockout stages and ending the Turkish team's chances of advancing in the European competition.
Brazilian teenager Rodrygo had a dream Champions League debut at home, scoring the quickest brace in tournament history and his first hat trick with Madrid. Karim Benzema got a double to reach 50 Champions League goals with the Spanish club, surpassing Alfredo Di Stefano's tally.
Rodrygo scored twice in the opening seven minutes, and Sergio Ramos added the third from a penalty in the 14th to put Madrid on its way to a comfortable home victory. Benzema added the fourth just before halftime and scored again late in the second half, while Rodrygo sealed his hat trick in stoppage time.
"We can be happy with our performance today," Real Madrid coach Zinedine Zidane said. "Not only because of the six goals, but also because we kept a clean sheet. We played a complete match. We got the best version of all of our players."
The result ended Madrid's three-game winless streak at the Santiago Bernabéu Stadium in the Champions League, leaving the 13-time champion in good position in Group A after a winless start that had fans fearing the team's first group-stage elimination since the 1989-90 season.
Madrid has seven points, five more than third-place Club Brugge, which lost 1-0 to leader Paris Saint-Germain (PSG) in the group's other match. PSG remained perfect with 12 points - and has secured its spot in the knockout stages - while Galatasaray is last with one point.
Madrid had lost twice and drawn once in its previous three home games in the Champions League. It has never gone four matches in a row without a win at the Bernabéu in the European tournament.
Madrid's last Spanish league game at home also was a draw - 0-0 against Real Betis on Saturday. Madrid had opened its Champions League campaign with a 3-0 loss at PSG and a 2-2 draw against Club Brugge at home, then earned a 1-0 win at Galatasaray in the previous round. It needs two points from its last two matches to guarantee it will advance.
Galatasaray has only two wins in its last 24 Champions League games and is winless in nine straight. It hasn't won in 16 consecutive away matches in the European competition.
"It was really difficult after we started losing 3-0," Galatasaray coach Fatih Terim said. "Real Madrid was amazing tonight, we have to recognize that. But we made everything easier for them. We did not put up a fight. If we are going to lose, we at least have to put up a fight, and we did not do that."
Rodrygo got off to a fast start, scoring after a nice cutback move inside the area in the fourth minute and with a header in the seventh. Fellow Brazilian Marcelo, in his 100th game in UEFA club competitions, set up both goals by the 18-year-old forward before being substituted before halftime with an injury. Ramos scored the third from a penalty kick awarded by video review after a defender stepped on Toni Kroos' foot at the edge of the area. It took more than three minutes from the time of the tackle until Ramos' shot from the penalty spot.
Rodrygo, who has quickly become the preferred Brazilian teenager for Zidane instead of Vinícius Júnior, provided the pass for Benzema's 45th-minute goal from close range. The French striker found the net again with an easy strike in the 81st after a low cross by Dani Carvajal, then set up Rodrygo's hat trick in the final minutes, with the youngster scoring from inside the area.
"We are not surprised by what Rodrygo did," Zidane said. "We all know that he has great quality and he has been taking advantage of his chances."
Madrid hosts PSG, and Galatasaray welcomes Club Brugge on Nov. 26.
Coincidentally, Galatasaray's U-19 beat Spanish outfit's U-19 team on the same day. The 4-2 victory brought first points to the team in UEFA Youth League Group A match, bringing them to third place with three points at the end of four matches, one spot behind Real Madrid.