Başakşehir put Europa campaign back on track with win over Wolfsberger 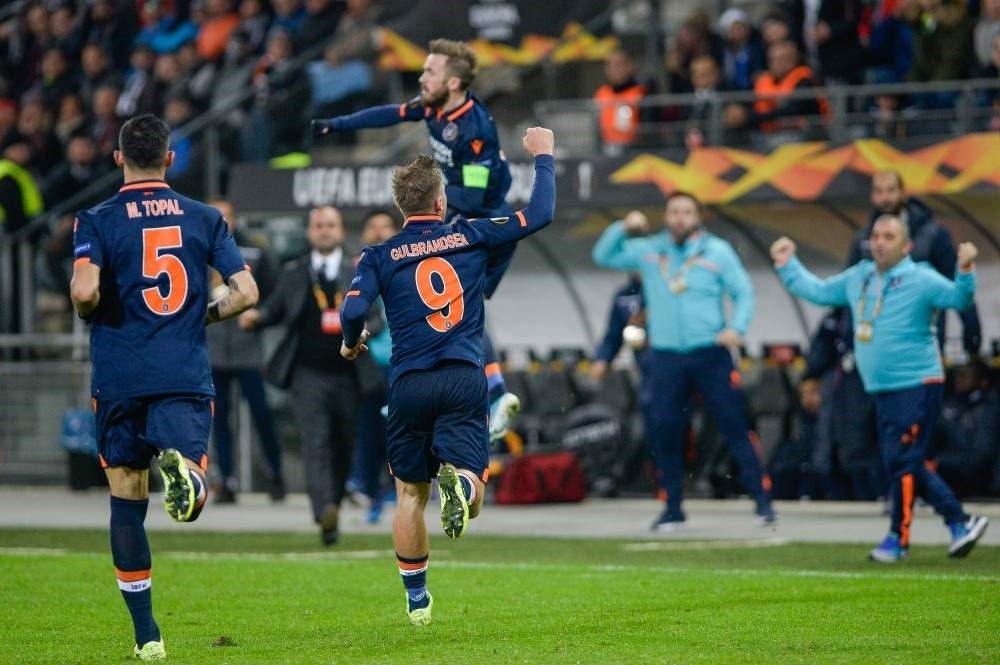 In an upsetting week for Turkish sides in Europe, Istanbul club Medipol Başakşehir provided some relief with a 3-0 away Europa League victory in Austria, raising hopes for additional country points in UEFA rankings crucial for clubs to be admitted to tournaments next season.

With Thursday's victory against Wolfsberger FC at Stadion Graz Liebenau, Başakşehir moved closer to the Round of 32 as it climbed to the top spot in Group J with seven points, two points ahead of Italian giant AS Roma and German Bundesliga leader Borussia Mönchengladbach.

Neither team was able to break the deadlock in the first half but in the second half, Bosnian midfielder Edin Visca scored from a penalty in the 73rd minute of the match, giving Başakşehir the lead. The penalty decision also left Wolfsberger with 10 men, as defender Nemanja Rnic was shown a red card.

Başakşehir coach Okan Buruk said that they won a very important away match and will continue their campaign as the group leader, thanking all players for their efforts.

In the other match of the group, Borussia Mönchengladbach defeated AS Roma 2-1 thanks to a goal by 22-year-old Marcus Thuram in the last minute of the match.

Two remaining matches on Nov. 28 and Dec. 12 will determine the two clubs that will proceed to the second round.

In another Europa League match on Thursday, Beşiktaş suffered its fourth defeat in Group K, losing 3-1 to Portuguese club SC Braga and getting eliminated from the tournament.

At Braga Municipal Stadium, Portuguese forward Paulinho's 14th-minute header from a corner kick gave his team the lead. The Black Eagles equalized 15 minutes later as U.S. striker Tyler Boyd managed to beat the keeper with a calm and collected finish, scoring his first goal for the Istanbul side.

Braga, however, reclaimed the lead in the 27th minute and once again it was Paulinho who put Beşiktaş's slim chances of surviving in the group at risk.

In the second half, the third goal came from Angolan forward Wilson Eduardo in the 81st minute for Braga, sealing the fate of the Istanbul club, which is also struggling in the league competition.

Braga maintained its leadership in the group with a point ahead of England's Wolverhampton Wanderers, which was also victorious on Thursday with a 1-0 win against Slovakia's Slavan Bratislava.
Wanderers missed a penalty and needed a late Raul Jimenez header to win at Molineux.

Black Sea club Trabzonspor also upset its fans Thursday after losing to Russia's Krasnodar 3-1 and got eliminated from the Europa League.

The Russian side found the opening goal at Krasnodar Stadium with Trabzonspor defender Serkan Asan's own goal in the 27th minute. In the 34th minute, former Beşiktaş midfielder Manuel Fernandes doubled his team's lead, and the first half ended 2-0.

In the second half, the Russian side got their third goal with 20-year-old Ivan Ignatyev in the 93rd minute. Trabzonspor's Nigerian striker Anthony Nwakaeme scored a consolation goal only a minute after Ignatyev's goal.

In the other Group C match, Swiss team Basel defeated Spain's Getafe 2-1 at St. Jakob-Park with Fabian Frei scoring the winner on the hour mark. Basel maintains a four-point lead in the top spot, guaranteeing a top-two finish.

In Thursday's other matches, Manchester United, Celtic and Sevilla all reached the knockout stages of the Europa League on Thursday, with Espanyol joining them thanks to a 6-0 rout of nine-man Ludogorets.

Belarusian side Ludogorets had Rafael Forster sent off in the 12th minute and Jacek Góralski followed in the 35th, giving Spain's Espanyol a clear path to qualify from Group H. Sevilla won 5-2 at Luxembourg champion Dudelange.

United had struggled to score in the Europa League with just two goals from its first three games but eased into the next round with its win over a hapless Partizan Belgrade side.

Marcus Rashford eluded five Partizan defenders to set up 18-year-old Mason Greenwood in the 21st minute, Anthony Martial profited from more sloppy defending in the 33rd and Rashford rifled in the third goal in the 49th.

Ole Gunnar Solskjaer's side maintained its grip on the game but couldn't take advantage of a number of additional chances it created.

United is the only team in this season’s Europa League not to have conceded a goal, even if it gave the first-choice goalkeeper David de Gea the day off on his 29th birthday.

United tops Group L with 10 points, two ahead of the Dutch side AZ Alkmaar, which routed Kazakhstan's Astana 5-0, with Partizan on four points and Astana bottom with none.

Celtic, European champions over a half-century ago, advanced from Group E as it fought back to clinch their first victory in Italy, with Frenchman Olivier Ntcham chipping oncoming goalkeeper Thomas Strakosha deep in stoppage time for the winner.

The French midfielder, who previously played for Lazio's Italian rival Genoa, lifted the ball over goalkeeper Thomas Strakosha after Odsonne Edouard capitalized on a mistake from Valon Berisha to set him up in the 95th minute.

The goal set off wild celebrations among an estimated 9,000 Celtic fans attending the game at Rome's Stadio Olimpico.

Police said two traveling fans had been stabbed by Lazio supporters before the game, following a brawl outside a pub, and that five Lazio fans were stopped for possession of dangerous materials such as baseball bats and knives.

With just three points from its opening three games, Lazio needed a win to have any realistic hopes of progressing. The home side took a seventh-minute lead through Ciro Immobile before pushing for more.

But James Forrest equalized with Celtic's first attempt in the 38th and Ntcham's late lob all but ended Lazio's prospects of advancing from Group E.

"This team keeps setting new boundaries for itself," said ecstatic manager Neil Lennon. "It’s a historic night and to come here and be as good as that and to have qualified after four games is unheard of for Celtic in Europe."

With two games remaining, Celtic leads with 10 points, one ahead of Romanian side Cluj, which beat French club Rennes 1-0, and seven ahead of Lazio. Rennes has one point.

Five-time champion Sevilla, which claimed three successive Europa League titles between 2014-2016, raced into a four-goal lead in the first 36 minutes. A hat-trick for Sevilla's Munir El Haddadi was supplemented by two goals from Munas Dabbur in a 5-2 away drubbing of Luxembourg’s Dudelange as the Spaniards kept up their 100% record in Group A.

Filip Kostic could have put the German side into the knockout stages when he only had the goalkeeper to beat in injury time, but Kostic missed the chance seconds before Lestienne claimed the winner at the other end.

Arsenal, which conceded an injury-time equalizer to draw 1-1 with Vitória in Portugal, tops the group on 10 points, followed by Liège and Frankfurt both with six, then Vitória on one.

PSV Eindhoven, the 1978 winners, missed the chance to put their poor domestic form behind them and also qualify for the last-32 as it let an early lead slip at LASK Linz and eventually lost 4-1.

Sporting now tops Group D after a 2-0 win at hapless Rosenborg to reach nine points, two more than LASK and PSV. The Norwegians have lost all four of their group games.

Rangers scored twice in four second-half minutes through Alfredo Morelos and Steven Davis to beat Porto 2-0 at Ibrox in Group G, where it is in second place but level on seven points with Swiss champions Young Boys.

Ghent's 3-1 upset win at VfL Wolfsburg saw the Belgian side go top in Group I.

In the Round of 32, the top two in each of the 12 Europa League groups will be joined by eight teams dropping out of the Champions League.