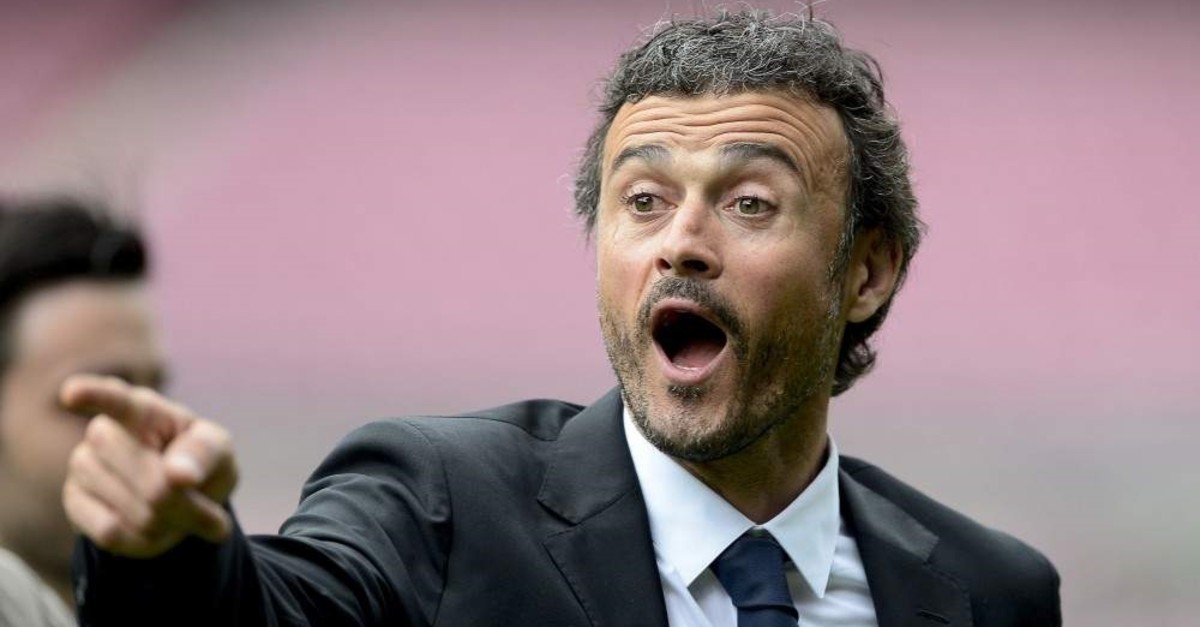 Luis Enrique gestures during his presentation at the Camp Nou stadium in Barcelona, May 21, 2014. (AFP Photo)
by Compiled from Wire Services Nov 19, 2019 2:44 pm
Luis Enrique will return as coach of Spain and replace Robert Moreno ahead of Euro 2020, the Spanish Football Federation (RFEF) confirmed Tuesday.
Moreno took charge in June after Luis Enrique had resigned to take care of his daughter Xana, who died in August of bone cancer aged nine.
"Today we can confirm Luis Enrique returns to his position of work," RFEF President Luis Rubiales said in a news conference at the national team's training base in Las Rozas.
Reports of Enrique's imminent return emerged late Monday as Spain cruised into the Euro 2020 finals by winning its last two matches 12-0 on aggregate, securing the top spot and seeding for the tournament.
"Spain cannot be a circus" read Marca's front page after a bizarre Monday night in Madrid following the 5-0 victory over Romania.
Marca, among others, reported that Moreno had said a tearful goodbye to the players in the locker room at the end of the match and then headed home.
Rubiales was heavily criticized on Tuesday for his handling of the matter.
Spain made a spectacle of themselves in 2018 when it sacked Julen Lopetegui on the eve of the 2018 World Cup because he had negotiated his departure from the job so that he could take over as Real Madrid coach after the tournament.
Luis Enrique coached in seven games since taking over and won five of them. Moreno, who was his assistant before tragedy struck, came in and changed very little. His record was played nine, won seven and with a very impressive plus 25 goal difference.
What perplexed most reporters who follow the Spain team on Tuesday was the apparent contradiction between Luis Enrique returning to his job and his friend and former assistant Moreno apparently being upset at no longer being the number one.
Moreno had said on various occasions that he would welcome Luis Enrique's return.
Former coach and Luis Enrique biographer Lluis Lainz told Marca on Tuesday that Luis Enrique had personally requested to Rubiales that Moreno not be his number two.
Last Update: Dec 20, 2019 1:47 am
RELATED TOPICS