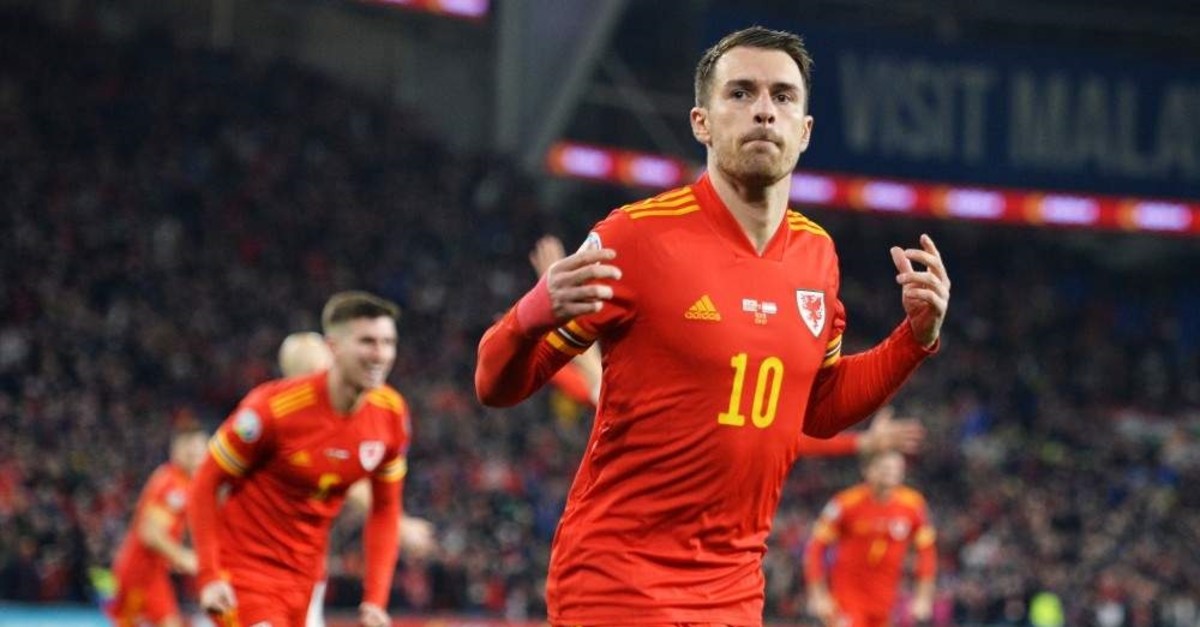 Ramsey celebrates after scoring two goals during the qualification match between Wales and Hungary in Cardiff, Nov. 19, 2019. (EPA)
by Compiled from Wire Services Nov 20, 2019 9:17 am

Wales reached their second straight European Championship finals after a goal in each half by midfielder Aaron Ramsey gave them a 2-0 home win over Hungary in their decisive Group E qualifier on Tuesday.

The Welsh, who reached the Euro 2016 semi-finals, finished runners-up on 14 points from eight games, three behind Croatia who sealed their berth on Saturday with a 3-1 win over Slovakia.

Having previously gone 58 years without reaching a major tournament after the 1958 World Cup, there were joyous scenes at the Cardiff City Stadium as Wales produced a dominant display to wrap up qualification.

The outcome was a triumph for manager Ryan Giggs, who never kicked a ball at a World Cup or European Championship as a player but can now revel in guiding his country to Euro 2020 after taking over from Chris Coleman in January 2018.

"It doesn't get any better, it's amazing," Giggs was quoted as saying by the BBC.

"From where we were in the summer, all credit to the lads for coming back. One of the best days of my life."

On the final night of qualifying, top-ranked Belgium completed a perfect campaign in Group I by thrashing Cyprus 6-1 for a 10th straight win.

Christian Benteke and Kevin De Bruyne both scored twice, with Yannick Carrasco also on the score sheet and Christoforou Kypros scoring an own goal.

Russia beat San Marino 5-0 and finished second, with its only losses coming against Belgium.

Germany and the Netherlands were already assured of advancing from Group C and they both finished with big home wins.

Serge Gnabry scored a hat trick and Leon Goretzka added two more for Germany in its 6-1 win over Northern Ireland in Frankfurt.

Georginio Wijnaldum, standing in as captain, also scored three goals in the Netherlands’ 5-0 victory over Estonia.

Germany topped the group, two points ahead of the Dutch.