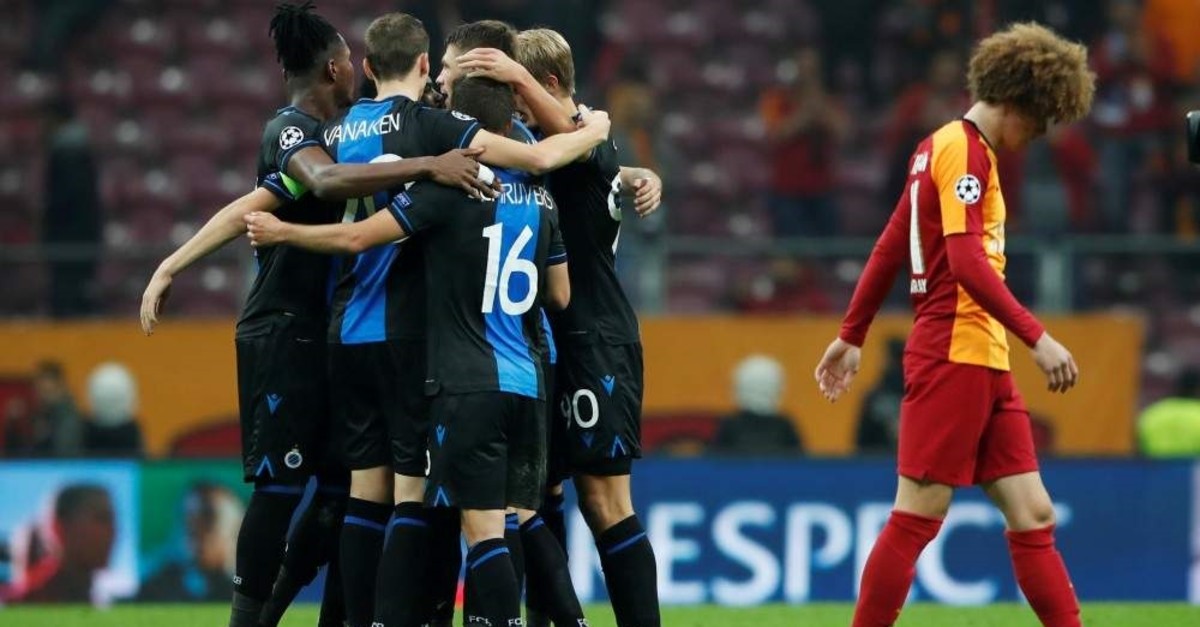 Club Brugge players celebrate after the match while Galatasaray's Erencan Yardu0131mcu0131 walks away, Istanbul, Nov. 26, 2019. (Reuters Photo)
by Daily Sabah with Wires Nov 26, 2019 11:44 pm
Istanbul giant Galatasaray's hopes for booking a ticket to UEFA Europa League were dimmed after Krepin Diatta scored a stoppage time equalizer to give Club Brugge a 1-1 draw in their Champions League Group A clash on Tuesday.

Adem Büyük scored Galatasaray’s first Champions League goal this season 11 minutes into the first half and the Turkish side looked poised for its maiden win in the group until Diatta scored deep in stoppage time with a shot into the far corner.

The 20-year-old forward was given his second booking after he took off his shirt in celebration and the visitors were reduced to nine men seconds later when Clinton Mata was also sent off for breaking a corner flag.

Because of a plethora of injuries, Galatasaray coach Fatih Terim had to field a makeshift team combining youth and experience, but the hosts still dominated in the early stages. Brugge was the better team after the interval, though, and kept pushing until it secured the equalizer.

Galatasaray took the lead when Büyük connected with a cross from Bayram in the area to score his first goal in all competitions since August. With his back to the goal, Büyük made the most of Simon Deli’s slack defending to create some space and volley the ball into the back of the net.

Brugge had a couple of good chances near the end of the first half through forward Lois Openda and captain Hans Vanaken but too often lacked a cutting edge.

The visitors kept pushing forward after the interval and substitute David Okereke wasted an opportunity to level with 10 minutes left, missing the target from close range in front of an open goal.

With both teams now unable to finish in the top two in Group A, the result secured a spot for Real Madrid in the round of 16. Paris Saint Germain (PSG) will clinch first place if the French champions avoid defeat in Madrid in the group’s other game.
Galatasaray finish Group A away at PSG while the Belgians host Real also on Dec. 11. A third place finish would ensure passage to the knockout stage of the second tier Europa League.
In the other early kickoff on Tuesday, Bayer Leverkusen kept alive their chances of reaching the last 16 thanks to a 2-0 win away to Lokomotiv Moscow in Russia.
An unfortunate Rifat Zhemaletdinov own goal in the first half and then a fine Sven Bender volley in the 54th minute gave Leverkusen the victory.
The Bundesliga side are now just a point behind Atletico Madrid in Group D, but the Spaniards can seal qualification for the last 16 with a game to spare if they defeat Juventus in Turin later on Tuesday.
Juventus has already qualified but a win will allow them to guarantee progress as group winners.
Last Update: Dec 20, 2019 1:57 am
RELATED TOPICS