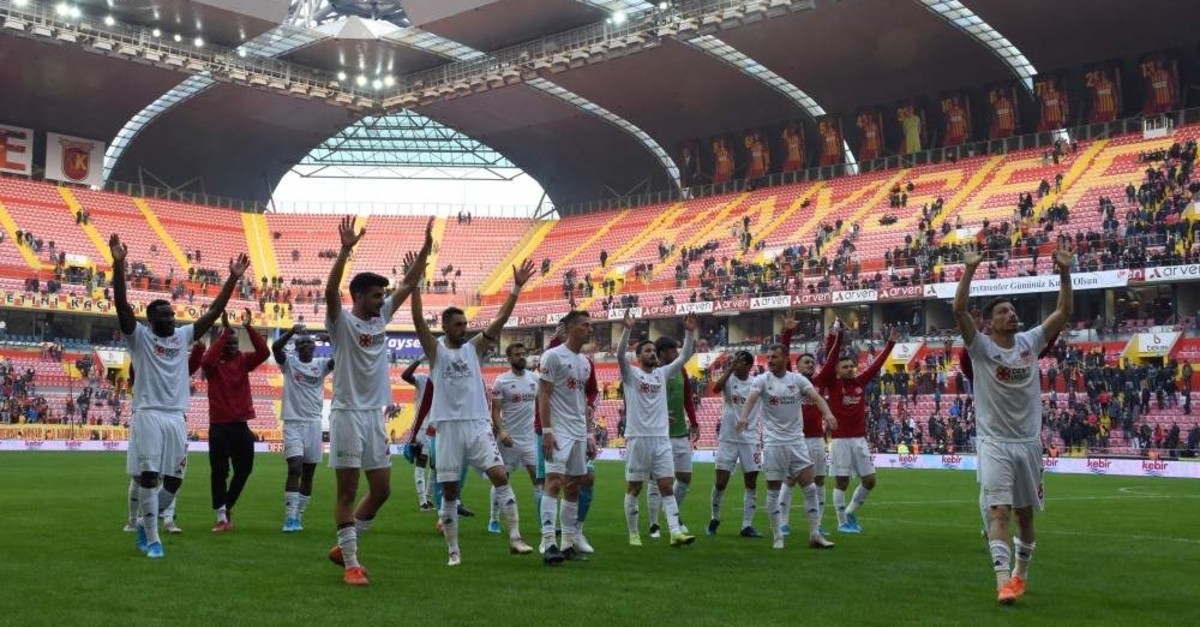 Demir Grup Sivasspor, an Anatolian team challenging the “big three” of Turkish football, dominated Week 12 in the Süper Lig, sparking hopes among fans that they will finish the first half of the season on top

It is too early to be declaring a champion, but Demir Grup Sivasspor has followed the lead of Aytemiz Alanyaspor in a thrilling Süper Lig season so far. Dethroning the minnows from the Mediterranean region of Turkey, the team from the Anatolian heartland is clinging to the top spot in Week 12. A 4-1 win against İstikbal Mobilya Kayserispor has helped the Yiğidos stay at the top for two consecutive weeks now.
Their successful performance has instilled hope in fans, who dream of seeing them in the championship race after last being competitive a decade ago in the 2007-08 and 2008-09 seasons. If they add to their 24 points, Sivasspor may very well conclude the first half of the season as the league leader in January, as it did 10 years ago.
Sivasspor is relatively new to the Süper Lig, which has long been dominated by powerhouses Beşiktaş, Galatasaray and Fenerbahçe. As the big three stalled, they found a chance to prove their mettle to compete with the best, under coach Rıza Çalımbay, the former legendary player of Beşiktaş. Since their foray into the top flight league in the 2005-06 season, they have maintained a steady performance and were a mid-table team through most of the past years.
Çalımbay, a native of Sivas, won the hearts of fans with unprecedented success this season, racking up seven wins, three draws and two defeats in 12 weeks. This is indeed their best performance as of Week 12 in the past 11 seasons. The last time they tallied more points was way back in the 2007-08 season when they were at 28 points.
The team is on a run of five straight wins and has scored 16 goals to surpass Trabzonspor and Medipol Başakşehir by two points.
“We missed the top title narrowly 10 years ago but we will return to the good old days,” said Sadettin Şanlı, leader of Sivasspor’s fervent fan group Çılgınlar 58.
“Sivas needs to get into the mood for a championship. The whole city should support our team while we are still the league leaders,” he told Anadolu Agency on Tuesday. “We want to compete in European competitions but we can win the Süper Lig title."
Though Galatasaray and Beşiktaş maintained good form in the first weeks, it is the teams outside the Istanbul-centered football hub that have left their marks in the Süper Lig this season. For 10 weeks, Anatolia’s teams set the pace while last season’s ailing Fenerbahçe only kept the top spot for two weeks. Aytemiz Alanyaspor from the eponymous Mediterranean town dominated the league for eight weeks.
Last season’s champion Galatasaray, meanwhile, has failed to crack the top five so far and only secured its first win in Week Three. It currently sits in the eighth spot with 19 points.
This is indeed a season for smaller clubs. BtcTurk Yeni Malatyaspor leads the league as the top-scoring team, with 25 goals in 12 weeks, with an average of 2.1 goals per match while conceding only 12 goals. Sivasspor follows them with 24 goals while Trabzonspor has scored 23. Malatyaspor’s Adis Jahovic, Alanyaspor’s Papiss Cisse share the top scorer title with nine goals each. They are followed by Trabzonspor’s Alexander Sörloth, Medipol Başakşehir’s Enzo Crivelli and Fenerbahçe’s Vedat Muriqi with seven goals each.
Last Update: Dec 20, 2019 1:57 am
RELATED TOPICS