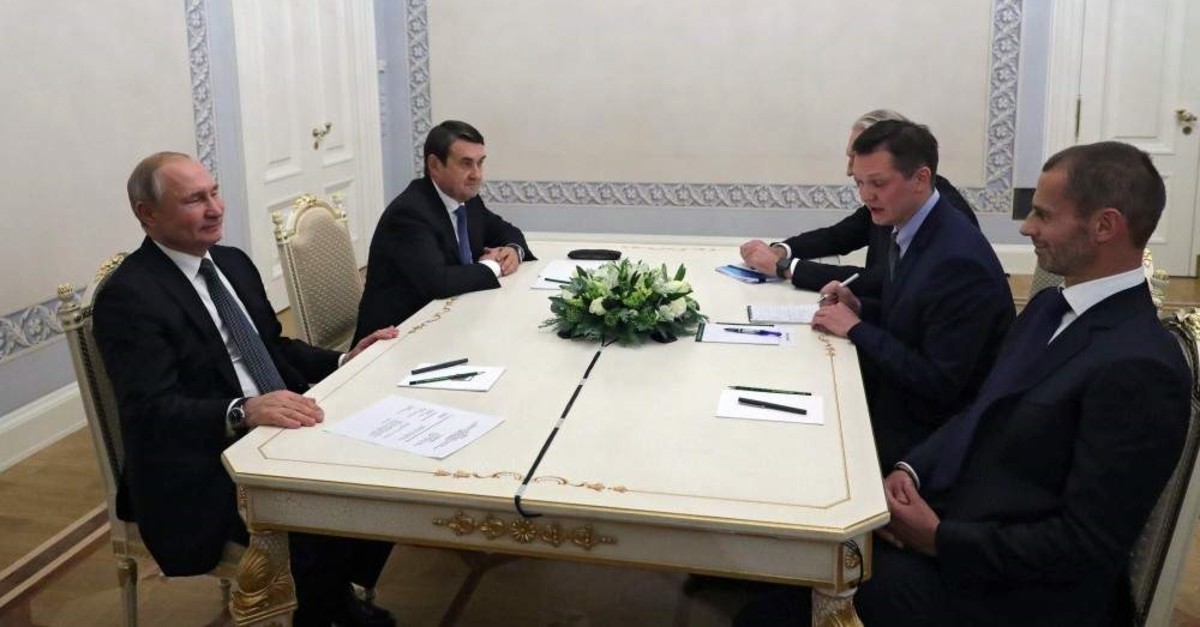 WADA’s compliance review committee has proposed banning Russia from hosting “major events” as part of a package of sanctions for Russia over alleged tampering with doping records. WADA’s executive board will vote on the recommendation Dec. 9.

“As regards UEFA, the Euros is not a multi-sport major event or a world championship but rather a regional/continental single-sport event,” WADA spokesman James Fitzgerald told The Associated Press by email.

“So it is not affected by this recommendation.”

Putin discussed European Championship hosting plans with Ceferin ahead of a Champions League game in the city.

“We will do everything so as not to let down you, the fans, the players,” Putin said, in comments reported by the TASS state news agency.

There was no immediate word on whether they discussed the doping issue.

The European Championship mean St. Petersburg will be hosting a major international event for the third time in four years after the 2017 Confederations Cup and 2018 World Cup.

Incoming WADA president Witold Banka, who takes office Jan. 1, agreed with Fitzgerald’s assessment that the Euros shouldn’t be part of any sanctions, and expressed shock at Russia’s behavior.

“The report is truly frightening because, in fact, a manipulation has taken place, some of the data has been removed,” Banka told Polish radio station RMF FM.

“Russia had a state system of supporting doping and manipulating data. WADA forensic experts have proven that, at the time when Russia was offered a chance to cleanse the situation, a manipulation took place.”

The European Championships are widely expected to be the second most-watched sporting event in the world next year after the Olympics in Tokyo, based on TV viewing.

Research into the 2016 tournament found that the final attracted 284.4 million as an “average in-home global audience” – the industry-standard audit tracking viewers minute-by-minute – and that 600 million viewers watched at least some of Portugal’s 1-0 win over France.

UEFA is not a signatory to the World Anti-Doping Code, but Europe’s football governing body is a subsidiary of FIFA, which has signed up to the code. UEFA also runs its own anti-doping program.

Russia is accused of altering lab data to remove positive tests, at a time when the data was held by Russian law enforcement. Handing over the data was meant to clear up past cover-ups and smooth Russia’s way back into global sports after years of doping scandals.

The WADA committee has proposed a package of sanctions including a four-year ban on hosting major events in Russia and a similar four-year sanction on Russians competing in top events like the Olympics, though they could enter as neutrals.

Putin’s spokesman Dmitry Peskov said Wednesday the recommendation is “unpleasant for us,” but it would wait for them to be confirmed by WADA.

“The Russian sports authorities have always been and will be fully open for cooperation with the international sports community and WADA. A detailed explanation has been given on the questions that have been asked.”