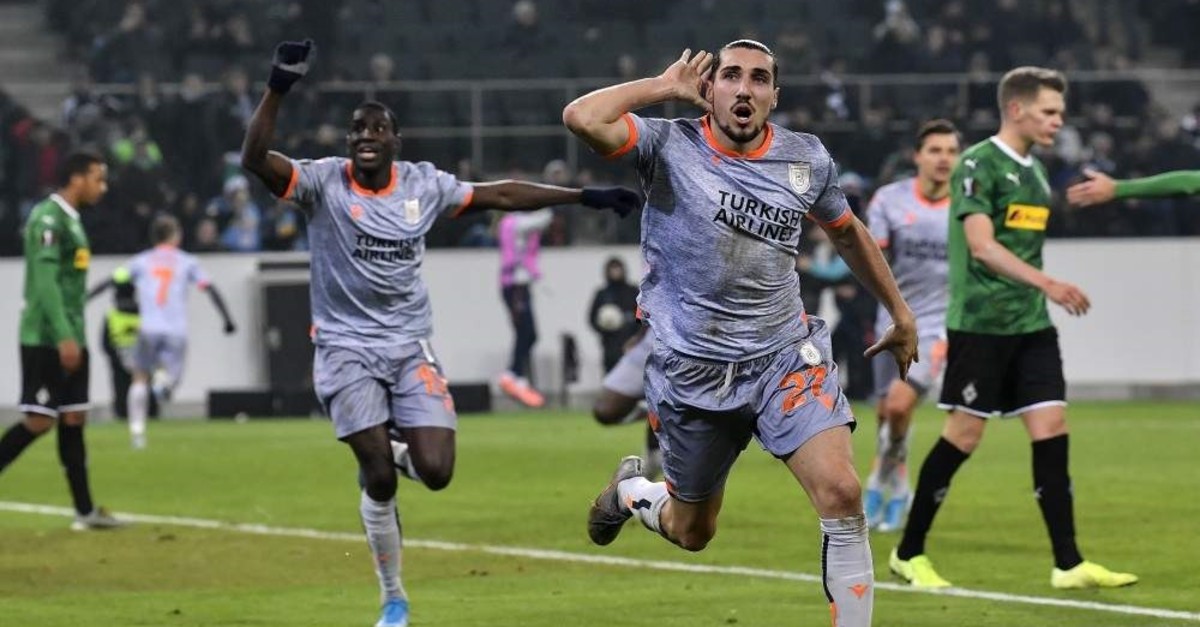 Medipol Başakşehir made history in a dramatic fashion Thursday night after defeating Borussia Mönchengladbach 2-1 at Borussia-Park with a last minute goal, advancing to the UEFA Europa League's Round of 32 for the first time and knocking the German side from first to third in Group J and then out of the competition.

Marcus Thuram had given the Germans a 33rd-minute lead only for İrfan Can Kahveci to reply before half time and equalize the score. The upset of the night, however, came in the last minutes of the game as Başakşehir’s Enzo Crivelli scored at the 91st-minute mark.

Sitting at the top of the group prior to the match with eight points, Mönchengladbach was knocked out of the competition as Başakşehir snatched the lead with 10 points and AS Roma claimed the second spot with 9 points after a 2-2 draw with Wolfsberg.

AS Roma’s Diego Perotti tucked home from the penalty spot to break the deadlock, but Alessandro Florenzi's own goal leveled the score. Edin Dzeko restored AS Roma's lead but Shon Weissman equalized with a diving header.

Speaking to the press after the game, Başakşehir coach Okan Buruk said they were ecstatic for making history by defeating a formidable opponent. “I want to reiterate that we played against a very good team. The leader of the German Bundesliga has a team that does all it can from the first minute until the end,” Buruk said as he praised their opponents for the game.

“Just as I said before, our only option was to win. We could not start the game as we had hoped, especially after conceding the first goal, but we managed to equalize before the first half was over. I would like to think we were the better side during the second half,” Buruk said. He added that the Başakşehir’s advancement also served Turkey in UEFA’s country coefficients, which determined how many teams from a nation can attend UEFA’s Europea League and Champions League competitions.

For his part, Mönchengladbach manager Marco Rose said he believed his players dominated the game and avoided commenting on Başakşehir’s play. “We missed our chances and we conceded a goal at the last minute, but that’s football. We wanted to continue in the Europa League, but we will manage to pick ourselves up. I don’t want to comment on Başakşehir. They won,” Rose said.

Başakşehir’s scorer Kahveci said he wished other Turkish teams had managed to advance as well. “We hope we will achieve similar success regularly from now on. We will focus on our next games, and we hope to advance as far as we can,” he said. Kahveci also said no one gave Başakşehir a chance against the Bundesliga leaders, but they proved everyone wrong.

The star of the night, Crivelli, said the morale boost the team received after the match was sure to carry on. “We have three more games (before the Turkish Süper Lig break), that we need to keep our focus on. It was an important victory that boosted the morale and confidence of the team. We will carry this on to our matches in Süper Lig,” Crivelli said.

While Başakşehir was riding high on victory, the other Turkish teams competing in the tournament were sent packing with defeats. Istanbul powerhouse Beşiktaş was hammered at the Molineux Stadium by Wolverhampton with a 4-0 thrashing. After the game, the Black Eagles finished the group at the bottom with one win and five defeats.

Trabzonspor was not spared either. The Black Sea giants, who already lost the chance to advance prior to the game, said farewell to its European campaign with a 2-0 defeat against Basel. With the defeat, Trabzonspor also ended the group at the bottom with only a single point.