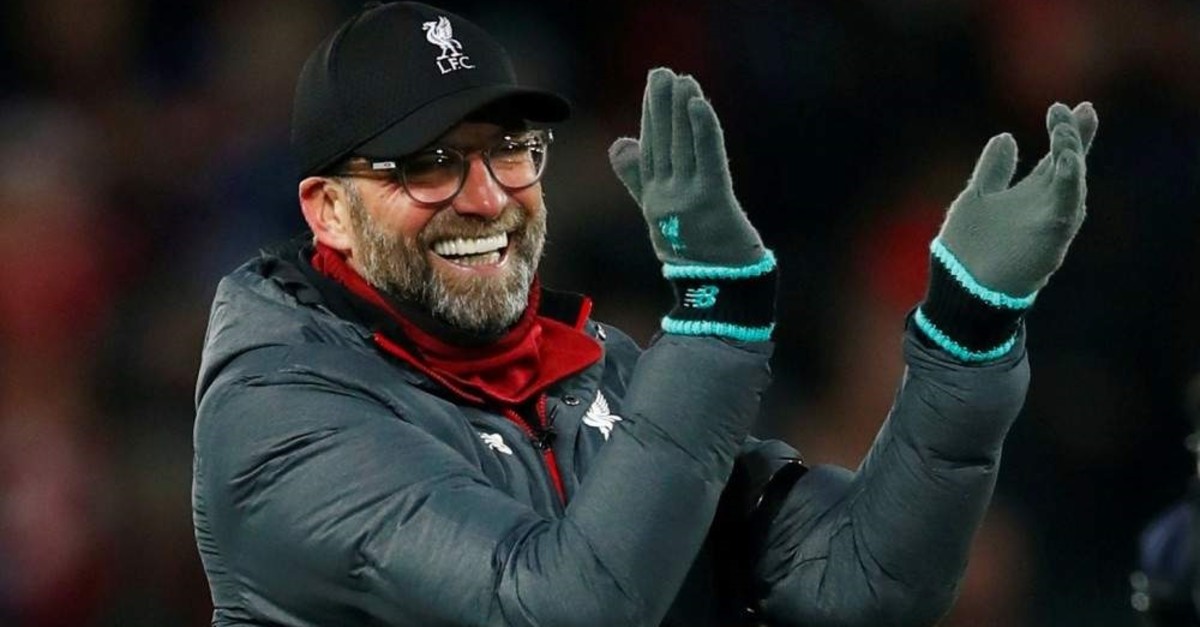 Liverpool manager Juergen Klopp celebrates after the match against Brighton & Hove Albion, Liverpool, Nov. 30, 2019. (REUTERS Photo)
by Dec 13, 2019 6:11 pm
Liverpool manager Juergen Klopp has agreed a contract extension until 2024, the Premier League club announced on Friday.
Former Borussia Dortmund manager Klopp took the reins at Liverpool in October 2015 and guided them to back-to-back Champions League finals in 2018 and 2019, winning their sixth European cup last season.
"For me personally this is a statement of intent, one which is built on my knowledge of what we as a partnership have achieved so far and what is still there for us to achieve," Klopp said in a statement on the club's website.
"When the call (to manage Liverpool) came in autumn 2015, I felt we were perfect for each other. If anything, now I feel I underestimated that.
"It is only with a total belief that the collaboration remains totally complementary on both sides that I am able to make this commitment to 2024."
Klopp took Liverpool to the brink of their first ever Premier League title last season, finishing a point behind champions Manchester City.
They are well poised to end their 30-year wait for a top flight league title after going unbeaten in the first 16 games this season, with an eight-point lead over second-placed Leicester City.
Klopp's assistants Peter Krawietz and Pep Lijnders have also agreed new deals.
The charismatic 52-year-old took over when the club were struggling for form under Brendan Rodgers and had fallen to the 10th in the table. He guided them back to the Champions League in his first full season.
Klopp's high-intensity, counter-pressing style transformed Liverpool into fearful opponents and the team are currently on their longest-ever unbeaten league run of 33 matches.
Klopp shaped the team in his image with astute signings, including forwards Sadio Mane in 2016 and Mohamed Salah a year later -- both of whom top scored in the league last season.
The German boss then strengthened at the back by selling midfielder Philippe Coutinho to Barcelona in 2018 and using the funds to sign center back Virgil van Dijk, before bringing in goalkeeper Alisson Becker.
All four of those recruits finished among the top 10 for the Ballon d'Or this year, with Van Dijk second behind Barcelona's Lionel Messi.
Klopp also nurtured academy graduate Trent Alexander-Arnold and fellow full back Andy Robertson, who joined for eight million pounds ($10 million) in 2017.
The duo combined for 23 assists in the league last season and were both named in the Premier League team of the year.