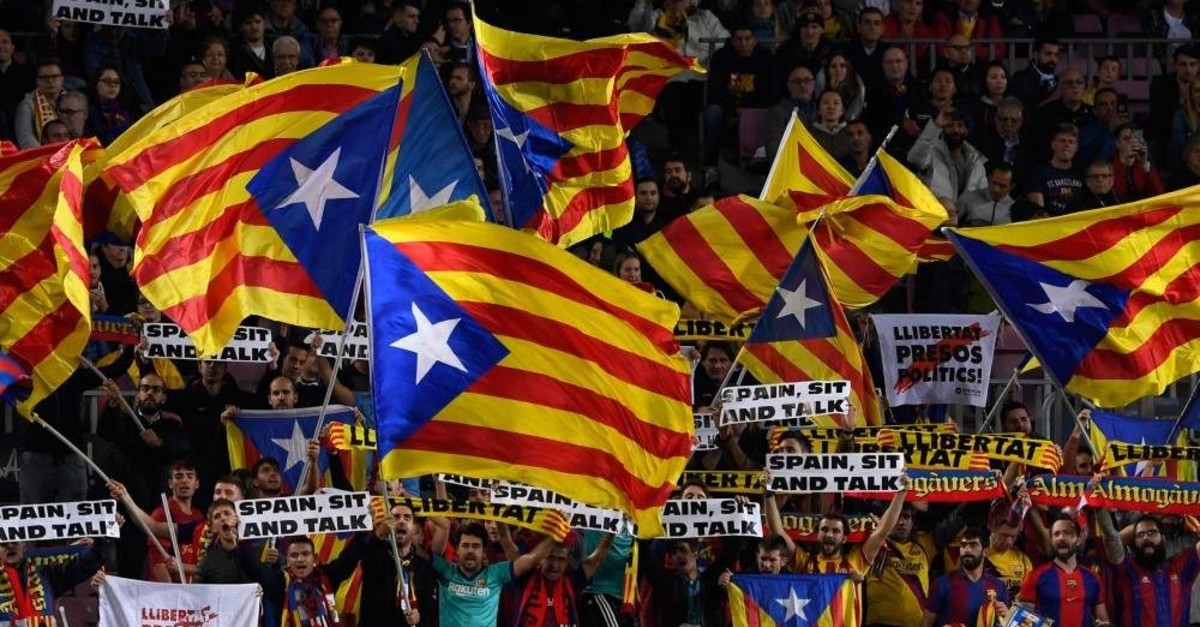 Real Madrid and Barcelona square off Wednesday for a La Liga derby, but the already delayed match has been overshadowed by the threat of Catalan separatists' political protests

This "Clásico” promises to be like none other. Unfortunately, it may not be for the goals scored by Lionel Messi’s Barcelona or Karim Benzema's Real Madrid. Catalan separatists are planning to gather in large numbers around Camp Nou and possibly carry out protests inside Barcelona’s stadium on Wednesday when Real Madrid comes to play in one of the most-watched matches of the season. More than 25,000 protesters have agreed to gather outside Camp Nou, according to the online separatist platform Tsunami Democratic. The group says there will also be protesters among the spectators at the 99,000-seat stadium.
Police have prepared a 3,000-strong special detail involving police and private security staff to try to ensure that the team buses can arrive on time and that nothing interrupts the match. The match was already postponed from its original date on Oct. 26 because of fears that separatists, then in the midst of a week of violent protests, would disrupt the game. The clubs are level at the top of the Spanish standings ahead of the game after a weekend in which both were held to draws. Barcelona was held 2-2 at Real Sociedad on Saturday, and Madrid needed a last-gasp goal by Benzema to draw 1-1 at Valencia on Sunday.
Besides several thrilling showdowns between the powerhouse clubs, this century has seen some highly charged clásicos in Barcelona that have gotten out of control. The most outlandish was former Barcelona star Luis Figo’s return in a Madrid kit in 2000. The Portugal forward was welcomed by a showering of trash, including a pig's head, being flung at him by his spurned former fans. A close second place goes to ex-Madrid manager Jose Mourinho poking then-Barcelona assistant Tito Vilanova in the eye during a mass brawl between the teams in 2011.
Barcelona hasn’t lost a game to Madrid in six consecutive league meetings, while Madrid’s last win at Camp Nou in the league was in April 2014. Last season, Barcelona routed Madrid 5-1 without the injured Messi. Madrid then drew 1-1 at Barcelona in the Copa del Rey, only to lose 3-0 in the second leg at home.
Barcelona spent 120 million euros ($134 million) this summer to trigger the escape clause in Antoine Griezmann’s contract with Atlético Madrid in the hope of finding a third world-class scoring talent after Philippe Coutinho failed to fit the bill. Just in time for Madrid, Griezmann has found his scoring form after struggling to adapt to his new role at Barcelona in the opening months of the season. The French World Cup winner has scored three times in his last five games and has tallied seven goals on the campaign. Equally as important, he is clicking well with Messi and Luis Suárez, with all three combining for 33 goals. Griezmann scored in Saturday's draw at former club Sociedad. "It was always nice to watch the clásicos on television, and now I can fulfill the dream of playing in one,” Griezmann said on Sunday. Messi will be looking to increase his clásico record of 26 goals.
Benzema will be the No. 1 threat for Madrid. The French striker leads Madrid with 16 goals in all competitions this season and leads the Spanish league along with Messi with 12 strikes. Who will accompany Benzema in Madrid’s frontline is more of a mystery. With Eden Hazard most likely unavailable because of a leg injury, Zidane could align Gareth Bale, Francisco "Isco” Alarcón, Lucas Vázquez or Brazilian youngsters Rodrygo and Vinicius Junior.
Last Update: Dec 20, 2019 2:27 am
RELATED TOPICS