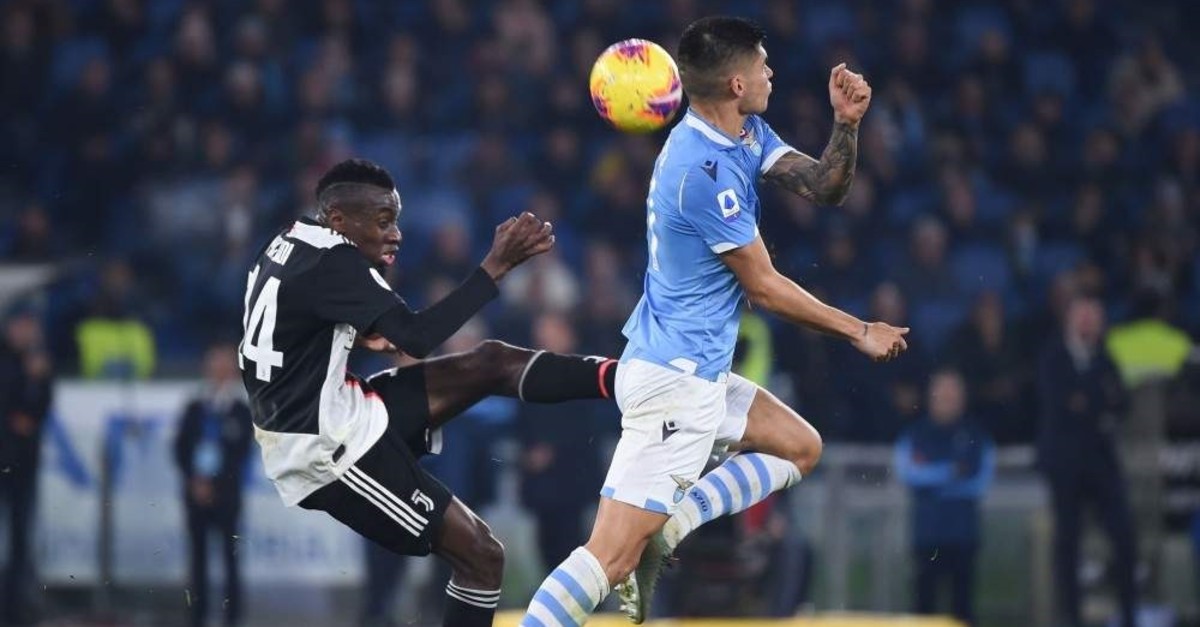 Juventus' Blaise Matuidi (L) and Lazio's Joaquin Correa go for the ball during the Italian Serie A football match, Rome, Dec. 7, 2019. (AFP Photo)
by Dec 20, 2019 6:38 pm
The Italian Super Cup match between Juventus and Lazio in Saudi Arabia on Sunday is again sparking controversy about the poor human rights record of the kingdom, which is hosting the event for a second successive time.
The latest appeal not to play in the Saudi capital of Riyadh came this week from Hatice Cengiz, fiancee of murdered Saudi journalist Jamal Khashoggi. The dissident writer was killed in October 2018 inside the Saudi embassy of Istanbul, where he had entered to obtain documents needed to marry Cengiz, who was waiting outside the building. Cengiz was in Rome on Tuesday and spoke at the Foreign Press Association in Rome after addressing the human rights committee of the Italian Senate. "I don't follow football usually, but I know what you Italians think about it, and we have Turkish teams too," she told journalists. "I am really confused about the situation of two Italian teams playing in Saudi Arabia. I understand that there has been an invitation and there is an economic side to this," she stated, continuing: "I also understand that it is not possible to boycott the match, as everything is already scheduled, but don't you see that this is being used politically, to promote the country through football, something that you truly love? It is a very specific question, and this is how I feel. I am heartbroken that this is happening."
A report from the United Nations Human Rights Commissioner said in June that Khashoggi "was the victim of a premeditated extrajudicial execution, for which the State of Saudi Arabia is responsible." Criticism had already preceded the Super Cup 2018 match played last January, three and a half months after Khashoggi's killing, between Juventus and AC Milan in the Saudi town of Jeddah. USIGRai, the journalists' union of public broadcaster Rai, and Amnesty International staged a sit-in outside the Saudi Arabia embassy in Rome on the matchday, protesting against the country's involvement in the civil war raging in bordering Yemen, its record of violence against dissidents and discrimination toward women. As not much appears to have changed in the Middle East country, the two organizations wrote a letter to league champions Juventus and Italian Cup winners Lazio in September, exhorting them not to play the match, which Amnesty has called Saudi Arabia's attempt to "sport-wash" its human rights record. Amnesty spokesperson Riccardo Noury told dpa that no official reply came from the clubs.
Luigi De Siervo, the director-general of the Lega Serie A, was quoted by Italian media as saying that, given an existing contract with Saudi's sports authorities, "only the clubs, Juventus and Lazio in this case, can bring on arguments to not respect the deal." The Lega is said to have signed an agreement in 2018 to play three Super Cup games in Saudi Arabia in five years, receiving about 7 million euros ($7.8 million) in each occasion. Amnesty and USIGRai also noted that, with two games left to play in four years, relocating the December game should not represent a breach of contract.
Saudi Arabia has also secured a three-year deal to host the Spanish Super Cup, which will be held for the first time in a four-team format in January. It staged the world heavyweight championship bout between Andy Ruiz Jr. and Anthony Joshua earlier this month in Diriyah amid similar criticism of "sport-washing" from human rights groups. On Sunday, good news should come from access granted to women in all stadium sectors at Riyadh's King Saud University Stadium. They had to be accompanied by a man to watch the January fixture.
The two sides arrive in the Arabian peninsula in good form, Lazio having won their last eight league games, including a 3-1 defeat of Juve. The Bianconeri, who top the league standings, hope to avenge the Dec. 7 loss, their first this season, and the 3-2 edging of the 2017 Super Cup, when Lazio clinched their fourth trophy. Juve have won twice as many.
RELATED TOPICS