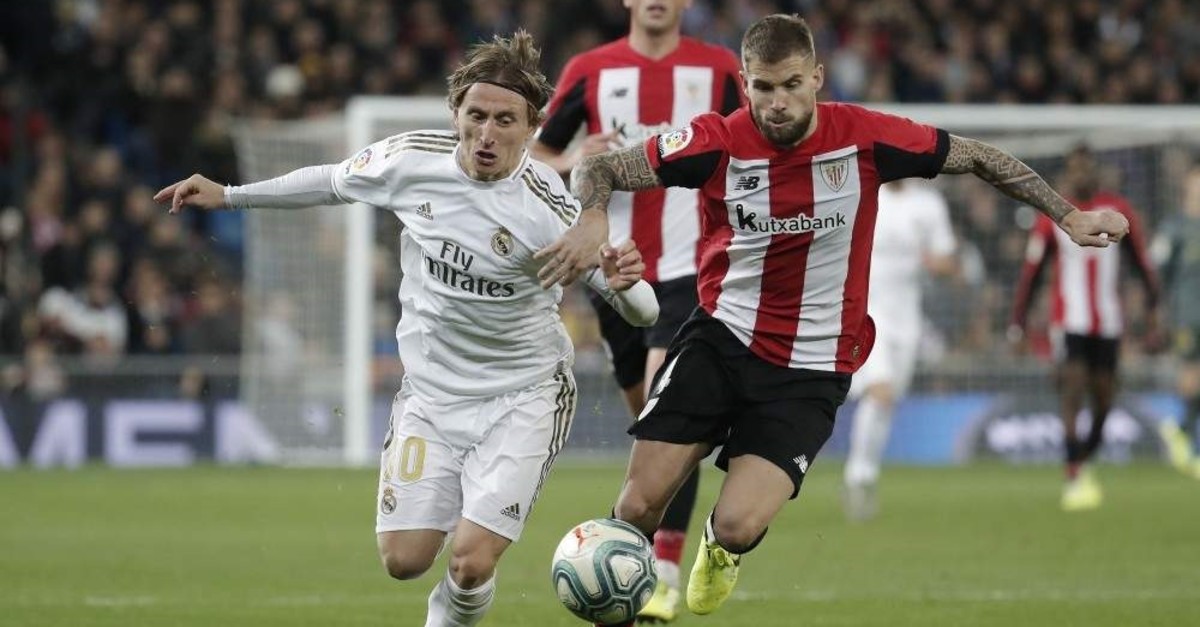 Real Madrid finished 2019 with growing concerns over its attack and trailing Barcelona by two points as the Spanish league starts its winter break.

Zinedine Zidane will face questions about Madrid´s scoring slump after it was held 0-0 at home by a tame Athletic Bilbao on Sunday. The slip at the Santiago Bernabeu came after drawing 1-1 at Valencia and 0-0 at Barcelona over the past week.

One goal in three matches is a paltry return for one of the richest clubs in the world. "Having had so many chances, we are a bit angry at ourselves, but this is football," Zidane said.

"In the last three games, we have had many scoring chances but few goals. I don't think it is bad luck or a lack of killer instinct. The important thing is that we are creating chances. We will keep that up, and the goals will come." The league resumes in the first week of January.

Madrid dominated possession but the goalkeeping of Unai Simon, the woodwork and the lack of a scoring touch saved Bilbao.

Toni Kroos, Nacho Fernández and Luka Jovic all sent shots off the goal-frame for the hosts. Simon stopped Vinicius Junior in front of his goal after the young Brazilian had cut back around the final defender in the game's first scoring opportunity in the 12th minute. Vinicius squandered two more opportunities, not cleanly connecting with Luka Modric's cross before he failed to control a loose ball in the goalmouth.

Simon deflected Kroos' point-blank effort in the 19th onto the crossbar after Bilbao's passive backline had let him advance through the box. Simon also saved shots on goal from Karim Benzema.

Bilbao's attack consisted of the rare long ball won by Iñaki Williams or a quick counterattack. Williams had Bilbao's only threat saved by Thibaut Courtois in the 20th.

Fernández smashed a header off the crossbar in the 59th shortly after replacing Eder Militao, who injured his right eye. Late substitute Jovic headed off the base of the post with four minutes remaining. "It was a hard-earned point," Simon said. "We were helped by the woodwork, but we did a good job and I think we did enough to deserve the draw."

Bilbao is in seventh place, immediately above Valencia.

Angel Correa again proved to be Atletico Madrid's ideal substitute when he went on in the second half to score one goal and set up another in a 2-1 win at Real Betis. Atletico's first victory in six league games on the road left it in fourth place and seven points behind Barcelona. Sevilla is third. Correa's first touch of the ball intercepted a pass from Alex Moreno and left him alone to round Betis goalkeeper Joel Robles and net the 58th-minute opener. The Argentina forward then passed for Alvaro Morata, who used the inside of his right boot to redirect Correa's low cross past Robles with six minutes to play. Marc Bartra scored for Betis in injury time. Atletico coach Diego Simeone praised Correa for his ability to come off the bench and revitalize the team. "I don't like the word 'supersub,' since he is an important player for us and has started matches, but when he comes off the bench he knows what to do. He has something special," Simeone said.

Real Sociedad withstood an attempted comeback by 10-man Osasuna to earn a 4-3 away victory that kept it one point behind Atletico in fifth place. Sociedad led by three goals after Mikel Oyarzabal, Cristian "Portu" Portugues and Martin Odegaard all scored in the opening half-hour. But Osasuna rallied to 3-2 before defender Facundo Roncaglia was sent off with a direct red card for elbowing an opponent in the face with 20 minutes left. Substitute Alexander Isak made it 4-2. Chimy Avila scored his second goal for Osasuna with an excellent solo effort, lifting the ball over a defender and heading it into the corner of the net in the 84th.

Celta Vigo stayed in the relegation zone after Levante got two goals from Roger Martí to erase Iago Aspas' opener and rally for a 3-1 win at home. Espanyol lost 2-0 at Leganés in a clash between the bottom two teams in the league. Last-place Espanyol is three points behind Leganes and five points from safety.