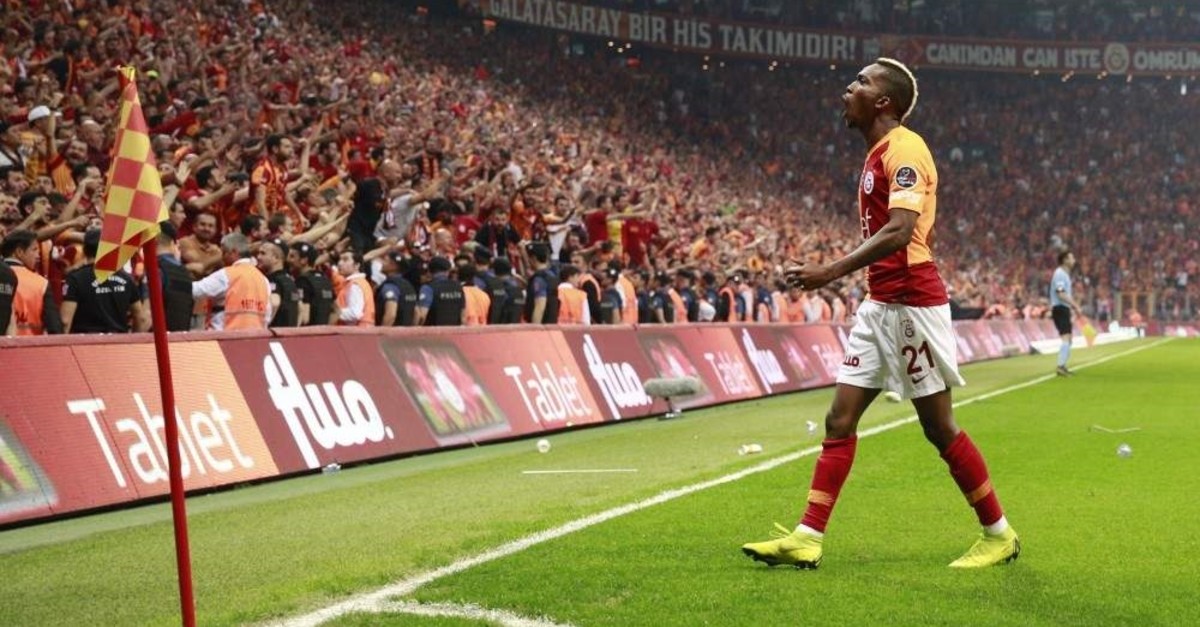 Galatasaray's Onyekuru celebrates after scoring a goal against Medipol Ba?ak?ehir, Istanbul, May 19, 2019. (AA Photo)
by Daily Sabah with DHA Jan 05, 2020 2:16 pm
Defending league champions Galatasaray are in a slump in the 2019-2020 season but they are hopeful they can put an end to this with new signings in the January transfer window.

The Lions, who closed the first half in seventh place, started midseason training while executives scramble for new faces. The club announced on Friday that they were negotiating with Henry Onyekuru and Marcelo Saracchi for loan deals.

Media reports say the Turkish club largely sealed a deal with Monaco for its former player Onyekuru for a six-month loan. Saracchi, Leipzig's 21-year-old left-back, is also a sure-fire deal according to Turkish sports outlets.

Martin Linnes, who joined Galatasaray from Norway's Molde but had his contract suspended as the Lions exceeded the quota for international players, will also return in the second half. Another returnee will be Mbaye Diagne who joined Club Brugge on loan in the first half of the season.

According to reports, Galatasaray is also interested in three other players. The Lions have set their sights on Eskişehirspor's Jesse Sekidika and Antalyaspor's Nazım Sangare. Mert Çetin, the Turkish player of Roma, has also been shortlisted by the club.

Galatasary will also see a string of departures and suspensions in the second half. French international Steven Nzonzi is among those set to depart from the team while Luyindama's contract is expected to be suspended due to long-term injury. The club is also looking at offers for Ryan Babel, Feghouli and Belhanda, though coach Fatih Terim has not approved the sales of the latter two yet. Florin Andone, who is expected to be back from a lengthy injury in March, will also be on the list of departures.
RELATED TOPICS