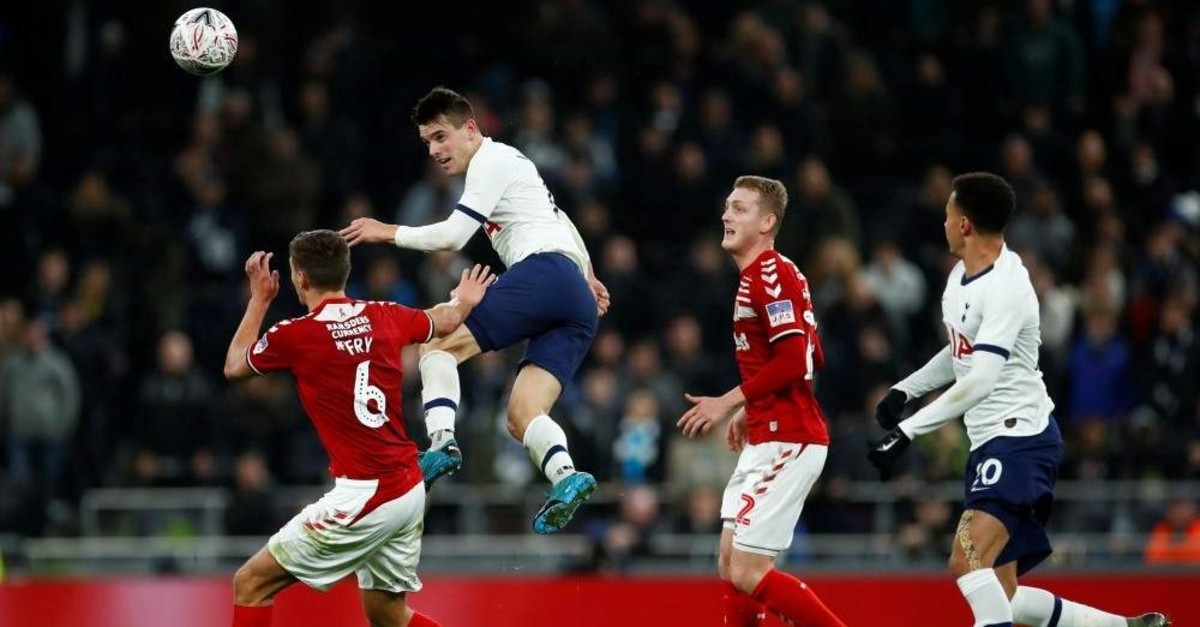 Tottenham edged into the FA Cup fourth round as Giovani Lo Celso bagged a rare goal in their 2-1 win over Middlesbrough, while much-maligned Newcastle striker Joelinton scored for the first time since August in a victory against Rochdale on Tuesday. Jose Mourinho's side almost killed off second-tier Middlesbrough within the first 15 minutes of the third-round replay at the Tottenham Hotspur Stadium. Lo Celso, on loan from Real Betis, got Tottenham up and running with only his second goal of the season and his first since a Champions League strike against Red Star Belgrade in November. It was an encouraging moment for the Argentine midfielder, who has endured a difficult season in north London. Tottenham needed a Lucas Moura equalizer at the Riverside Stadium to avoid a shock exit in the 1-1 draw at Middlesbrough earlier this month. But Mourinho still made five changes from last weekend's defeat against Liverpool, with Christian Eriksen, linked with a January move to Inter Milan, starting despite the Dane's form being affected by the transfer talk.

A gift from Middlesbrough keeper Tomas Mejias helped Tottenham open the scoring in the second minute. Mejias tried to play a quick ball out and ended up passing straight to Lo Celso, who ran across the area before firing into the bottom corner. Tottenham's second came when Argentina winger Erik Lamela sliced through the Middlesbrough defense before slotting home in the 15th minute. George Saville got one back for Middlesbrough in the 83rd minute as Tottenham survived a tense finale to earn a trip to Southampton. "I told my players at half time if we don't score 3-0 then at 2-1 we would be in trouble and it happened," Mourinho said. "The boys are trying their best. Is the FA Cup a priority now? In this moment it is not the priority. The priority is to play a difficult match against Watford in the Premier League."

At St James' Park, Newcastle wasted little time putting third-tier Rochdale to the sword as they booked a home date with League One side Oxford in the last 32 with a 4-1 win. Newcastle's FA Cup form is so bad that they have not gone beyond the fourth round for 13 years, have not won the competition since 1955 and last reached the final in 1999. They were never in danger of an embarrassing exit, in front of controversial owner Mike Ashley, after Rochdale defender Eoghan O'Connell turned Matt Ritchie's cross into his own net in the 17th minute.

Matty Longstaff doubled Newcastle's lead with a clinical close-range finish three minutes later. Miguel Almiron had put Newcastle in front in the 1-1 draw at Rochdale and he bagged the Magpies' third goal this time, seizing on a misplaced pass from keeper Robert Sanchez and slotting home in the 26th minute. In the 82nd minute, the beleaguered Joelinton converted a cross from debutant Tom Allan and showed his relief as he sprinted to hug Bruce on the touchline. That ended the Brazilian striker's 20-game goal drought and brought him a first goal at St James' Park since his move from Hoffenheim last year. "It's a hard job up front. The burden that comes on you can become difficult," Bruce said. "You never worry because you see him in training and know what he's got. Let's hope it gives him some confidence."

Coventry's 3-0 win against Bristol Rovers set up the unusual prospect of the League One side being the 'home' team against Birmingham in the fourth round, even though they are currently tenants of their local rivals at St. Andrew's. Watford's trip to Tranmere was postponed due to a waterlogged pitch caused by Storm Brendan.
RELATED TOPICS